Don't Bet On It!: Around the SEC

Share All sharing options for: Don't Bet On It!: Around the SEC

Ordinarily, I would be inclined to say that my 3-3 record in last week’s SEC prognostications sucks, but, fortunately, I have been enlightened this week regarding the new reality that 3-3 actually represents mere mediocrity with a heavy dose of positive progress! My season-long record for league forecasts now stands at 38-5, but last week’s lousy encouraging performance at least provides some suggestion that you should heed my usual advice: Don’t Bet On It!

UAB Blazers at Mississippi Rebels: The last time someone tried to arrange a football game between the Blazers and the Rebels was at Berkeley in the 1960s, when, instead of taking the field against one another, the Rebels began protesting the gridiron ground-acquisition game as a militaristic metaphor for U.S. involvement in Southeast Asia and the Blazers got high and asked each other if they’d ever really looked at a football. This time, I’m pretty sure there will be a game and I’m pretty sure Ole Miss will win it.

Mississippi St. Bulldogs at Middle Tenn. St. Blue Raiders: Mississippi State, we need to talk. You’re a Southeastern Conference football program. You’ve just hired Dan Mullen, who has brought new energy and new credibility to your school. You’re trying to establish yourself as something other than a perennial bottom-feeder. You’re playing on the road . . . against a Sun Belt team . . . whose name was misspelled on page 64 of this year’s Lindy’s SEC preview magazine (I’m just saying; if they’d misspelled Florida, someone would have caught it) . . . and whose mascot looks like this: 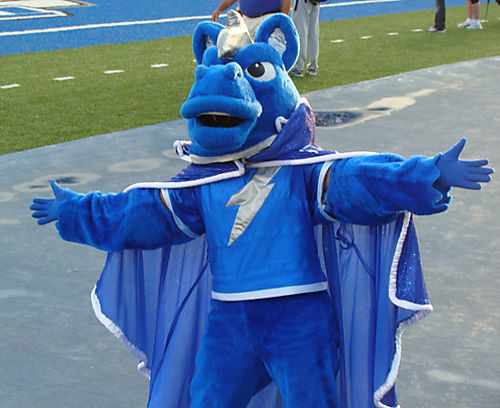 Mississippi State, it is time to rethink your entire approach. We’ll talk more after the Bulldogs beat the Blue Raiders.

Kentucky Wildcats at Auburn Tigers: Did you know that Kentucky ranks ahead of Auburn in pass defense, total defense, scoring defense, and first downs allowed? The Wildcats had better be ready to play some defense, because the Plainsmen lead the league in total offense and trail only the Gators in scoring offense and rushing offense. If you know anything about college football, or if you learned how to spell while earning a sociology degree from the Alabama Polytechnic Institute, you know that there is more O in the Tigers than there is D in the Wildcats. I’m taking the home team. I hate Auburn.

Arkansas Razorbacks at Florida Gators: I’m guessing Bobby Petrino won’t be changing planes in Atlanta on the flight from Fayetteville to Gainesville. I don’t mean to take anything away from the Razorbacks, who clearly are on the upswing, but this game is going to be a basic National Geographic Channel documentary. If you send a drove of swine into a swamp to tangle with a congregation of alligators, well, you’re going to have some stuffed Gators lazing around after feasting on pork.

South Carolina Gamecocks at Alabama Crimson Tide: If this game were being played in Columbia, I might be temped to pick Steve Spurrier and the Palmetto State Poultry to sneak up on Nick Saban and spring a nasty surprise on the Tide. (I swear, Gamecock Man, I’m not setting you up for a fall!) In Tuscaloosa, though, there’s no chance of ‘Bama being upset by a solid but not superb South Carolina squad. There’s simply no way a chicken can hope to beat an elephant if the elephant has home field advantage. The Gamecocks will hang tough for three quarters and probably will give Alabama the best game the putative Western Division champions have gotten all season, but, in the end, the Tide will roll.

Feel free to find fault with my conference forecasts in the comments below, but please be sure to heed my usual warning. Whatever you do . . . Don’t Bet On It!