It’s been a rough week in Bulldog Nation. Since Georgia’s underwhelming win in a ho-hum bowl game, the best news for the Red and Black has been the retention of existing assistants while our rivals have been upgrading their coaching staffs. Knowshon Rockwell Moreno and Matthew Stafford announced the decisions we all knew deep down were inevitable all along, and, no matter which way you were rooting last night, you were bound to be disappointed merely by the Classic City Canines’ absence from the game. Let’s face it . . . ever since the bottom of the third inning of game two of the College World Series finals, it’s pretty much stunk to be a Georgia Bulldog.

Hopefully, that creeping sense of malaise will begin to end tonight, when Suzanne Yoculan’s Gym Dogs kick off their 2009 campaign. 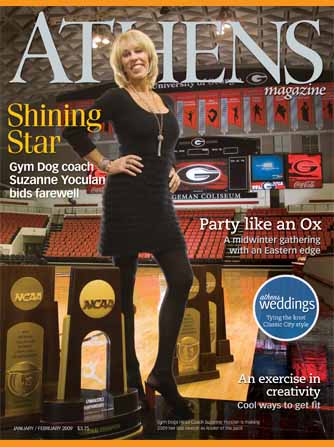 My suggestion for this year’s slogan was: "We use national championship trophies as doorstops."

Yes, we’re talking about women’s gymnastics. Why? Well, for one thing, the site is called "Dawg Sports," so I take it as a given that we’re supposed to cover more than just football. While our primary focus always will be between the hedges, there are other Red and Black squads, and they deserve our attention. If that’s not enough to sway you, here are five reasons why you ought to care about this season of Georgia gymnastics:

1. Courtney Kupets’s senior season. Courtney, whose sister Ashley was an all-American for the Gym Dogs, made her mark in her first year in 2006 by becoming the Red and Black’s seventh S.E.C. Freshman of the Year and joining Hope Spivey as the only Georgia gymnasts to win three N.C.A.A. individual titles in a single year. Kupets continued that success as a sophomore, winning the Honda Award in 2007 (when she was a first-team all-American in all five categories and an academic all-American) before seeing her junior campaign cut short by a torn Achilles tendon in last year’s meet with Arkansas. This winter, you’ll get to enjoy her triumphant return in her final year of collegiate competition.

2. Yoculan’s last stand. Coach Yoculan enters her 26th and final season with the Gym Dogs having achieved a level of success in her first quarter-century that virtually defies description . . . and I have a fairly extensive vocabulary. In that time, she has produced 804 victories, 16 conference crowns, 20 regional titles, nine national championships, 33 N.C.A.A. individual champions, and 57 individual all-Americans. Her teams have finished in the top three, either nationally or in the league, in each of her previous seasons. Coach Yoculan has achieved success at that extraordinary level while running her program with integrity. Her gymnasts graduate, do not transfer out of the program, and depart Athens as mentally and physically healthy young women, which is a remarkable achievement in a sport that often produces horror stories about the treatment some girls receive from their coaches. This is Suzanne’s last season; don’t miss the chance to watch one of intercollegiate athletics’ finest coaches in her final year on the job.

3. The chance for five straight national titles. That’s right, five. The Gym Dogs have captured four in a row, and, this year, they have an excellent shot at a fifth consecutive championship run to bring the school its tenth overall. Since women’s gymnastics became an N.C.A.A. championship sport in 1982, the field has been dominated by just four teams. Georgia’s gymnastics archrival---yes, we have a gymnastics archrival---Alabama has captured four national crowns, most recently in 2002. U.C.L.A. won five N.C.A.A. titles between 1997 and 2004, while Utah was the country’s principal power from 1982 to 1995, when the Red Rocks finished first in the land nine times in 14 seasons. The Gym Dogs have a chance to become the first program to win ten titles, and isn’t it nice to see a Georgia squad begin a season already knowing it has the ability to overcome injuries and justify its preseason No. 1 ranking? 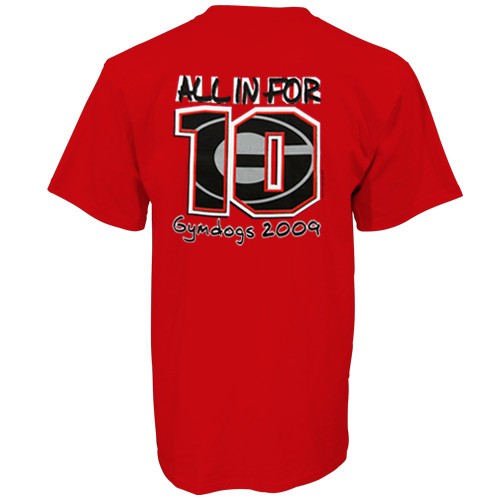 Get into the spirit of the season!

4. Commentary by Katie. Tonight’s season-opening meet against West Virginia will feature live streaming video and audio, with commentary provided by Katie Heenan Dodson. When last we saw Katie, she was in Omaha, cheering for then-fiance Stephen Dodson of the Diamond Dogs. Before that, she concluded a Georgia gymnastics career in which she was a 13-time all-American, a four-time all-S.E.C. selection, a two-time all-around champion, and the recipient of 2007 S.E.C. Gymnast of the Year, Southeast Regional Gymnast of the Year, and Georgia Sportswoman of the Year honors. I’m guessing she has a pretty good idea what she’s talking about when it comes to this sport.

5. A gymnastics meet is a great date event. Guys, I tell you this every January and I’m going to keep repeating it, because it’s good advice. If you’re a poor young male college student at the University of Georgia, ask a gal to go to the gymnastics meet with you tonight. It’s not your conventional dinner-and-a-movie date, so you’ll come across as a little more original than the average guy. Gymnastics is a nice blend of sporting event and performance art, so you get to see athletes performing at the highest level in a competition you can both enjoy, even if your date isn’t particularly a sports fan. You can interact during the meet while still getting into the action on the floor. The night will still be young when you’re done, and it’s cheap: student tickets are two bucks apiece and they’re on sale at the bookstore (9:00 a.m.-4:00 p.m.) and at the Coliseum (after 5:15 p.m.). For way less than the cost of dinner and a movie, you get to watch sports and have your date find you memorable and think you’re at least relatively cultured. That’s a win-win-win . . . and, when you add in the Gym Dogs’ record in home meets, it’s likely a win-win-win-win. Granted, I’m no Mike Leach, but trust me, that’s good dating advice.

Are you still sitting there looking at weblogs on your computer or your R.S.S. reader? For crying out loud, get up---O.K., click through to a few more pages first; we have our Sitemeter to think about, after all---and go buy tickets to the gymnastics meet. Be there in Stegeman Coliseum or follow the meet on-line, but let’s show our support for the Gym Dogs.