As National Signing Day approaches on February 4th, we'll be focusing a little more heavily on recruiting than usual. This post represents the latest in the TMI (Too Much Information) series of recruiting posts begun at MaconDawg's Blawg and continued here in the least creepy way possible.

I like offensive linemen. For one thing, experience tells me that among the various members of a football team the offensive linemen are usally among the most intelligent. They're also generally pretty interesting. Redshirt freshman lineman Jonathan Owens for example maintained a detailed personal website chronicling his recruitment and owns a Weinareiner named Maggie. While it's not an out of control Lego infatuation, that's pretty darned interesting from a human interest standpoint. Much like the time Darius Dawgberry witnessed Max Jean-Gilles eating an entire smoked chicken by himself at a postgame tailgate (Dawgberry still bears the mental scars from that episode by the way, but again, it was interesting).

Offensive linemen also toil in relative obscurity, which is truly unfair given their ability to influence the game. As we saw during the first half of the Alabama game this year, an outmanned offensive line can truly louse things up in a hurry. A good offensive line however can cover up a lot of ills. Like tailbacks who need a hole the size of a doublewide to be effective. Or John Parker Wilson as your quarterback (not that we're bitter or anything . . .).

While there's not a critical shortage of offensive linemen in Athens these days, you're never too far removed from a crisis at that position. That's why you have to restock every year with guys who can step into the trenches and prevent your quarterback from looking like he went 7 rounds with a change operated 2x4 dispenser, like so: 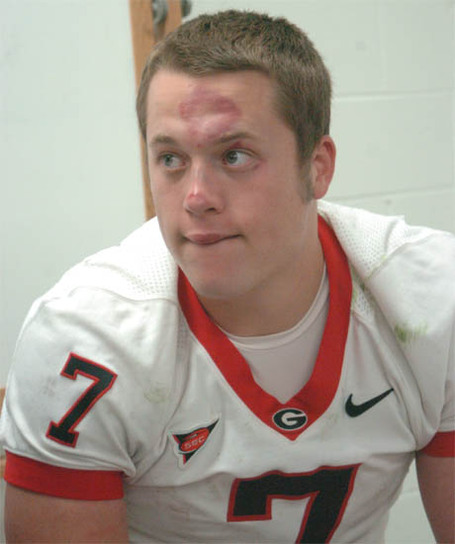 Which brings us to Buford lineman Dallas Lee. He's listed at 6'4 and 290 pounds, and checks in at #20 on UGASports.com's list of the 75 best players in Georgia. He also has a pretty kickass goatee. Offensive guard is the only position in which that counts as a definite positive.

And it's not the only positive for "Big D". You can see some junior footage of Lee from Dawgpost's Dean Legge here. The folks at Georgia Public Broadcasting also have generously placed the complete 2008 GHSA Class AA championship game, won by Buford here.

Lee comes from a winning program at Buford, a fact which I never underestimate. There's just something to be said for coming from a place that cultivates winning attitudes, and which is well known for its strength and conditioning program. I'm betting that Dallas Lee reported to Athens (yes, he's all early enrollee) in good shape.

He also passes one of the biggest tests I have for offensive linemen: he plays defense. A coach once told me that colleges should never recruit an offensive lineman who doesn't have the footowrk to also play on the defensive side of the ball. In this year's state championship game Lee positively eats up the Calhoun offensive line.

I also like the fact that he clearly has good upper body strength already. Even in the junior film from Deal Legge Lee's clearly moving folks around on the run and getting a good punch off the line.

But in the end, it's Lee's feet that are his best attribute. The kid moves very well for a 290 pound lineman, and appears capable of putting on some more weight. He'll get up to 315 or so without losing much of a step.

Lee plays guard in high school, but given Coach Searels' penchant for cross training linemen I'd expect him to also see time at center. Lee's too compact (read, short) to play tackle, but should be very good in close quarters. While I've seen some compare Lee to Clint Boling, I think the most apt comparison to a current Bulldog would be to center Ben Jones. Jones and Lee both have a nasty attitude, and will likely be physically very similar looking players. If Lee is as solid a contributor on the line as Boling has been, I think we'll all be pleased.