A Picture's Worth a Thousand Words (And Sometimes Several Million Dollars a Year).

Share All sharing options for: A Picture's Worth a Thousand Words (And Sometimes Several Million Dollars a Year).

I've watched with a bit of confusion these past few weeks as the University of Tennessee has assembled every single football coach in the Western Hemisphere in Knoxville, and assured us all that this will right their listing ship. I mean, unless one of these guys is going to crack Jonathan Crompton over the head and steal his uniform or lock Eric Berry in his apartment next January so he can't mail in his NFL Draft paperwork, I'm not yet sold.

I haven't really been able to crystallize my thoughts on the subject, though. I've been beset by a vague sense of "meh" about the Vols' new skipper and his crew of first mates. And then I got an email with an image that nicely summarized my feelings on the new Tennessee coaching staff. From Motivational Buck, one of my (and Doug Gillett's) favorite web hangouts, I give you, the Volunteer Brain Trust: 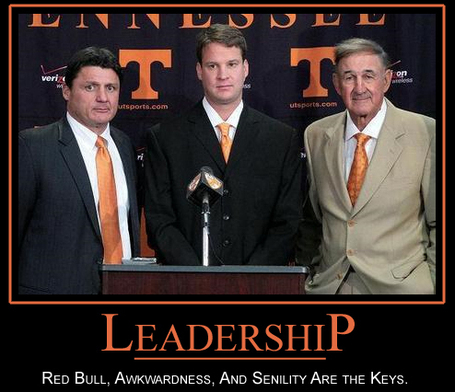 If you photoshopped in a yarmulke or two, you could easily convince me this was taken at the kid in the middle's Bar Mitzvah.

I also ask, is it still appropriate to refer to them as "Volunteers" when you have to pay them a gajillion and a half dollars? I think it's a fair question. Until later . . .