It’s not that last week’s performance was bad; quite the contrary. It’s just that the win over Georgia Southern seemed to fall somewhat short of the hype. Saturday’s victory between the hedges, though, represented both a step up in the weight class of the opposition and a step-up by the Bulldogs, who looked yesterday like what they will be on my BlogPoll ballot tomorrow . . . namely, the No. 1 team in the nation.

From the booth, Mike Bobo called one of the best games of his brief career as his alma mater’s offensive coordinator, methodically building a 21-0 lead before Demarcus Dobbs’s 78-yard interception return appeared to break the game wide open. After the Chippewas clawed back to within two touchdowns on their first drive of the third quarter, Georgia did not hesitate to go for the kill; two plays, 62 seconds, and one 52-yard Knowshon Rockwell Moreno run later, the Red and Black had resumed a comfortable 35-14 lead.

From there, it was all Bulldogs. Central Michigan managed only a 30-yard field goal as the Classic City Canines pounded out three more touchdowns. An inopportune fumble on a poor center-quarterback exchange to second-stringer Joe Cox probably deprived Richard Samuel of his second score of the game, but that was one of few flaws exhibited by the ‘Dawgs on this day. 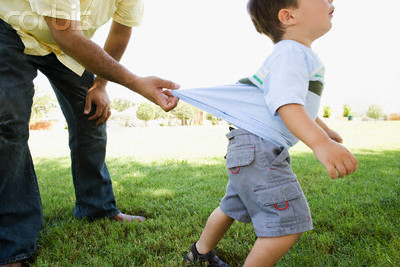 On the other hand, one of the flaws exhibited by the officials was their apparent ignorance of the fact that this is holding.

Much-ballyhooed double-threat signal-caller Dan LeFevour got his passing yards because Willie Martinez gave them to him in a swap the Georgia defensive coordinator was happy to make in the course of holding C.M.U. (Coach Martinez’s last stop on the road to Athens, incidentally) to 59 rushing yards and 2.7 yards per carry. Matthew Stafford, not hitherto known in these parts as the second coming of Fran Tarkenton, ran for more yards (25) than LeFevour (19), including a 22-yard scamper on third and long deep in Bulldog territory to sustain a scoring drive.

Stafford’s run produced one of 25 Red and Black first downs and represented one of the nine conversions the Athenians managed on a dozen third-down tries. The Chips, by contrast, saw their high-powered offense limited to 17 first downs and a mere half-dozen conversions on 15 third downs. Four of Central Michigan’s first five drives failed to produce so much as a single fresh set of downs.

The Bulldogs racked up 552 yards of total offense and demonstrated impressive balance in the process, throwing for 289 and rushing for 263. Moreno could do no wrong, averaging over nine yards per carry, collecting 168 yards and three touchdowns in 18 rushes, and at one point causing me to wonder whether Larry Munson was up in the booth yelling, "He’s jumping over people!" Moreno added 30 receiving yards on three catches for good measure.

Samuel made the most of his eight touches, racking up 44 yards and a score . . . which, based upon the third-string tailback’s reaction to the late turnover, was one touchdown too few in his book. When Caleb King’s 4.0 yards-per-carry average brings up the rear among the Bulldog backs, the ground game has had a good day. 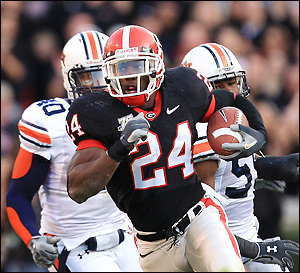 Let’s not slight the passing attack, though. Cox came into the game late and the offense barely missed a beat. The backup quarterback threw five passes for five completions and 76 yards. Aside from a drop by Kris Durham over the middle, the ‘Dawgs looked sharp through the air all day. A.J. Green and Mohamed Massaquoi lived up to their billing and both Michael Moore and Israel Troupe had good games.

No, the game wasn’t flawless. Georgia was set back 70 yards on nine penalties, although much of Central Michigan’s limited success came on some questionable no-calls by the officials. The special teams were not as strong as we have come to expect, as the directional kicks Blair Walsh has been instructed to make yielded more and bigger returns than are acceptable. I agree with the always insightful SG Standard: if we can put it out the back of the end zone, why don’t we?

These, though, are decidedly minor quibbles. Georgia closed the deal in dominant fashion, producing a game which was fun not only for the fans but (judging by the dancing on the sidelines during a T.V. timeout and by the good-natured ribbing dished out by Dobbs during the postgame show) also for the players.

On a day on which Southern California and Louisiana State both took the afternoon off (the latter, by necessity; the former, by design), Ohio State struggled mightily with overmatched Ohio (Ohio) in the national game of disinterest, and Florida led depleted Miami (Florida) by six points after three quarters before classlessly leaving Tim Tebow in the game to tack on trash (and trashy) points at the end, there appeared to be no genuine challengers to Georgia’s standing atop the sport outside of a couple of strong performers in the Big 12. (No, Texas and Texas Tech, I’m not talking about you!) 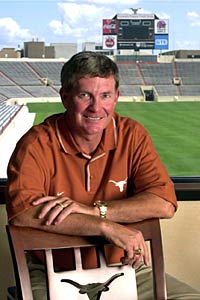 Beyond that, here are a handful of other random observations regarding the Saturday just behind us:


It’s great to be a Georgia Bulldog.