Too Much Information: Central Michigan

Share All sharing options for: Too Much Information: Central Michigan

As longtime readers of Dawg Sports know, it is my custom just prior to the Bulldogs’ weekly outing to preview Georgia’s upcoming opponent in full statistical detail---sometimes in positively excruciating statistical detail, in fact---but there’s a problem with doing that this early in the season.

At this point, there are no statistics, not to speak of, anyway, so what do I have to offer that Quinton McDawg and Doug Gillett didn’t tell you already?

That was a rhetorical question. I’m sure I’ll come up with something.

Dan LeFevour draws numerous comparisons to Tim Tebow, but one similarity that rarely receives adequate attention is the fact that neither has anywhere to go but down. LeFevour came in off the bench in the Chippewas’ 2006 season opener (a near-upset of Boston College in Mount Pleasant) and proceeded to set an N.C.A.A. record for pass attempts by a freshman before exploding in a sophomore season that was the statistical equal of the Gator Golden Child’s. What will he do for an encore? 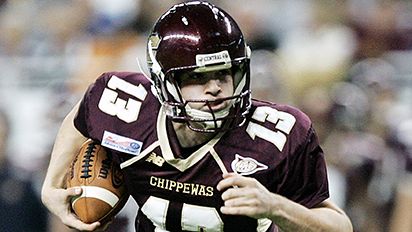 In regular-season road outings against B.C.S. conference competition, though, LeFevour and his teammates on the offensive side of the ball have enjoyed little success, at least in the only aspect of the game that actually counts: scoring points. In LeFevour’s two years under center, the Chips have notched 17 points at Michigan, 36 at Kentucky, seven at Kansas, 22 at Purdue, and 14 at Clemson . . . the moral of the story being, if you play in a big-boy league and your defensive coordinator isn’t Mike Archer, you have it in you to shut down C.M.U.

That isn’t the phase of the game that ought to be of greatest interest to Red and Black partisans, however. The Chippewas will get their yards in Sanford Stadium on Saturday, and they will even get their points, to a degree we will find maddening at the time before realizing afterwards that Willie Martinez and his staff had this game in hand from the outset.

No, our focus ought to be on the Georgia O. In the aforementioned five road outings against B.C.S. conference competition in the Dan LeFevour era, Central Michigan surrendered 41, 45, 52, 45, and 70 points, respectively. As we have seen demonstrated repeatedly over the last seven-plus seasons---up to and including last Saturday---Mark Richt is too classy a guy ever deliberately to hang half a hundred on an overmatched opponent, but, unless the Chippewa D displays a stoutness not hitherto seen in recent seasons, the ‘Dawgs may break 50 for the first time since the 2004 Kentucky game in spite of themselves.

Why not? The Classic City Canines have been flirting with the big five-oh for a while now, having broken 40 in five of their last seven games. Don’t get me wrong; I don’t want us to open up a can just because we can, but, against an opponent as capable of scoring at any time as C.M.U., C.M.R. may want to unleash Mike Bobo. 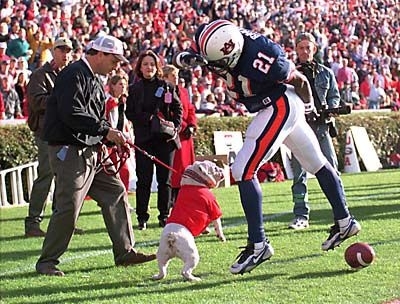 You know . . . the way I’d have unleashed Uga had I been the guy in the cap standing on the left-hand side of this picture. I hate Auburn.

It’s hard to gauge how good a team is based solely upon a season-opening outing against Division I-AA competition, but the early returns from Central Michigan’s first game versus Eastern Illinois were a mixed bag for the Chippewas. The Panther D held the home team to 389 yards of total offense and stopped the Chips on both of their fourth-down attempts. C.M.U.’s 7-for-14 performance on third down barely outpaced E.I.U.’s 6-for-14 stat line.

Likewise, Eastern Illinois quarterback Bodie Reeder (which may or may not be the best way to receive the Dawg Sports R.S.S. feed) played toe-to-toe with LeFevour: Reeder hit 19 of 28 attempts for 201 yards (7.2 yards per pass) while LeFevour went 21 for 31 for 217 yards (7.0 yards per pass).

Even though the Panthers were forced to settle for a pair of 29-yard Tyler Wilke field goals, E.I.U. held C.M.U. to a three-and-out at the start of the fourth quarter and went on a five-play, 44-yard touchdown march to cut the Chippewas’ lead to 12 points. I’m feeling pretty good about the ability of Matthew Stafford and Joe Cox---who, between them, completed 17 of 27 passes for 323 yards (12.0 yards per pass)---to fare pretty well against the Central Michigan defense.

A final point bears making about the Chips, who play their home games at Kelly/Shorts Stadium. The facility was named for C.M.U. coach Bill Kelly and C.M.U. alumnus and benefactor Perry Shorts, making it second only to Purdue’s Ross-Ade Stadium as the college football venue that most sounds like its name was the result of an ill-conceived corporate sponsorship deal, but wasn’t.

Central Michigan represents a significantly tougher test than Georgia Southern and I expect the visiting team to gain far more than the 290 yards of total offense conceded to the Eagles. However, another 500-plus yards and 40-plus points ought to be on tap for the Bulldogs this weekend, as well. The score will be similar to last Saturday’s but the Chippewas’ points will not come at garbage time, so expect a few nervous moments along the way to a convincing yet not overwhelming victory.