I truly appreciate the efforts of the faithful to cheer me up in the wake of Black Saturday. DavetheDawg assures me that it will be all right. Jmac, whom I finally met face-to-face at the Tent City tailgate, offered some thoughtful reassurances. Scott Hartman, one of the hosts of said tailgate, did what he could with his podcast. Stuck in the Plains kindly directed us to an admittedly blurry photograph of RedCrake’s sign. (By the way, I’d love to get a better screen capture of it, if anyone taped "GameDay" . . . or, in the alternative, if anyone is willing to come over to my house and show me how to capture a screen shot of my D.V.R. recording of "GameDay.")

Despite everyone’s best efforts, though, I remain convinced that life is a tale told by an idiot, full of sound and fury, signifying 31 to nothing at the half. I believe this even though my 5-1 record in last weekend’s S.E.C. prognostications improved my league ledger in predictions for the season to 33-6, a record which is vastly inflated by early-season patsy games. In other words, don’t doubt that I’m bad at this, because, now that conference play is underway, believe me: I’m not kidding when I warn you . . . Don’t Bet On It!

All of this weekend’s Southeastern Conference games are being played on Saturday, because we’re the S.E.C.; we don’t need no stinking Thursday! Dude, get your priorities in order! Here are the clashes involving squads from the league:

Northern Illinois at Tennessee: That big, doughy thud you heard last weekend was the sound of Rocky Top hitting rock bottom. When Jonathon Crompton’s pass to Gerald Jones was stopped short of the end zone on the would-be game-tying two-point conversion attempt, the Vols dropped to 1-3 overall and 0-2 in the league. What, then, are we to expect in Knoxville this weekend? Well, I, for one, am hoping for octuple-overtime, but that isn’t exactly the most likely scenario. The better guess is that the Big Orange are looking for an inferior opponent upon whom to take out their considerable frustrations. Any Volunteers? 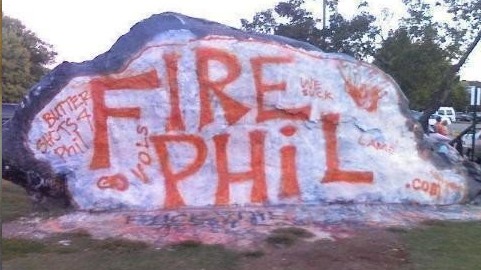 Phil on the rocks? Ain’t no big surprise.

Florida at Arkansas: I have a solution to the gas shortage in Georgia. (No, not the repeal of the price-gouging statutes which prevent the operation of the free market from creating a financial incentive for companies to transport gas here so we can buy it for a price we’re willing to pay; I’m trying to make a smart-aleck joke here, do you mind?) Now, where was I? Oh, yeah: I have a solution to the gas shortage in Georgia. Line up a row of empty barrels at midfield the instant the game ends and, when Urban Meyer shakes hands with Bobby Petrino, grab both men’s wrists, twist them, and squeeze out enough crude from these two oily operators to keep the Hummers humming from Dalton to Bainbridge. The Gators are mad, the Razorbacks are bad, and Florida will romp in Fayetteville . . . or Little Rock . . . or Evening Shade . . . or wherever the heck they’re playing this game.

South Carolina at Mississippi: Moving from the game that features the two smarmiest characters in the league to the game that features the two fellows who used to coach their current schools, we turn our attention to Oxford, where a couple of teams looking to revive their fading football fortunes by hiring head coaches who had been successful within their own divisions will square off with one another. (That was some interesting grammar there, Kyle.) The Gamecocks haven’t looked great, but they’ve been solid defensively and they haven’t been truly disastrous on offense. (That’s a low standard, I know, but at least 25 per cent of the S.E.C. fails to meet it on a weekly basis.) The real question for Ole Miss while playing at home after a big win is whether the Rebels can handle prosperity after an extended stretch of adversity. The Rebs have had some close scrapes in recent years, but, before last Saturday, they hadn’t recorded a truly eye-opening victory since . . . when? Florida in 2003? South Carolina in 2004? Is Ole Miss ready to win meaningful outings in back-to-back games? Ah, what the heck . . . the Rebels with a cause will be frying chicken in the Grove after the game.

Kentucky at Alabama: I hate to have to bring this up, really, I do---hey, it’s not like I haven’t sided with the Wildcats in some big games---but there was this one time that U.K. went up against a Nick Saban-coached team from the Western Division, and, well . . .

. . . um, yeah. So, like, that same thing almost got done to Kentucky this year by Middle Tennessee. Yeah, the Tide are going to roll.

Auburn at Vanderbilt: "College GameDay" will be in Nashville for this clash of ranked teams. Now go stand in front of a mirror, look yourself in the eye, and try saying, "Our civilization is not on the verge of total collapse!" You won’t be able to do it. That’s right, ladies and gentlemen, the Vanderbilt Commodores---who rank dead last in the S.E.C. in total offense (282.8 yards per game) and dead last in the S.E.C. in total defense (364.2 yards per game allowed)---are in sole possession of first place in the Eastern Division . . . and the ‘Dores rank ahead of the Plainsmen in scoring offense. (Vandy averages 10 points per game more than the Tigers.) Also, the game is in Nashville . . . and the Commies are coming off of an open date . . . egad! I’m really going to do it! I’m actually picking Vanderbilt to beat Auburn!

All right, now I’m talking crazy, so it’s time to bring this to an end. Surely, if I’m doing something as altogether nutty as forecasting a Commodore win over the Plainsmen, I have gone completely around the bend. It need hardly be said, therefore: Don’t Bet On It!