As I mentioned last week, "Too Much Information" is a segment that dates back to my days co-hosting "The Dawg Show" on local cable access in Henry County from 1999 to 2004. Each week, I did a short rundown of some statistical but mostly historical minutiae of which viewers likely were unaware.

(In a way, "Too Much Information" ultimately was the genesis for Dawg Sports: "The Dawg Show" was on only locally, and I invariably compiled too much information---hence the name---for a 22-minute telecast, so I typically typed up the results of my research and e-mailed it to various friends and family members, many of whom forwarded it along to friends and family members of theirs. Ultimately, those e-mails found their way to Paul Westerdawg, who wrote to me and said, "You should start a weblog.")

In any case, I am starting to steer "Too Much Information" back to its historic roots. Why? Because there are better football minds than mine breaking down the X’s and O’s---viz., Michael, Ell, Doug Gillett, Senator Blutarsky, Cock’n’Fire, Quinton McDawg, and (egad!) Chris Brown on Nick Saban and Dr. Saturday on Knowshon Rockwell Moreno---and a visiting ‘Bama fan has already started a discussion of the position matchups, so I’d rather stick to my strengths and give you some historical background with which you might not have been familiar and a scattering of numbers you might not hitherto have known. 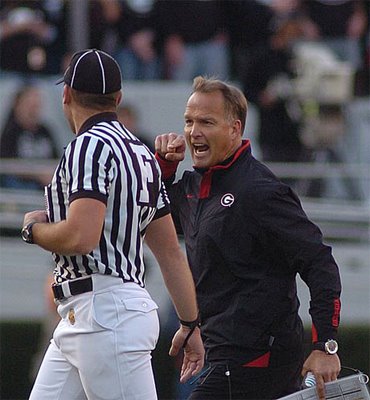 For instance, were you aware that there is a division among ‘Dawg fans whether we ought to call him "Evil Richt" or "Dark Richt"? 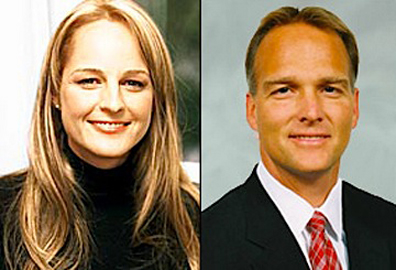 This has nothing to do with anything, really, but I just ran across the foregoing image at The Wizard of Odds, and, let me tell you: I, along with everyone who has ever watched a Georgia football game and an episode of "Mad About You" with me, find this truly disturbing on multiple levels. 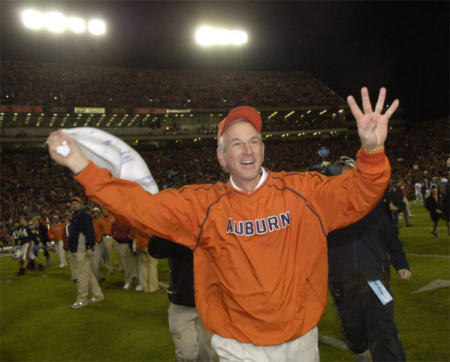 The following Feel Good Stat of the Week was brought to you by the people’s national champion.

The Feel Good Stat of the Week: Since last year’s embarrassing loss to Tennessee lit a fire under the Bulldogs, Mark Richt has crossed paths with five national championship-winning coaches: Florida’s Urban Meyer, Georgia Tech’s Chan Gailey (who won one at Troy), Georgia Southern’s Chris Hatcher (who won one at Valdosta State), South Carolina’s Steve Spurrier (who won one at Florida), and Arizona State’s Dennis Erickson (who won two at Miami).

Georgia’s record in those five games? 5-0. Say, does anyone know whether Nick Saban has ever won a national championship?

The Bottom Line: I’ve gone back and forth all week long about this one. At first, the two teams appear so evenly matched that a classic low-scoring S.E.C. slugfest appears inevitable, with a close victory going to the team that most effectively runs the ball and stops the run. Then, I think about the injuries on the Bulldogs’ offensive and defensive lines, at which point I begin to wonder whether the Classic City Canines are about to be exposed. Then, I think about how overrated Clemson is and how awful Arkansas is, at which point I start to think that ‘Bama is a paper tiger elephant unprepared to face the buzzsaw the Crimson Tide will be walking into in Sanford Stadium on Saturday night.

There have been comparisons drawn in the blogosphere between this game and the 2004 Tennessee game; namely, the ‘Dawgs were coming off of an emotional win (over Louisiana State four years ago, over Arizona State last weekend) and they came out flat. Anyone who believes such a thing was not watching Georgia’s victory in Tempe, for which the best description was "workmanlike." The Bulldogs certainly didn’t put all of their emotional eggs into the basket of Sun Devil Stadium; theirs was a victory of poise, not passion.

That bodes well for this weekend, particularly if Mark Richt’s demeanor throughout the week has been any indication. To the extent that a head coach’s attitude filters down to affect his players’ mindset---and surely Nick Saban provides ample evidence that this extent is considerable---I am encouraged by the sense of humor Coach Richt has displayed before the news media. (To give credit where credit is due, Coach Saban exhibited similar cleverness in beginning the week with an attempt to defuse any potential advantage provided by the blackout.)

The tangibles are more or less equal, which is where the intangibles come into play. At home, at night, in front of a crowd that is going to be stoked by the presence of "College GameDay" as never before and the repeat of the blackout exactly as before, with their emotional capital remaining in the bank after a road win hallmarked by efficiency instead of energy, staring at a clear path to the No. 1 ranking after Oregon State obligingly took care of Southern California while wearing the butt-ugliest uniforms ever to have been donned by an unranked team on the verge of upsetting a top-ranked squad, the Bulldogs hold the advantage in all the immeasurable categories that make college football so unpredictable and enjoyable.