Now that I have given you this week’s S.E.C. predictions and national forecasts, just one game (other than Georgia’s, obviously) remains to be addressed. I am speaking, of course, of the national game of disinterest.

No true college football fan needs me to explain the sport’s ability to generate passion and excitement; here, virtually on the eve of the Bulldogs’ showdown with Alabama between the hedges, the game’s hold on our hearts and minds speaks for itself.

Unfortunately, not every college football contest can rise to this level. In fact, each week, there is one outing so uninspiring and inconsequential that it provokes in me nothing except utter indifference. This game is consigned to a place of shame and ignominy as the national game of disinterest.

By singling them out two weekends in a row, I don’t mean to give the Huskies a hard time . . . I mean, apart from the fact that I think it’s generally a weird idea to have a Division I-A college football team in a B.C.S. conference located in the Nutmeg State in the first place. When your state is known as the Land of Steady Habits, you’re probably not a haven for the kind of hot-blooded fan lunacy that makes for great college football.

I certainly don’t mean to pick on Louisville, even though Steve Kragthorpe appears to me to be an amalgamation of Brian VanGorder’s intensity and Mike Shula’s cluelessness brought over from the evil parallel universe in which everyone has a goatee whether they need one or not. The only reason Steve Kragthorpe isn’t the worst recent coaching hire in the Big East is that Bill Stewart is a recent coaching hire in the Big East. As it is, Coach Kragthorpe has a name that sounds like a spelunking term and a resume of taking a successful program downhill in a great big hurry that is almost Ray Goff-like in its rapidity. I know that’s harsh, but it’s true.

Why, then, is this the national game of disinterest? For one thing, there’s a part of me that says, "Any conference game in which the rivalry was fueled by a fair catch call probably isn’t that great a matchup."

Mostly, though, it’s the fact that (once again) it’s messing with my Friday night.

I get that teams with lower levels of name recognition try to gain exposure by agreeing to play non-Saturday games on the Worldwide Leader. Does it have to be Connecticut clogging up my screen on Friday night, though? Connecticut? 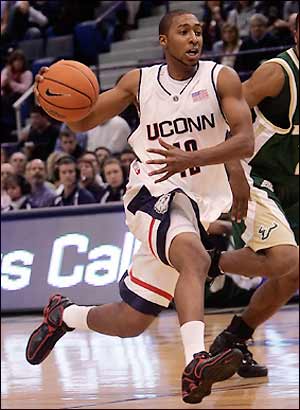 This weekend’s Conference USA schedule includes Houston at East Carolina and Central Florida at U.T.E.P. Are you telling me the Cougars and the Pirates wouldn’t make for better Friday night fare than this? Can you honestly claim that you’d rather see U.Conn. and U. of L. than the Knights and the Miners? I mean, who doesn’t enjoy a good U.T.E.P. game?

Fine, though; maybe you really had your heart set on some Friday night Big East football. Wouldn’t you rather take in the Cincinnati-Akron duel to settle once and for all which is the best program in a city in Ohio you would never, ever visit in a million years? Wouldn’t South Florida’s trip to N.C. State qualify as a more exciting viewing option? Doesn’t Pitt at Syracuse at least have train wreck value?

But Connecticut at Louisville? This was the best ESPN could do? It’s bad enough I have to watch it; surely I shouldn’t have to pick it, as well.

Coming Soon: Too Much Information.