I’ve already set forth this week’s S.E.C. picks, so it’s time now to turn to the national games of interest. Because last week’s national picks contained more rhyme than reason, my non-S.E.C. record for prognostications plummeted to a middling 16-10 after a dismal second straight 2-4 showing on my part, so surely I don’t have to remind you . . . Don’t Bet On It!

Each of this week’s games will be played on Saturday, September 27, unless otherwise indicated. These are they:

Texas Christian at Oklahoma: Lost amid all the hoopla surrounding the likes of Boise State, Brigham Young, East Carolina, and Utah is the fact that the Horned Frogs very quietly have put together a 4-0 record to begin the autumn. After spending the years immediately following the breakup of the Southwest Conference as a vagabond program wandering from league to league, T.C.U. looked for a while like the class of non-B.C.S. programs as the Frogs posted four seasons of double-digit wins in a five-year span between 2002 and 2006. Nevertheless, it wound up being the Utes, the Broncos, and the Warriors who crashed the gates of the Bowl Championship Series while Gary Patterson’s squad settled for Lone Star State bowl berths with short histories and little prestige. Still, Texas Christian often has given as good as it’s gotten against the big boys of the Big 12, claiming wins over Oklahoma and Iowa State in 2005, Texas Tech in 2006, and Baylor in 2006 and 2007. Does that mean the Horned Frogs are for real? Do they really have the toughest defense the Sooners will face all season or are they feasting on weak competition? T.C.U. won in Albuquerque over a New Mexico squad that beat Arizona and lost narrowly to Texas A&M; the Frogs also defeated a Stanford squad that defeated Oregon State and beat Southern Methodist in Dallas by a wider margin than that by which the Red Raiders beat the Mustangs in Lubbock. In short, Texas Christian is a real team that will give Oklahoma a good game for a while, but the home team will pull away later if not Sooner. 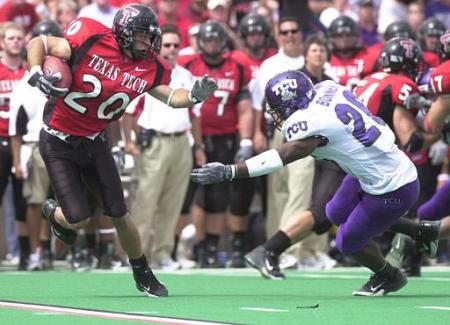 Don’t think I won’t be pulling for the Horned Frogs to exact a little more well-deserved revenge for their having been left out of the Big 12, though.

Colorado at Florida State: This would have been a heck of a ballgame in the early 1990s, back when Bill McCartney and Bobby Bowden were still coaching. After building Boise State into a powerhouse, Dan Hawkins took over a Buffalo program in decline; Gary Barnett’s last squad posted back-to-back late-season losses to Nebraska and Texas by a combined 100-6 margin. Coach Hawkins dropped 12 of his first 15 decisions after arriving in Boulder, but the Buffaloes have gone 8-5 since. Meanwhile, the Seminoles are moving in the opposite direction. The depth of F.S.U.’s malaise is difficult to overstate. The team from Tallahassee never lost more than two games in any autumn from 1987 to 2000; the ‘Noles have not lost fewer than three games in any of the seven seasons since and they have come up short five or more times in four of their last six campaigns. Most damning of all, though, is this datum: Florida State has lost three straight games to Wake Forest and has done so because Wake Forest is a better program. Try as you might, you will never truly be able to wrap your brain around that reality. Nevertheless, the trajectories are set and the writing is on the wall: Colorado will stay the course with a win over the fallen former power that has become the joke at Doak.

Wisconsin at Michigan: Since we here in S.E.C. country apparently don’t follow Midwestern football scores (I kid; for what it’s worth, the Sanford Stadium scoreboard shows scores of interest nationally, including games involving ranked teams, irrespective of league affiliation), I eschewed picking the Illinois-Penn State and Minnesota-Ohio State games, but I couldn’t resist the temptation to pick this one. Why, just look at the respective combatants’ logos: 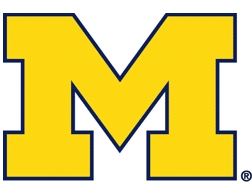 Although some commentators find these logos boring, they’re like Midwestern drama masks, representing the yin and yang of Big Ten football: Michigan’s logo is a no-nonsense block M, drab in color and determinedly unadorned; Wisconsin’s is its polar opposite, as though the block M were flipped over, given vibrancy of hue and a flourish to add a dash of personality. Unsurprisingly, these symbols respectively embody the program that has made an art form of grousing about luxury boxes, music over the public address system, and people who stand up to cheer during games---in sum, the program that is determined to look dour in the face of anything that might smack of joy for the game---and, at the other end of the spectrum, the program from the drinkingest college town of them all, where the fans literally jump around in the stands. The team for whom Badger is a mascot strikes a blow for fun by invading Ann Arbor and defeating the team for whom badger is a verb.

Fresno State at U.C.L.A.: Give the Bruins their due; Rick Neuheisel’s club is an accommodating bunch, even if the new coach is lobbying Congress for a quarterback bailout. Not only is U.C.L.A.’s athletic department going out of its way to invite Bulldog fans to the Rose Bowl, but the Bruin defense charitably has surrendered a total of 100 points in its last nine quarters of regulation play. Now may not be the best time for U.C.L.A. to host an F.S.U. squad coming off of a double-overtime victory in which Pat Hill’s club racked up 55 points on Toledo. Bulldog teams have done well lately when playing in Pac-10 stadiums, so I like Fresno State to confirm that the football monopoly in Los Angeles is, in fact, over, at least as long as the fellows from the Raisin Capital of the World are in town.

Virginia Tech at Nebraska: Although the Hokies may be the default pick to win the A.C.C. championship whenever the general mediocrity of the league leaves no team looking like a frontrunner so much as a backrunner briefly lagging ahead of its conference coevals while straining mightily to fall back to the pack as alacritously as possible, it is clear that even being the best team in the Atlantic Coast Conference ought not to count for nearly as much as being an average-to-decent team in a strong Big 12. Offhand, I can’t recall the last time the Cornhuskers won what I would characterize as a big game---surely, victories over the 24th-ranked Cowboys in 2003, the 23rd-ranked Cyclones in 2005, and the 24th-ranked Aggies in 2006 wouldn’t really qualify---and, while this one only marginally makes the grade, it still represents an important step in the right direction for a proud program trying to reclaim its standing. If last year’s Nebraska win at Wake Forest is any indication, we shouldn’t expect the ‘Huskers to win any other way but ugly against an A.C.C. contender, but, seeing as how that aforementioned 2007 victory over the Demon Deacons was by the 20-17 final margin so familiar to the Hokies, I like Nebraska to emerge triumphant undefeated from a low-scoring slugfest to determine which team is the more overrated on the basis of name recognition. 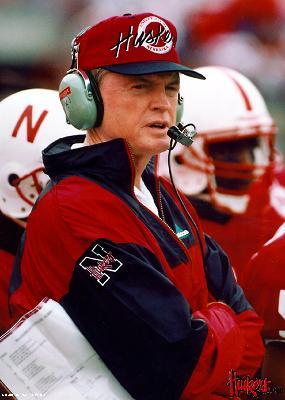 Try and do things the way you did them when this guy was coaching. Except for that part about going to Florida for the holidays and losing to a speedy Southern team every year, I mean.

Southern California at Oregon State (Thursday, Sept. 25): I will confess to having a vested interest, emotionally and otherwise, in the belief that this truth is a trend, but it is a fact that the Trojans, while being dominant against all out-of-conference comers in recent seasons, have had a habit of slipping up against Pac-10 competition lately. If U.S.C. could stumble against the Beavers and the Bruins in 2006 and against the Cardinal in 2007, the Men of Troy can come up short against a Pac-10 team somewhere along the line this year, right? While that remains a possibility---Southern California plays eight straight league games, half of them on the road, starting tonight and continuing through November 15---the fact is that Pete Carroll’s bunch doesn’t appear to have missed a step and the rest of the conference has slipped. The Trojans will cruise in Corvallis.

Those are my picks, but, to reiterate, I stink at this. After back-to-back weeks in which my prognosticating was positively abysmal at the national level, you ought to realize that I’m not kidding around when I tell you not to take these forecasts seriously, but, just in case, I’m going to remind you yet again. Whatever you do . . . Don’t Bet On It!