It’s Wednesday morning and all is well in Bulldog Nation generally and at Dawg Sports in particular. The ‘Dawgs beat Arizona State, A.J. Green is the And The Valley Shook Southeastern Conference Offensive Skill Position Player of the Week, MaconDawg’s "Armani Bear" nickname for Nick Saban is starting to catch on, Florida fans are back to recognizing Georgia as their No. 1 rival, up-and-coming bloggers mistakenly yet kindly are crediting me with the ability to make them famous, and I went 6-0 in last week’s S.E.C. predictions to run my season-long league record to 28-5.

The fact that I appear to be on a roll (sorry; it’s Alabama week, so ixnay on the use of "ollray" at the eblogway) offering sound prognostications with greater frequency should not instill confidence in you. You know how they say it’s always darkest before the dawn? Well, that, in reverse, applies to my forecasting skills. ("It’s always brightest before the night," maybe? No, that doesn’t work. . . .) Anyway, you heard it here first: Don’t Bet On It!

Here’s what’s going on around the Southeastern Conference this Saturday:

Western Kentucky at Kentucky: Ah, the Bluegrass State . . . the cradle of Bulldog basketball coaches. No, wait; Dennis Felton came from there, but Tubby Smith went there, after we nicknamed the Coliseum for him and everything. (Does anyone else remember "The Tub"?) O.K., so the Bluegrass State is the cradle and/or grave of Bulldog basketball coaches. In any case, though, the general rule still applies: Team X versus Team Lesser Included Segment of X yields a victory for Team X, be it Georgia over Georgia Southern, Texas over North Texas, or Kentucky over Western Kentucky. Going on the road and winning at Commonwealth Stadium ain’t happening for the Hilltoppers. The Wildcats win ugly. 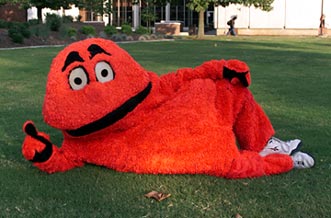 Maybe even as ugly as the Western Kentucky mascot.

U.A.B. at South Carolina: If Brian VanGorder hadn’t changed jobs rapidly even by his standards, this might have been an interesting matchup between the former Georgia defensive coordinator and a former Georgia offensive coordinator, Blazer coach Neil Callaway. It looked like Alabama-Birmingham was a program on the rise under Watson Brown around the turn of the millennium, and, even as recently as a couple of years ago, the Blazers were going on the road and putting scares into the likes of Georgia (16-13 in 2003), Tennessee (17-10 in 2005), and Oklahoma (24-17 in 2006), but U.A.B. has been in a tailspin of late. The Legion Field Lizards dipped from seven wins in 2004 to five in 2005, three in 2006, and two in 2007. Coach Callaway’s club has won one game so far this year, so the likelihood is that the Blazers have maxed out their 2008 victory tally already. Going on the road and winning at Williams-Brice Stadium ain’t happening for the Blazers. The Gamecocks win ugly.

Mississippi State at Louisiana State: The lesson of the defending Liberty Bowl champions’ reversion to the mean is what Dr. Saturday told us it would be; namely, that a turnover-fueled turnaround bereft of actual proficiency (or, you know, like, an offense, or something) is unsustainable as a paradigm for long-term success. Put another way, M.S.U. stinks on ice. Going on the road and winning at Tiger Stadium ain’t happening for the Western Division Bulldogs. The Bayou Bengals win a game that will get ugly.

Arkansas at Texas: I called this game when it was originally scheduled and nothing in either team’s subsequent performance has given me cause for reconsideration. When a team holds the ball for nearly 35 minutes and gains 19 first downs to the opposition’s 14 at home---as the Hogs did against ‘Bama last Saturday---yet still gets outgained by nearly 100 yards and loses 49-14, that team is bad. They’re not kind of bad, they’re not sort of bad, they’re really bad. They’re almost Mississippi State bad. Going on the road and winning at Texas Memorial Stadium ain’t happening for the Razorbacks. The Longhorns win a game that will get ugly. 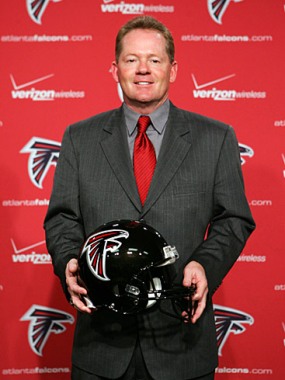 Maybe even as ugly as Bobby Petrino’s value system.

Ole Miss at Florida: Take a look at Urban Meyer’s won-lost record. Now take a look at Houston Nutt’s ledger. Watch Coach Meyer point, stare, and glower humorlessly. Then watch Coach Nutt twitch, twist, and gesticulate enthusiastically. Why does Coach Meyer seem so joyless in the midst of tremendous success while Coach Nutt seems to enjoy his job thoroughly when not being hounded by F.O.I.A. requests from rabid fans? There’s no joke coming; I’m just worried about Urb’s well-being, inasmuch as he will appear to be the less emotionally well-adjusted of the two head coaches in a game in which Houston Nutt is standing on the opposite sideline whipping about like a flagellant monk being burned by invisible fire like Ricky Bobby. Anyway, going on the road and winning at Ben Hill Griffin Stadium ain’t happening for the Rebels. The Gators win a game in which the losing coach will take greater pleasure in his job performance than his victorious counterpart. It remains to be seen just how ugly this one gets.

Tennessee at Auburn: So . . . how’re those new offensive coordinators working out for y’all? Sorry; sore subject. Except for the part about the winning coach’s evident soulless lack of enjoyment of his work, the previous prediction applies equally well to this game. Visiting team in a downcycle whose fans really miss David Cutcliffe? Check. Orange-and-blue-clad home team I hate and despise from the depths of my soul? Check. Michigan fan on hand being subjected as expected to regular repetitions of standard and understandable jests in harmlessly humorous response to his bizarre decision deliberately to wear incongruous Big Ten gear to an S.E.C. football game in order to incite precisely the reaction he received so he could grouse about it afterwards? Don’t be silly; you’d never get in-your-face behavior from a Michigan man designed to provoke Florida fans! (Also, apparently, using modern technology to play prerecorded popular music at a sporting event is deemed "evil" by some Midwesterners. Obviously, such Luddites have never seen Knowshon Rockwell Moreno crank dat Soulja Boy.) Going on the road and winning at Jordan-Hare Stadium ain’t happening for the Volunteers. The Plainsmen win a game that will make the Big Orange’s season turn ugly.

Hey . . . I think I just discovered a theme! Hmm . . . I don’t foresee any S.E.C. games this weekend in which the road team wins. I wonder how that will affect my call on this Saturday’s showdown in Athens? Oh, well, we’ll just have to wait and see, won’t we? Anyway, those are my picks, which are almost certain to be wrong, so, as always, whatever you do . . . Don’t Bet On It!