The closer we get to the first Tuesday after the first Monday in November, the worse I feel about the whole notion of voting. If you’re one of those folks who will carry some enthusiasm with you to the polling place and support a specific presidential candidate with gusto, I admire you for it, but, for me, this will be the sixth straight grit-your-teeth-hold-your-nose-and-pull-the-lever selection of presidential electors since my 18th birthday, and that distaste for our national politics undoubtedly has colored my other exercises of the franchise, as well.

For instance, I cast my latest BlogPoll ballot, but I was thoroughly unhappy with the top 25 I compiled---so much so that I was talked into changing it slightly---and now the time has arrived for me to run down the rankings in the Southeastern Conference, as well. Although I feel I am on somewhat sounder ground where the S.E.C. is concerned, there still may be some room for improvement in this list:

2. Louisiana State: We found out Saturday that the Bayou Bengals have a quarterback and we found out last year that they have a coach. Those were the only question marks concerning a supremely talented team that just showed guts and poise while winning on the Plains, which is a tough place for opposing teams to play. Granted, Georgia is 13-9-2 all-time in Jordan-Hare Stadium, but, you know, it’s a tough place for other teams to play.

3. Florida: It’s hard to know just what to make of the Gators. They fiddled around for a quarter or three against inferior competition in their first couple of games and they appear to have dominated the Vols thoroughly in Knoxville. What, precisely, are we to take from Saturday’s conquest, though? The first downs were even at 16 apiece; had the Big Orange held the ball for two fewer seconds, the time of possession would have been divided equally between the two combatants; the home team outgained the visitors from Gainesville in total yards (258-243). Three Tennessee turnovers and a 78-yard punt return allowed this one to get altogether out of hand, but how good are the Gators? Considering that they converted over 60 per cent of their third downs against U.T., I’m going to err on the side of saying they’re pretty good.

4. Alabama: The foregoing question applies equally well to ‘Bama and, once again, I’m pretty sure the Crimson Tide are pretty good, notwithstanding a less than impressive effort against Tulane. Certainly, Nick Saban’s club beat Western Kentucky in the anticipated manner and the Red Elephants’ 4-0 start has been bookended by victories over Clemson and Arkansas, both by convincing margins and neither in games taking place in Tuscaloosa. Four Razorback interceptions in a game in which the Hogs picked up 19 first downs to Alabama’s 15 skewed the numbers somewhat, but the Tide gained 328 rushing yards while allowing only 92. Even against a sad sack program that has fallen as low as Arkansas, that counts for something. We’ll find out Saturday just how much.

5. Vanderbilt: Yes, I know Senator Blutarsky is right that the Commodores’ present success is unsustainable, as anyone who has looked at Vandy’s stats and Vandy’s schedule cannot help but realize. Nevertheless, the Commies are 4-0 overall, 2-0 in conference play, and have won a league game on the road. Going by what the ‘Dores have done on the field thus far, I have to give them credit for their results.

6. Auburn: The Plainsmen’s most impressive victory so far has been a loss, inasmuch as the hometown Tigers’ 14 offensive points were at least seven more than anyone expected Auburn to score against L.S.U.’s defense. Saturday’s setback showed that Tommy Tuberville’s troops are headed in the right direction.

7. Kentucky: Here begins the roll call of the have nots. The Wildcats’ narrow escape against Middle Tennessee was not impressive, but U.K. is unbeaten and shows occasional flashes of something akin to defense.

8. South Carolina: The Gamecocks got back to .500 with an uninspiring performance against Wofford, but their win over N.C. State and their close loss to the ‘Dawgs both look a little better than they did a week ago.

9. Ole Miss: At the moment, the Rebels appear to be the Western Division’s South Carolina. 2-2 record? Check. Season-opening victory over a team that used to be good followed by a subsequent win over a Division I-AA opponent? Check. Close losses to a conference frontrunner and to Vanderbilt? Check. Colorful head coach who enjoyed his greatest success at a rival school in the same division? Check. Scenic campus, respectable tradition of winning, and pretty co-eds? Hey, nobody said the analogy was perfect.

10. Tennessee: How bad is that U.C.L.A. loss looking right about now? If the Volunteers don’t get it turned around in a hurry, they might not win a road game all year. 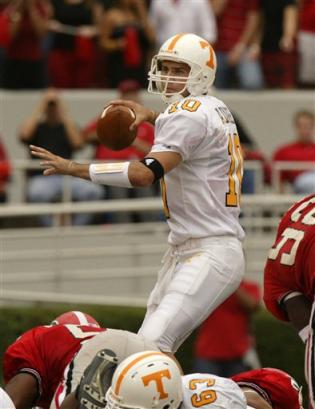 I sure hope so, anyway.

11. Arkansas: The Hogs are so heinous, they might win only one more game the rest of the season.

12. Mississippi State: This is the one more game the Razorbacks might win.

That, at least, is how it looks from here. As always, your mileage may vary, so your feedback is welcome and, on occasion, even heeded.