The eagerly anticipated day is here! The ‘Dawgs are in the desert, 43 years of regional confinement are about to be at an end, and this is your game day open comment thread, into which you are welcomed to share your thoughts, reflections, and reactions to the action in Tempe and around the nation.

This is also the occasion for naming this week’s Dawg Sports honorary game day captain. This week’s nod goes to two-time consensus all-American Terry Hoage, who lettered with the Bulldogs for four years from 1980 to 1983, serving on teams that compiled a combined record of 43-4-1 that included a national championship, three S.E.C. titles, and appearances in three Sugar Bowls and a Cotton Bowl.

In his senior season in 1983, Hoage was selected to eight different all-America teams, including the Walter Camp, Sporting News, and U.P.I. squads. In the first outing of the decorated rover’s final campaign between the hedges, the Red and Black claimed victory over a Pac-10 opponent in a night game. Here’s hoping history repeats itself tonight. 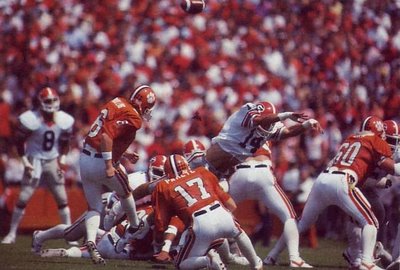 (Photograph from Dawgbone.net’s Old School Pics of the Week.)

This is your opportunity to take part in the conversation and let everyone know what you think about what promises to be an historic night in Georgia football history.