Every week, when picking conference and national outings of note, I issue the same warning without fail. I’m bad at forecasting football contests, you see, so I wouldn’t want you to mistake me for a pundit, an expert, or, really, even a guy who has the foggiest idea what on earth he’s doing. Consequently, the admonition remains unchanged: Don’t Bet On It!

The reason I repeat that mantra without fail was underscored by my S.E.C. predictions last week. Oh, all right, so I went 7-0, but, honestly, how close was Middle Tennessee really going to come to upsetting Kentucky? O.K., bad example. Let me put it another way . . . how much chance did Mississippi State have of upending Auburn? Hang on, give me a minute . . . all right, I’ve got it . . . was there any possibility South Carolina could . . . oh, nevermind!

Anyway, last week’s prognostications improved my season-long Southeastern Conference ledger to 22-5, which means I am bound for a fall. Each of this week’s games will be played on Saturday, September 20. Here goes nothing:

Wofford at South Carolina: Did you know that Mark Richt was 3-2 in head-to-head meetings with Steve Spurrier? I just thought I’d mention that. In the wake of another frustrating near-miss against Georgia for the Evil Genius, headsets have been tossed, visors have been thrown, epic poems have been penned, and a quarterback or two undoubtedly has been benched, so what’s an Ol’ Ball Coach to do? At this point, all Steve Superior can do is tear out his hair and kick his dog, and in the course of the latter temper tantrum he is apt to find a solution. If Darth Visor cannot quite get his Big Chickens kicking Bulldog tail, the next best bet would be to tap-dance on some Terriers. Wofford will do nicely for a Gamecock squad in need of a willing victim. Not that anyone’s keeping track or anything, but, for the record, Steve Spurrier is 35-38 in his last 73 games as a head coach.

Alabama at Arkansas: I just checked the forecast for Fayetteville and, evidently, they’re expecting partly cloudy skies, 67 per cent humidity, and a 74 per cent chance of one or the other of the two coaches accepting an N.F.L. job between the opening kickoff and the postgame handshake. As for the game itself, the Razorbacks are from the Natural State, where life is solitary, poor, nasty, brutish, and short. The Hogs won’t last long before being washed over by the Tide.

Mississippi State at Georgia Tech: Is it just me, or does this game have 13-8 written all over it? (The eight, by the way, doesn’t represent a touchdown and a two-point conversion; rather, it represents four safeties.) Sylvester Croom’s club isn’t exactly a band of road warriors, what with Mississippi State having lost four of its last five away games, but, beelieve it or not, this is one time when the S.E.C. West squad will be traveling to play a B.C.S. conference opponent in a stadium smaller than the one in Starkville. (Davis Wade Stadium has a capacity of 55,082. Bobby Dodd Stadium at historic Grant Field has a capacity of 55,000.) The Yellow Jackets host Gardner-Webb on October 11, so this will be the first of the Ramblin’ Wreck’s three opportunities to beat the Bulldogs. I think Georgia Tech will go 2-1 against teams with that nickname.

Vanderbilt at Ole Miss: Although I doubt whether either squad considers the other a rival per se, this series has developed into one of the most competitive inter-divisional clashes in the S.E.C. The last nine showdowns between the Commodores and the Rebels have been decided by margins of three, five, eleven, seven, three, three, eight, seven, and 14 points, respectively. With both squads on the upswing, this should be an entertaining matchup as Vandy goes for the win that will set up the ‘Dores for the 6-2 start that has the Commies bowl-eligible heading into their November 1 open date. (Don’t even think about what Vanderbilt’s November slate looks like, because you don’t want to know.) Typically, when naval officers go on the road to tangle with Mississippians who lack respect for authority, the result is a win for the visitors after a hard-fought battle. That’s the way it was with the siege of Vicksburg, and it’s the way it will be when the Commodores defeat the Rebels. 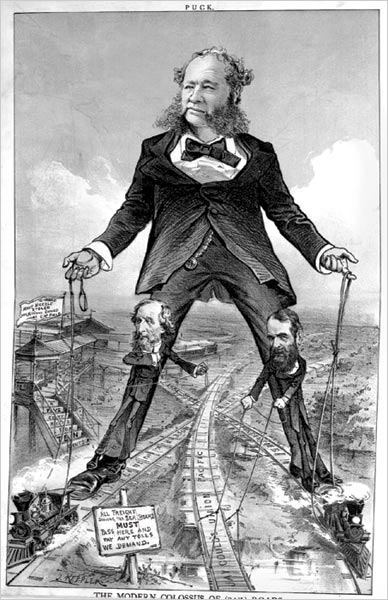 Vanderbilt bestrides the S.E.C. like a Colossus. (Cartoon from The New York Times.)

Florida at Tennessee: It’s Knoxville’s turn to host the annual battle to settle second place in the S.E.C. East! (I kid, I kid, except not really.) As battles of offensive masterminds go, this is no great shakes. Dave Clawson’s philosophy may be summed up as follows: "I have Arian Foster, who will finish his career as the all-time leading rusher at a school that has produced some pretty impressive running backs, so why don’t I throw the ball 40 times a game and see how that works?" Dan Mullen’s philosophy may be summed up as follows: "Attaway to play, Timmy." Yeah, I’m thinking the latter approach would be the way to go, even if the Volunteers’ new offensive coordinator didn’t phonetically share the same surname with a couple of guys well known for taking Tennessee down the tubes. The Gators win big.

Louisiana State at Auburn: I’m going with the Tigers. (Ah, the classics. . . .) Home field advantage usually makes the difference in this one, but, as I noted last night, the Plainsmen no longer are able to count on the sort of offensive explosion that netted the War Eagle a gaudy seven points in L.S.U.’s last visit to the allegedly Loveliest Village. While the Bayou Bengals have yet to be tested by a defense as stout as Auburn’s, the visitors do not appear so easily containable that the home team will be able to pull off the upset. I like Louisiana State in this game and I hate Auburn all the time.