It is time once again for the S.E.C. Power Poll, which, despite its name, tracks along with my BlogPoll ballot as far as it goes. Here is how I rank the twelve teams that comprise the Southeastern Conference:

1. Georgia: There are those who took one look at the Bulldogs’ tussle with the Gamecocks and drew the conclusion that "that was no national championship caliber team on the field on Saturday." Wiser and more knowledgeable commentators who possess a greater familiarity with the Georgia-South Carolina series know better: "I still think Georgia will be No. 1 at the end of the season; they just aren’t there yet." That is the measured assessment of someone who remembers that the Classic City Canines’ 13-10 victory over the Palmetto State Poultry in 1980 did nothing to prevent the ‘Dawgs from winning it all.

2. Florida: The gap separating the first, second, and third teams in this lineup is exceedingly small, but the Bulldogs got the nod because their trip to Columbia gave them the opportunity to prove it on the field against a rival. The Gators will get their first opportunity to make a real statement in Knoxville on Saturday, but, with Florida’s defense playing better than expected and the Saurians’ offense playing less well than last year yet still quite well enough, there’s every reason to believe Urban Meyer’s squad will live up to its billing.

3. Louisiana State: The Bayou Bengals are in the same boat as the Gators: loaded, lurking, and ready to show what they’re made of on the road against a team in their own weight class. L.S.U. suffered a 7-3 setback on the Plains two years ago, but, after last weekend’s snoozer in Starkville, it is doubtful whether the home team will be able to manage another seven-point offensive outburst. The defending national champions are poised to pounce and put the world on notice that they’re not giving up the crystal football without a fight. 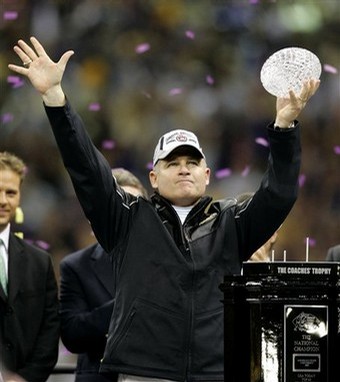 I dare you to try and snatch it out of that man’s hand. (Photograph by Chuck Burton/Associated Press.)

4. Alabama: The Clemson win took on a little extra luster this weekend and the Tide took care of business against a rent-a-win opponent. ‘Bama isn’t spectacular, but Nick Saban’s squad is solid. However, the Red Elephants’ signal caller needs to pick a name and stick with it. "John Wilson" would be fine or "Parker Wilson" would be fine, but you only get to use all three of your names if all three of them are cool (e.g., Knowshon Rockwell Moreno) or if you’ve been arrested for a heinous crime against a public figure.

5. Vanderbilt: The Commodores are tied for first place in the Eastern Division and they’re halfway to bowl eligibility. No, really, I doubled-checked that before I published it and everything.

6. Auburn: There’s something to be said for failing to score a touchdown in a conference game on the road yet still winning. All right, hang on, no, there isn’t, is there? Well, I still think the Plainsmen are pretty decent, but they’re doing their darnedest to prove me wrong. 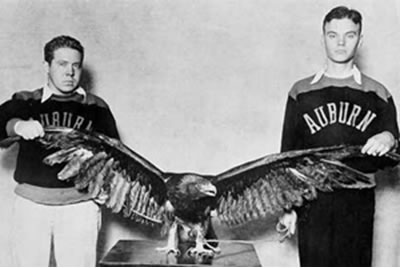 7. South Carolina: Don’t let that won-lost record fool you. The Gamecocks are a gritty team, they field a speedy and stout defense, and their offense is getting better. The Palmetto State Poultry may be in a tailspin as far as their ledger is concerned, but the quality of their play is on the upswing. Yes, believe it or not, you can lose several straight S.E.C. East games and still be a big, powerful team. The ‘Cocks will not go 0-3 against the Gators, the Vols, and the Tigers.

8. Tennessee: Yes, I believe the Volunteers will finish significantly higher than eighth in the S.E.C., but, right now, their only positive is a win over a U.A.B. team with whom they monkeyed around for a couple of quarters . . . and that loss to U.C.L.A. ain’t looking as good as it did on Labor Day night.

9. Mississippi: The Rebels have beaten the teams they should have beaten and come closer than expected to upsetting a team from a major conference the A.C.C. on the road. It ain’t much, and I don’t expect it to hold up, but it’s better than nothing. 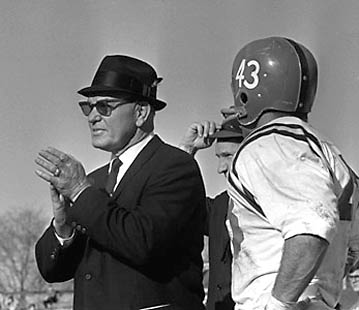 I did a Google image search for "Ole Miss football success" and all of the pictures came back black and white. Sad.

10. Kentucky: Is U.K. football good or bad? Are you kidding me? Even in the game in which the Wildcats looked good, they didn’t look all that good while beating hapless Louisville. Just when it looked like U.K. was on the verge of reminding us that you can’t spell "Wildcat" without a "D," Kentucky goes and almost gets Bluegrass Miracled all over again . . . by Middle Tennessee State. Dudes, what are you, Maryland?

11. Mississippi State: Oftentimes, S.E.C. games are low-scoring because of good defense; Saturday afternoon’s outing in Columbia is a good example. Sometimes, S.E.C. games are low-scoring because of lousy offense; Saturday afternoon’s outing in Starkville is a good example. When you hold the opposition to three points at home, you ought to win a football game. Last year’s M.S.U. defense was mean; this year’s Western Division Bulldogs are reverting to the mean.

12. Arkansas: The Razorbacks needed fourth-quarter comebacks to avoid losing to the weak sisters on their schedule. Had the weather permitted the Hogs to keep their scheduled date with Texas last Saturday, Arkansas might have been ranked 14th in the league, behind former members Georgia Tech and Tulane.

As with my BlogPoll ballot, you should feel free to rip into those rankings to the degree you deem appropriate. Have at it.