I am in no way happy with this week’s BlogPoll ballot. As I promised I would last week, I started with a clean white sheet of paper and the result was a mismatched hodgepodge of a top 25.

It is still early enough that unmitigated resume ranking would produce anomalous results, yet we now have enough information about most of these teams not to be ordering teams based upon sheer guesswork. Using that unsatisfactory hash combining fish with fowl and operating without the benefit of having examined any other person’s or group’s college football rankings, I came up with the following, with respect to which your constructive criticisms are sought:

While the Virginia win has lost much of its luster, it still represented a season-opening cross-country trek to face a B.C.S. conference opponent coming off of a successful campaign. The main reason Southern California is ranked No. 1, of course, is that the Trojans took care of business in emphatic fashion against Ohio State.

You could make a decent case for ranking my second- through sixth-place teams in any sequence, but I went with Oklahoma at No. 2 because the Sooners have put away their first three opponents by margins of 57-2, 52-26, and 55-14. I have my misgivings about this ranking, however, because Bob Stoops’s troops posted those marks against a Division I-AA opponent, a Cincinnati squad whose quality is presumed but not yet proven, and an atrocious Washington club that now stands at 0-3.

The gap between Oklahoma at No. 2 and Georgia at No. 3 was narrow. The Sooners handled their season-opening Division I-AA opponent more readily than the Bulldogs dealt with Georgia Southern, although the 21 points the Eagles scored largely were cosmetic touchdowns tallied against the third and fourth string. The Red and Black’s win over Central Michigan was similar to the Crimson and Cream’s victory over the Bearcats, but Cincy is a B.C.S. conference team and likely is superior to the Chippewas. Finally, while South Carolina is a significantly better team than the Huskies, Georgia’s game in Columbia was much, much closer than Oklahoma’s outing in Seattle. Yeah, I’m not really satisfied with that explanation, either.

There’s no question that No. 4 Missouri looks stout, but against whom? The Tigers handed a 52-42 setback to an Illinois squad that beat Louisiana-Lafayette by a field goal, dropped a 52-3 drubbing on Division I-AA Southeast Missouri State, and hammered a twice-beaten Nevada club 69-17. While I believe in Mizzou, I won’t know what to make of the Tigers until they play someone. 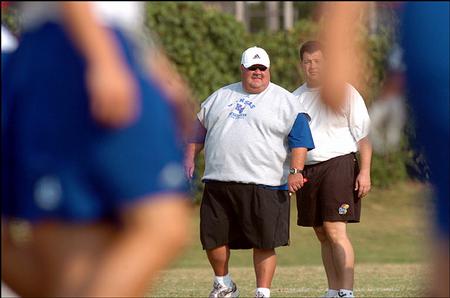 This seems to be a theme among Big 12 North teams.

My fifth-, sixth-, and seventh-ranked teams (Florida, Louisiana State, and Texas, respectively) all fell into the same category. I’m very sure the Gators, the Bayou Bengals, and the Longhorns are very good, but I don’t know how good. All three squads are 2-0, but the Saurians have played the Warriors (who just got drilled by Oregon State) and the Hurricanes (whose only other game was against a lower-division opponent), the Fighting Tigers have defeated Division I-AA Appalachian State and winless North Texas, and the ‘Horns have beaten Florida Atlantic and U.T.E.P. units with one win and four losses between them. I don’t yet have a legitimate means for differentiating between these teams.

By contrast, I’m fairly certain my eighth-, ninth-, and tenth-ranked teams (East Carolina, Brigham Young, and South Florida, respectively) are vastly overrated, but their respective achievements ostensibly are too meaningful to ignore. All three of these squads are 3-0, with the Pirates taking pride of place by virtue of wins over Virginia Tech and West Virginia, despite E.C.U.’s struggle with Tulane.

The Cougars didn’t do themselves many favors with victories over Division I-AA Northern Iowa or winless Washington, but B.Y.U.’s poleaxing of previously high-flying U.C.L.A. had to be recognized. The same held true, to a lesser extent, for the Bulls’ victory over Kansas.

No. 11 Wisconsin, No. 12 Alabama, and No. 13 Utah all attained 3-0 status by claiming wins filled mostly with empty calories, but the Badgers went on the road and beat Fresno State, the Crimson Tide traveled to a neutral site and outclassed Clemson, and the Utes earned no points for piledriving hapless Utah State, but a win at Michigan still theoretically counts for something and Utah’s 45-21 victory over U.N.L.V. suddenly looks a whole lot better than it did on Saturday morning. 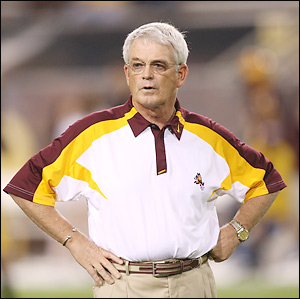 Dude, I get that y’all were looking ahead, but what was that? (Photograph by Nick Doan/Icon SMI.)

I placed Penn State as low as 14th because the Nittany Lions have produced big wins against absolute nobodies. As impressive as it may have been for P.S.U. to have won its first three games by final margins of 66-10, 45-14, and 55-13, the fact is that the Lions beat Division I-AA Coastal Carolina, one-win Oregon State, and thrice-thrashed Syracuse. No. 15 Oregon compiled a similar resume, beating by a combined 110-34 two teams (Washington and Utah State) who are 0-6 between them but needing overtime to outlast a middle-of-the-pack Purdue team on the road. (By the way, Dave, your apology is accepted but unnecessary.)

It is, I am sure, small solace to the Buckeyes that they are the highest-ranked once-beaten team on my ballot at No. 16, but, when you get past the embarrassment in Los Angeles, what does O.S.U. have to show for its season so far? How much credit should I assign to a win over Division I-AA Youngstown State and a close call against winless Ohio (Ohio)? Call it a Buckeye backlash if you must, but, so far, there’s very little there there.

The Jayhawks captured the 17th spot by virtue of a "quality loss" to U.S.F. in a tight game on the road against a solid squad and an impressive victory over a Louisiana Tech team that played well in a victory against Mississippi State. The Mountaineers made the top 18 more on track record than on performance, since West Virginia demonstrated little by beating Division I-AA Villanova and the ‘Eers were whipped soundly by East Carolina.

The lack of worthy teams is attested to by the fact that the final two spots in my top 20 went to Wake Forest (for the Demon Deacons’ wins over two B.C.S. conference teams who may not be quite as bad as we thought, though probably they are) and Nebraska (for the relative ease with which the Cornhuskers have handled opponents they should have handled with relative ease). 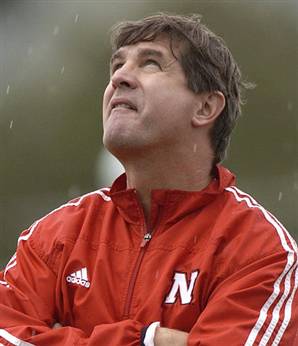 That qualifies as a novel approach for Nebraska these days.

No. 21 Arizona State and No. 25 Clemson got in because I believe they are better than their records (and, in the Sun Devils’ case, because I know from yesterday’s game in Williams-Brice Stadium that a team can lose a contest while looking ahead to Georgia yet still play the Bulldogs tough).

No. 22 Vanderbilt and No. 23 North Carolina got in because they have the records they have, although I have my doubts about the Commodores’ and the Tar Heels’ staying power. Still, Vandy’s wins over Miami (Ohio), South Carolina, and Rice count for something, as does U.N.C.’s beatdown of Rutgers in the Garden State.

Finally, Auburn made the grade at No. 24 because the Plainsmen are 3-0 and I believe they will be good, but egad! Never quite delivering the knockout blow to Southern Miss is one thing, but something is really wrong when the Tigers beat Mississippi State and the Braves beat the Mets by the same score (3-2) on the same day.

Because I started from scratch, I gave varying degrees of consideration to numerous teams who did not quite pass muster, including Air Force, Boise State, California, Connecticut, Georgia Tech, Iowa, Maryland, Oklahoma State, Texas Christian, Texas Tech, and Virginia Tech. Each of these teams came up short by virtue of an unconvincing win and/or a weak slate, sometimes coupled with what could not be characterized as a quality loss and occasionally conjoined with the handicap of having the word "Tech" in the school’s name. For instance, if the Terrapins were serious about turning their victory over the Golden Bears into a top 25 ranking, they should have thought twice before beating Division I-AA Delaware by only a touchdown and following that up by losing to a team with this for a mascot!

En route to reaching the foregoing conclusions, I watched the North Carolina-Rutgers game on Thursday and the Kansas-South Florida game on Friday. On Saturday, I saw bits and pieces of the Tennessee-U.A.B., Clemson-N.C. State, and Cal-Maryland games before watching every single second of the Georgia-South Carolina game. After that, I watched Oregon and Purdue in overtime before capping off the evening with the Ohio State-Southern California tilt and winding down with portions of the Wisconsin-Fresno State showdown.

I don’t like that ballot, so I don’t expect you to like it, either. While I would appreciate it if you didn’t go so far as to call me dumb and dumber, you should feel free to give my top 25 what-for in the comments below, because those rankings deserve your scorn.