Game day is upon us! The Bulldogs are on the road to open S.E.C. play, I’m participating in a "pick ‘em" game (for pride, not money, and, really, not even for that much pride, since I forgot to pick last week and am therefore in last place), and it’s time for this week’s game day open comment thread.

Feel free to contribute your thoughts, reflections, reactions, and celebrations/lamentations (as warranted) in the comments below. Meanwhile, it is time to name the Dawg Sports honorary game captain for this week’s outing.

The choice, of course, was obvious. Given the fact that today’s contest is against both Steve Spurrier and South Carolina, there could be only one person: 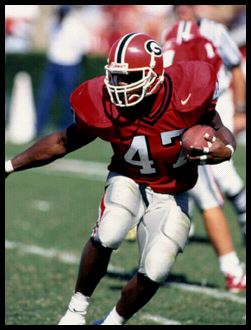 In 1995, Robert Edwards set a school record with five second-half touchdowns (four rushing and one receiving) in a season-opening 42-23 win over the Gamecocks. In 1997, the Bulldog running back racked up 124 yards and tallied four touchdowns against the Evil Genius’s Florida squad in a streak-breaking 37-17 victory in Jacksonville.

Here’s hoping the spirit of Robert Edwards is to be found in the young men wearing red helmets and silver britches in Williams-Brice Stadium this afternoon.