As you know, I do a weekly segment throughout football season known as "Too Much Information." Unfortunately, for the first few weeks, what we really have is too little information, at least as far as reliable statistical indicators go.

For instance, did you know that Georgia leads the league in scoring offense with 50.5 points per game while South Carolina ranks tenth in the S.E.C. with 25.5? Still, since the ‘Dawgs played Georgia Southern and Central Michigan rather than N.C. State and Vanderbilt, you have to think those figures are more than a little bit skewed.

So, when I assert that Saturday’s game pits the S.E.C.’s leader in total offense against its leader in total defense, I am making a true statement that has little real-world meaning. Georgia averages a league-best 543.5 yards per game (8.5 per snap), but the Red and Black most likely will not be rolling up three-tenths of a mile of total offense on the Gamecocks. South Carolina tops the conference in total defense with 181.5 yards per game allowed (3.3 per play), but the Garnet and Black very probably will not prevent the visitors from traversing the length of two football fields. 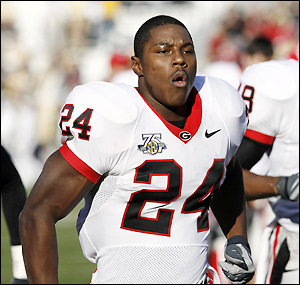 I believe this gentleman will have something to say upon that subject. (Photograph by Mike Zamilli/Getty Images.)

While I hold out hope that some statistical measures are not misleading---e.g., Georgia ranks second in the S.E.C. in rushing offense (237.5 yards per game) and South Carolina ranks tenth in the league in rushing defense (112.0 yards per game allowed)---I have my doubts whether the Gamecock quarterbacks will continue to throw interceptions at their current rate of three picks per contest.

Where, then, are we to look in order to glean reliable trends? Our best bet, perhaps, is a glance at history. While Paul Westerdawg is right that the ‘Dawgs have won in Columbia with regularity (Georgia is 16-6-2 all-time at Williams-Brice Stadium, with fully one-third of the Bulldogs’ losses there having occurred while I was sitting in the stands, which I most emphatically will not be this Saturday), the Classic City Canines have played more than their fair share of nailbiters on the Palmetto State Poultry’s home field.

Dating back to South Carolina’s 10-2 season in 1984, the Bulldogs have gone 7-4 in road games against the Gamecocks, with the seven victories being decided by margins of five, 22, three, 14, six, four, and 18 points. In other words, Georgia’s last eleven trips to Columbia have produced eight games which were either losses or wins by fewer than seven points. Even one of the Red and Black’s two victories by more than two touchdowns was a worrisome outing that didn’t feel truly out of reach until late in the game. A convincing Bulldog victory would not be unprecedented, but it would be a deviation from the historical norm. 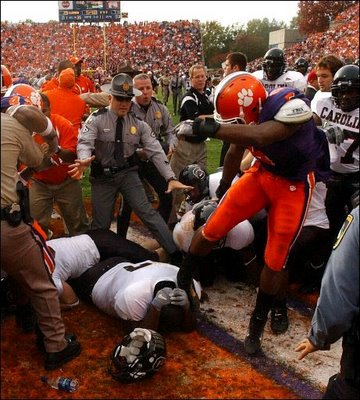 Of course, for South Carolina, not losing all the time would be a deviation from the historical norm.

Still, it’s not the margin that matters, it’s the victory, so, as long as we’re examining historical trends, let’s consider a few:


What does all of that mean? Most likely, it means nothing at all. Still, it does provide some hint of the ordinary course of business between the Bulldogs and their rivals from Columbia. The border wars pitting these two old foes against one another are hard-fought close contests . . . which the Red and Black most often win.