A Black Mark Against Mizzou: Why Last Weekend Was Even Worse Than You Think

Share All sharing options for: A Black Mark Against Mizzou: Why Last Weekend Was Even Worse Than You Think

Monday mornings always pose their challenges, but, after spending much of the weekend in a current events vacuum, I learned early yesterday that the news ranged from bad to worse to worst.

As if the genuinely sad circumstances noted above were not bad enough, we also have had to deal with silly exclamations that Georgia’s season will be a failure if the Bulldogs do not win the national championship (to which, fortunately, Richard Pittman has offered a well-reasoned rebuttal) while facing the cold hard fact that the most respected voice in the college football blogosphere has projected that Florida will finish No. 1 and the ‘Dawgs will finish No. 5.

Needless to say, I find Sunday Morning Quarterback’s dispassionate and unbiased analysis deeply disturbing, even though I disagree with his assertion that "three road games against teams ranked in the preseason polls -- at Arizona State, at LSU, at Auburn -- plus Florida at a neutral site would be an unprecedented gauntlet if UGA emerges unscathed," for reasons I made clear here:

I’m not making Joe Namath-like guarantees or randomly calling people in Ohio to insist that my team is going to beat their team in Miami or anything. I just have faith in this team.

Three points regarding the schedule:

1. The tough schedule is a double-edged sword. Its potential downside is obvious and very, very real. However, playing that many tough teams ensures the Bulldogs of ongoing media exposure, which is important to maintaining their poll position (think about L.S.U. last year), and it creates a margin for error, as an early loss isn’t necessarily fatal.

2. Someone in that gauntlet likely will turn out to be overrated. I have Arizona State, Auburn, Florida, and L.S.U. all ranked fairly high, but one of them probably won’t be as good as advertised. We just don’t know yet which one.

3. Three tough road games are a definite challenge (and, given Georgia’s struggles in Columbia, I would include South Carolina as a fourth such contest), but surviving them would be "unprecedented" only by the standards of a lesser coach. Mark Richt is 38-7 (.844) between the hedges and 25-4 (.862) on opponents’ home fields. Should we really put this task past the head coach whose road winning percentage is higher than his home winning percentage?

It was into this unceasing vortex of varying gradations of awfulness that Rock M Nation’s The Boy dropped this intriguing and lucid FanPost at Sunday Morning Quarterback, in which he went sabermetric on the S.E.C. East. (The Western Division subsequently received a similar treatment.)

The Boy’s examination was thorough and thought provoking, in addition to containing an interesting theory about teams that are better in the first and third quarters (due to game planning and halftime adjustments) and those that are better in the second and fourth quarters (due to athleticism and talent). Finally, I thought, something new that is also positive and life-affirming and . . .

What is that on that Georgia helmet?

Go look again, because I refuse to sully this site by reproducing that disgusting repugnant filthy despicable image here.

Is that a black stripe down the center of that Georgia helmet?!?!

Somebody get me a paper bag, because I swear I’m starting to hyperventilate here.

For the record, this is what a University of Georgia football helmet looks like:

The stripe down the center is white. That was the case from the time Vince Dooley redesigned the Bulldogs’ uniforms upon becoming head coach in 1964 to the time his successor, Ray Goff, was shown the door following the 1995 campaign.

Then began the Jim Donnan terror error era. The new coach added the distinctive black stripe down the center of the helmet. He then proceeded to lose three in a row to Georgia Tech and post a 4-0 record in bowl games which was attributable almost entirely to such consistent underachieving in the regular season that the ‘Dawgs invariably found themselves in a postseason berth below their ability level . . . yet they still needed second-half comebacks to win the 1998 Peach Bowl and the 2000 Outback Bowl.

Along came Mark Richt to save the program from a lengthy period of mediocrity. Long before he had coached his first game, the former Florida State offensive coordinator did many things correctly. He brought his family to the press conference announcing his hiring, at which his wife and children were all attired in red and black. He hired beloved former Georgia quarterback Mike Bobo as an assistant. He retained Rodney Garner, implemented character education courses and mat drills, and let Quincy Carter and Jasper Sanks know that the days of taking it easy were done.

While he was at it, Mark Richt took that darned black stripe off the helmet and restored the Bulldogs’ traditional look. It didn’t take a man as devoutly religious as Coach Richt to recognize that, after a fan base that was bitterly divided over the firing of Coach Goff rapidly attained unanimity following the release of Coach Donnan, the defacing of the Georgia helmet stripe was a Peach State mark of Cain entirely deserving of being expunged.

When the Red and Black failed to win the 2000 national championship, I blamed myself; I had gone to Columbia to see the Classic City Canines play the Palmetto State Poultry in 1996, when the ‘Dawgs lost to the Gamecocks, yet still I returned to Williams-Brice Stadium four years later, when South Carolina pulled off what then appeared to be (but, in reality, turned out not to be) an upset. I vowed then that I would never travel to Columbia for another away game . . . and, since my first quarter as a student in Athens, Georgia has gone 6-0 at South Carolina in games I did not attend yet 0-2 there in games for which I was present.

When the Red and Black failed to win the 2004 national championship, I blamed my wife (who had purchased the wrong kind of garbage bags; it’s a long story) until Warren St. John convinced me differently.

If Georgia fails to win the 2008 national championship, I will blame my fellow SB Nation college blogger, The Boy, for tainting the campaign with the publication of that preseason blast from the pusillanimous past. Tiger fans in the Show Me State had better hope the ‘Dawgs win it all, because there will be blame for ol’ Mizzou if the Red and Black fall short.

Just to be on the safe side, everyone in Bulldog Nation should break out the rosary beads and recite a dozen "Run, Lindsay, run!"s as penance. As for you, Boy, you have been warned. 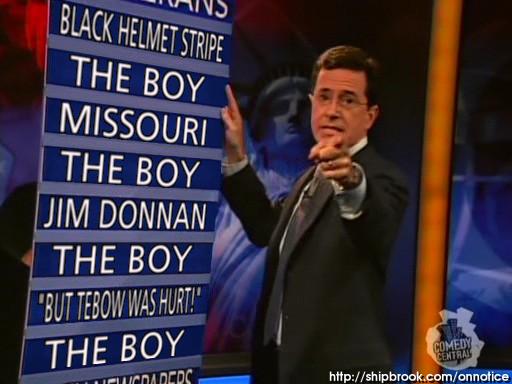