Where Will the Arizona State Game Rank Among Cross-Sectional Contests?

Share All sharing options for: Where Will the Arizona State Game Rank Among Cross-Sectional Contests?

With the start of the season only a week away, the hearts and minds of Bulldog Nation now are wholly consumed with thoughts of football, and there is no early outing to which fans more anxiously are looking forward than the September 20 tilt with Arizona State.

Fans are posting pictures of tickets and pictures of mountains just to get into the spirit of the first regular-season road game the Bulldogs are playing outside the South since 1965. Given our unfamiliarity with the region and the similarity of the symbols, we might as well be playing in Tibet!

Because cross-sectional road trips have become a rarity for the ‘Dawgs, and because this particular nationally prominent contest has the potential to give the Red and Black’s slate a huge boost in schedule strength during a year in which Georgia will be in national title contention from the get-go, I thought this was an opportune time to place the upcoming game at Arizona State into its historical context by presenting . . .

5. Georgia 7, N.Y.U. 6 in New York City (November 8, 1930): In a game played at the Polo Grounds, the Bulldogs trailed by six when quarterback Austin Downes (who would serve as captain of Harry Mehre’s 1931 squad) connected with New York Sun all-American end Herb Maffett (who served as captain of the 1930 team) for the tying touchdown and all-Southern Conference end Vernon "Catfish" Smith (who would be named to three all-American teams the following year) kicked the game-winning extra point to beat the Violets. (One of the local Gotham papers featured a headline the next day reading: "Catfish Smith beats NYU 7 to 6.") Smith had scored every point in Georgia’s 15-0 victory over Yale in the dedicatory game played in Sanford Stadium the year before. Less than a month prior to their victory in New York City, the Red and Black had beaten Yale in New Haven for the second straight series victory of what would end up being a five-game winning streak over the Elis. A second triumph secured on the opposite side of the Mason-Dixon line in the same season was an enormous coup for a Southern football team in that era and the ‘Dawgs sneaked by the Violets by the same 7-6 score a year later. Also, note the date: November 8, 1930. On the 50th anniversary of this historic game, Georgia added another page to its storied history. On November 8, 1980, Buck Belue completed a 93-yard touchdown pass to Lindsay Scott and caused Larry Munson to break his chair.

4. Georgia 15, Michigan 7 in Ann Arbor (October 2, 1965): This game had to make the list, if only because it will for the next 28 days remain the most recent regular-season game played by the Bulldogs outside our native region. However, the game itself was significant for other reasons. Arguably, no Georgia club ever got off to a more impressive start than Vince Dooley’s second squad. In the autumn’s first four weeks, the Red and Black scored a controversial 18-17 win over eventual A.P. national champion Alabama on a flea flicker, beat Vanderbilt 24-10, defeated then-No. 7 Michigan on the road in a battle of top ten teams, and upended Clemson between the hedges. While the season fizzled after a seven-point loss to Florida State in a night game in Tallahassee, the opening month of the 1965 season offered a hint of what was coming, as the ‘Dawgs would go on to capture S.E.C. championships in 1966 and 1968. 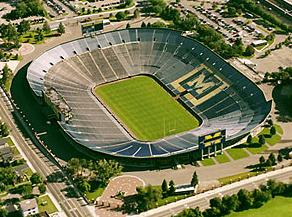 3. Harvard 10, Georgia 7 in Cambridge (October 15, 1921): Although the Red and Black (to whom the "Bulldogs" nickname had been affixed a year earlier) came up short, the game was significant because it represented Georgia’s first outing played north of Maryland. Herman Stegeman, whose coaching contacts extended throughout the country, had guided the Classic City Canines to an 8-0-1 ledger in his first season on the sidelines in 1920, which enabled the future athletic director, dean of men, and namesake of two campus buildings to arrange cross-sectional games with the Eastern powers of his day. Although many football historians attribute the respect afforded to Southern football to the Crimson Tide’s Rose Bowl victory over heavily favored Washington on January 1, 1926, Alabama’s road to Pasadena was paved by Georgia games such as this one. The Bulldogs lost but they acquitted themselves well, scoring a touchdown against a Crimson club that had shut out six straight opponents. Later that year, despite playing on two days’ rest after having competed on Thanksgiving Day, the Red and Black lost by a touchdown to a Dartmouth squad that had lost just twice in its previous 13 games.

2. Georgia 14, Yale 10 in New Haven (October 8, 1927): If the 1921 tilt with Harvard earned appreciation for Southern football by being close, the 1927 game in Connecticut opened many eyes in the East by proving that clubs from the Deep South could win outside their native land. Georgia had gone 0-4 against Yale prior to that point, losing by double-digit margins three times and being blown out by such scores as 35-7 and 40-0 on the Red and Black’s previous trips to New Haven. The Southern Bulldogs’ victory over the Ivy League Bulldogs, which became certain only when a last-minute desperation heave by the home team came to rest just outside the end zone, vaulted the Red and Black to national prominence in a season that saw the ‘Dawgs go 9-1 and finish one win short of a Rose Bowl berth. (The lone loss, by the way, was to Georgia Tech at Grant Field, and the setback so sickened the University president that he immediately began the fundraising campaign to build a first-class facility for football in Athens after having been forced to play 17 of the previous 18 series meetings with the Yellow Jackets in Atlanta. Two years later, on the eve of the Wall Street crash that probably would have delayed by a decade the construction of a new arena in the Classic City had the University president not been so motivated to act quickly, the new stadium opened. The president who took the loss to Georgia Tech so hard was, of course, Steadman Vincent Sanford.) 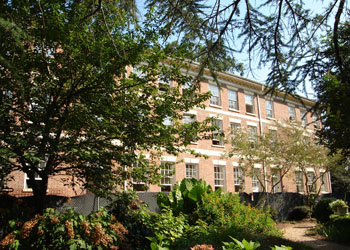 Also, they design a fine campus building at Yale!

1. Georgia 7, Fordham 7 in New York City (November 21, 1936): A tie is like kissing your sister? If so, then, for this game, the ‘Dawgs were James Haven at the 2000 Oscars. In the first year of the Associated Press college football poll, the Bulldogs again traveled to the Big Apple for a battle at the Polo Grounds. The Rams, led by the famous "Seven Blocks of Granite," were unbeaten, favored, coming off of a bye week, ranked third in the country, and the frontrunners to receive an invitation to the Rose Bowl until Georgia knocked them out of contention. Fordham spent the holidays at home (as did the ‘Dawgs, who finished 5-4-1), but S.E.C. football received a shot in the arm nationally from the deadlock, as Alabama and Louisiana State both were ranked in the top four in the final A.P. poll.

Here’s hoping we add another favorable chapter to our storied history on September 20. Let me know if there are any important cross-sectional games I missed.