If Love Means Never Having to Say You're Sorry, a National Championship Means Getting to Say "Bite Me!"

Share All sharing options for: If Love Means Never Having to Say You're Sorry, a National Championship Means Getting to Say "Bite Me!"

I have a confession to make: I really don’t care that much about the national championship.

Oh, don’t get me wrong. I want Georgia to win it. I’d certainly rather have Georgia win it than anyone else, just as I would rather have the Bulldogs win anything positive than have someone else win it instead.

Although I don’t buy the notion that a national championship is "mythical" (because it is determined by a long-established practice which has, at worst, the tacit approval of the N.C.A.A., which sanctions the bowl game at which the No. 1 ranking is determined and reports the results in the college football record book), I am bothered---no; more like annoyed---by the outsized significance we attach to what, ultimately, is fairly arbitrary.

No, I am not joining the chorus that calls for a playoff; I am on record (repeatedly) with my opposition to that ill-conceived idea, which would heighten the importance of an accomplishment I believe should be lessened in significance relative to other achievements. Frankly, a national championship is the Members Only jacket of college football. 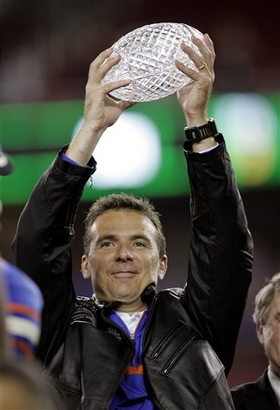 It’s a status symbol only because, and only to the extent, we consider it important. I didn’t want a Members Only jacket when I was in junior high (and Members Only jackets were popular), but, because my classmates thought they were cool, I was more or less obligated to want one.

That’s the way I feel about the national championship, which I consider of strictly secondary significance to more tangible goals. The overemphasis placed upon a No. 1 ranking in the postseason polls is attested to by the S.E.C. Power Poll ballots cast by my respected colleagues at A Sea of Blue and Rocky Top Talk, which employ a mechanistic formula which shows how out of whack our emphasis upon national titles truly is. (Note, for instance, the column of Joel’s chart showing each coach’s winning percentage: Mark Richt, Joel’s seventh-best coach, has the third-best winning percentage---better than Phillip Fulmer’s, Les Miles’s, Nick Saban’s, Steve Spurrier’s, and Tommy Tuberville’s---and the two guys ahead of him, Urban Meyer and Bobby Petrino, earned the lion’s share of their wins in lesser conferences.)

As I have demonstrated before, there really was no appreciable difference between Georgia’s season in 2002 and Louisiana State’s season in 2003. Both teams went 13-1, captured the S.E.C. championship, and won the Sugar Bowl. Each team’s only loss was to a Ron Zook-coached Florida club that went 8-5 overall and 6-2 in league play: L.S.U. lost to the Gators by 12 points at home and Georgia lost to the Saurians by seven points at a neutral site. Neither squad drew a bowl opponent as strong as it deserved---both, in fact, were entitled to get a shot at U.S.C.---and, while each won solidly in the Superdome, neither was as dominant on the scoreboard as it ought to have been. The same did not hold true in the Georgia Dome, however, as the Fighting Tigers won the S.E.C. championship game by a 21-point margin and the ‘Dawgs won the S.E.C. championship game by a 27-point margin.

In making these points, I do not intend to detract from the Bayou Bengals’ achievement; the 2003 L.S.U. squad was a great team that deserved every accolade it received. However, the Red and Black ought not to be penalized for the fact that the Tigers went 13-1 in a season in which there were no major unbeatens and the Bulldogs did it in an autumn in which there were two. 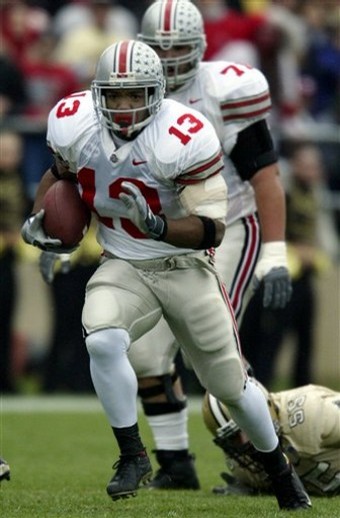 Likewise, I, like every loyal citizen of Bulldog Nation, revere the 1980 Georgia team, which won an undisputed national championship. Why, though, was that squad any more special than the 1946 Red and Black?

The ’46 squad was an offensive machine, scoring 33 or more points in eight of their eleven contests. That Georgia team dropped a 35-7 hammering on a nine-win Georgia Tech squad that won a New Year’s Day bowl game, in addition to beating a Bear Bryant-coached Kentucky club by 15 points and shutting out both Alabama and Auburn.

However, the 1946 Georgia team suffered exactly the same fate as the 1966 Alabama club. Notre Dame and Army, neither of which accepted a bowl bid, tied one another yet finished ranked first and second, respectively. The Fighting Irish were 8-0-1. The Black Knights of the Hudson were 9-0-1. The third-ranked Bulldogs were 11-0 and got jobbed. 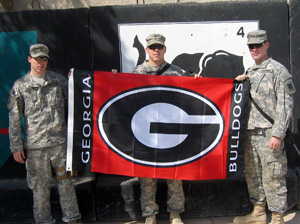 Darn that Army! Oh, um, except for that part about courageously putting themselves in harm’s way to defend bravely the values of our great nation so wussified pinheads like me can yammer on about nothing on the internet. Yeah, thanks for that part.

Nevertheless, the history books say what they say, so the 1946 team is less respected than the 1980 team, despite having posted comparable accomplishments on the field. As usual, Sunday Morning Quarterback said it best: "[T]he crystal ball is a wrecking ball of doubt, an obliterator of nuance. It carries in its finely-honed ridges the embodiment of ultimate truth, ‘bragging rights,’ and silences haters on sight. The ends rout the means. The crystal ball is carte blanche to draft any narrative you please. I guess that's what it means to be Number 1."

Why, then, do I want Georgia to win this year’s national championship? Partly, because winning it will mean that the Red and Black also won what actually matters, such as the division crown, the conference title, most if not all of the rivalry showdowns, and the bowl game.

Mostly, though, I just want one so we’ll quit hearing about not having one. Get the crystal football, hold it up, show it off, then stick the thing in a trophy case and let it gather dust while we get to tell out-of-conference haters, S.E.C. rivals, and Stewart Mandel to shut up about it already.

There is joy---much joy---to be had in beating a rival, claiming a Southeastern Conference championship, or winning a January bowl engagement. Finishing (rather than merely starting) the season ranked No. 1, though, is not a source of pleasure or even necessarily a sign of having achieved anything appreciably greater than what Georgia has accomplished consistently throughout much of the Mark Richt era.

It is merely the Members Only jacket the other seventh-graders consider essential, which we will wear once just to prove to our coevals that we have one, too . . . then, having established once and for all our credentials as one of the cool kids at whose level we have been performing for most of the last decade, we can hang that trendy fashion fad in the back of the closet and get back to the serious business of focusing on what matters.