What Will Georgia Need to Do Against Georgia Southern for Me to Feel Good About the Game?

Share All sharing options for: What Will Georgia Need to Do Against Georgia Southern for Me to Feel Good About the Game?

Now that the season-opener between the hedges is only 20 days away, a question must be asked: "What would constitute a win against Georgia Southern?"

Perhaps your immediate response is to say, "Kyle, you fool; a win would be a win, of course!" The Division I-AA status of the opponent notwithstanding, you come out of the first contest of the campaign one of two ways: 1-0 or 0-1. Undoubtedly, a Michigan man would agree wholeheartedly.

Let us assume, however, that (a) two straight seasons are not going to begin with shocking upsets by lower-division squads and (b) style points count. As you will recall, what were thought to be championship-caliber Bulldog squads kicked off the campaign against what formerly were Erk’s Eagles on two previous occasions, and neither left the Red and Black faithful feeling particularly good about the future.

The ‘Dawgs came into the 2000 season ranked tenth in the initial Associated Press poll and they began the autumn with a night game between the hedges in which they defeated G.S.U. by a 29-7 margin. The Classic City Canines’ failure to dispense with the Eagles as handily as anticipated offered an early hint that Jim Donnan’s last Georgia squad was overrated. The team finished 8-4 and ranked 20th after an O’ahu Bowl win. 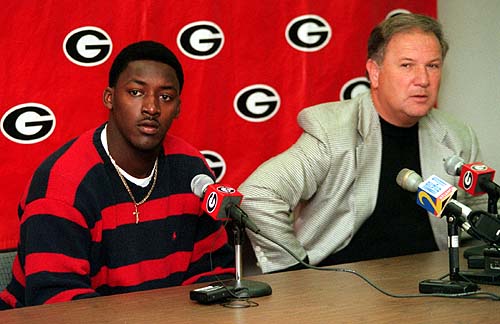 A bowl game against Virginia wasn’t exactly what we were looking for, guys.

Fastforward four years to 2004, when the two-time defending Eastern Division champion Bulldogs were pegged as the A.P.’s No. 3 team before the season started. A 20-point win over Georgia Southern to begin the fall was marred by the fact that the Bulldogs surrendered 28 points in the process. Although they ended up being the most points conceded by the Red and Black all season, the few weaknesses in Georgia’s defense were exploited by Auburn in a one-sided contest on the Plains. The final A.P. poll had the ‘Dawgs ranked No. 7.

Consequently, while I would have no trouble viewing a loss to G.S.U. as an absolute disaster, I will have a tough time regarding mere victory over the Eagles as indicative of anything positive. From where I sit, a win, all by its lonesome, will prove nothing; I will need to see four of the following five things occur before I am willing to call any victory over Georgia Southern on August 30 an encouraging sign:


Is that reasonable? Is it realistic? Am I expecting too much? Am I omitting an important indicator? What are you looking for from the season opener? Let us know what you think in the comments below.