Tonight marks the end of a busy and draining week in Georgia athletics as well as in the myriad of matters making up the rest of life, so I will hold off on expressing in detail my gratitude to the Diamond Dogs and offering the reflective response The Realist’s detailed critique of David Perno’s tenure deserves. Instead, I have the following random ruminations to offer for your consideration:

Often, I think, we start pulling for a team by proxy. I wanted Michigan to win when I was a child so my dad would be happy. When Michigan was trailing by 21 in the Water Buffalo Stampede Minnesota game, my girlfriend at the time wanted Michigan to do well so I wouldn't accidentally shove her off the couch again in rage. Now that I'm friends with the sort of Auburn fan who involuntarily screams things like "GO LESTER" on every run longer than three yards, I want Auburn to win.

I, for one, find such a sentiment indefensible and inexplicable; if you’re going to be friends with Auburn people (a questionable enough proposition all on its own), that certainly shouldn’t make you want the Plainsmen to win. However, if you’re going to root for both Auburn and Michigan, then who better to make the object of your vitriol than a man who coached at Alabama, Louisiana State, and Michigan State? It all makes sense to me now. . . .

Except for that part about wanting Auburn to win. I hate Auburn . . . and a Michigan man should, too.

I’m still inclined to take Texas’ overall talent advantage and guess there’s the usual letdown somewhere in tough games with A&M, Kansas and Oklahoma State, but the Raiders shouldn’t be satisfied with any more than three losses, or any less than the Holiday Bowl. This looks like a sure top 25 team, but until it demonstrates the leap on defense, not top fifteen. 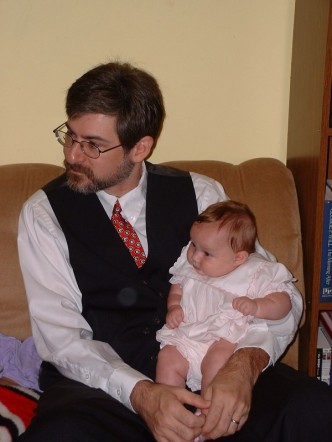 My daughter and me, preparing to participate in a religious ceremony that would have inspired Bill Hicks to shout profanity bitterly for five solid minutes before throwing in a one-liner at the end and passing it off as a stand-up routine.