Share All sharing options for: Don't Bet On It!: Bowl Edition (Part III)

2008 has been a weird year. The first six months---from the Sugar Bowl win over Hawaii to the birth of my daughter to Suzanne Yoculan’s latest gymnastics championship (I’m not suggesting those events are of comparable importance, by the way)---were great, but, starting with the second game of the College World Series finals, it’s pretty much been all downhill.

That’s why I’m grateful to Auburn for righting the ship---for the rest of us, that is---by hiring Gene Chizik. Any event that allows MaconDawg and me to mock and belittle the Plainsmen and spike our site traffic by getting mentioned on Alabama message boards in ways that don’t get either of us declared persona non grata in Tuscaloosa is a good event.

I am, therefore, full of Christmas cheer as I move into the third installment of my postseason picks with my usual warning: Don’t Bet On It!

Emerald Bowl: California v. Miami (Florida) (December 27): That Christmas cheer I mentioned? It just dissipated when I looked at the slate of bowl games I’ll be tackling this time. When the best matchup of a five-bowl stretch is being played in San Francisco, something is very, very wrong with the world in which we live, especially since this game appears interesting mostly because it’s fun to speculate how it would have gone down had the Berkeley tree-sitters tried to save the Orange Bowl from destruction. These look like a pair of programs on very different trajectories, as the Golden Bears appear to have peaked and the Hurricanes seem to be on an upward arc again. Yeah, I’m not really buying that, either, but, for now, I’ll take Miami to win, even with Cal’s home Bay Area advantage, because, really, how much could home Bay Area advantage matter? 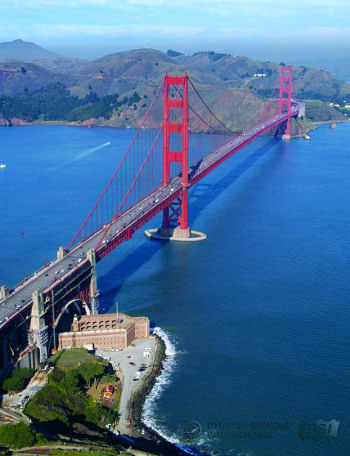 O.K. It’s a big bridge. We get it. How’s it going to help you win a football game, exactly? That’s what I thought.

Independence Bowl: Louisiana Tech v. Northern Illinois (December 28): This is just a hunch, but I’d be willing to bet that there is no merrier holiday prospect for someone from Ruston than to load the wife, the kids, the presents, the tree, and the dog into the back of the truck and go spend Christmas in Shreveport. If the Bulldogs pull off the victory in this one, the La Tech head coach, Derek Dooley, will be in an excellent position to demand a raise from the La Tech athletic director, Derek Dooley. I’m guessing this will be the game in which Coach Dooley fils declares his independence from his famous father by leading Louisiana Tech to its first bowl win since the year Elvis Presley died.

Papajohns.com Bowl: N.C. State v. Rutgers (December 29): John Schnatter can sponsor all the postseason tilts at Legion Field he likes, but I’m standing firm on how I order a pizza. I’ll call to have a pizza delivered and I’ll go on-line to read a weblog, but I’m not using the internet to get food brought to me and I’m not using my telephone to visit the blogosphere. A man has to have standards, and that’s where I’ve chosen to draw the line. Anyway, I’m still scratching my head over why Tom O’Brien chose to leave the Eagles for the Wolfpack and, despite Coach O’Brien’s 6-1 bowl ledger, I’m going with the Scarlet Knights because the State University of New Jersey has persuaded me in the second half of the season that Rutgers wasn’t just a one-man show. 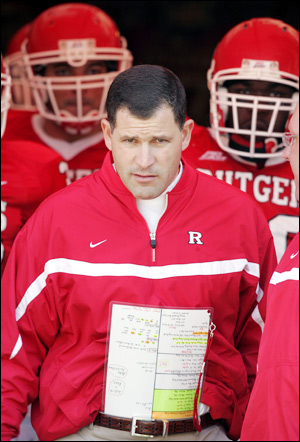 Is that a play-calling sheet in your pants or are you just happy that I predicted your team would win?

Alamo Bowl: Missouri v. Northwestern (December 29): This isn’t much of a bowl game, but at least it comes with ice cream on top! No, wait . . . oh, I get it; it’s in San Antonio, so it’s a reference to a battle our side was famous for losing. Yeah, that can’t be a good sign. There’s a part of me that thinks the Tigers’ disappointment at being there will cause them to be unfocused, but, then, how focused would a team have to be to beat the Wildcats, who haven’t won a bowl game since New Year’s Day 1949? If memory serves, the last time Northwestern found itself in this bowl game, Nebraska thumped the Mildcats 106-9. (O.K., that’s an exaggeration. It was really only 66-17.) There’ll be too much Mizzou for any team with two directions in its nomenclature to handle.

Humanitarian Bowl: Maryland v. Nevada (December 30): Ordinarily, I don’t go in for any of ESPN’s "enhanced" game coverage, like all that interactive business during the weeknight games, but this is one where I’m hoping the Worldwide Leader will go above and beyond the call of duty where special effects are concerned. Surely I’m not alone in thinking Ralph Friedgen and Chris Ault standing side by side will bear an uncanny resemblance to Jabba the Hutt and Salacious Crumb, so the next logical step is obvious: Erin Andrews in the gold bikini. You can thank me for that mental picture later, right after the Terrapins get done beating the Wolf Pack.

By golly, we’ve made it all the way to the eve of New Year’s Eve. That’s 15 bowls down and only 73 left to predict! Stay tuned for the next in my series of bowl prognostications, each and every one of which is subject to the disclaimer I often offer, and always with good reason: Don’t Bet On It!