Massanari and Poythress Are Players to Watch in '09

Share All sharing options for: Massanari and Poythress Are Players to Watch in '09

If you’re like me, and you regard the upcoming Capital One Bowl against Michigan State as representing the difference between the 2008 football season being a mitigated disaster and an absolute one, you’re already looking forward to the defending national runner-up Diamond Dogs’ opening date with Youngstown State at Foley Field on February 20.

Accordingly, a little baseball news is in order; to wit: Bryce Massanari and Rich Poythress have been named to the College Baseball Foundation’s 2009 Brooks Wallace Player of the Year watch list. Hey, it’s December; I’m doing the best I can.

Last year, Georgia’s Gordon Beckham was a finalist for the Wallace Award. 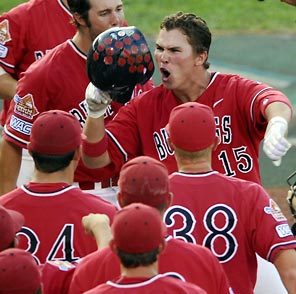 Steve Detwiler would applaud Beckham’s achievement, if only he had a thumb. (Photograph by Dave Weaver/Associated Press.)

In 2008, Poythress had the Bulldogs’ second-highest batting average (.374) and was an all-conference defensive player, earning just the second Rawlings Gold Glove ever awarded to a Red and Black player. The honor distinguished Poythress as college baseball’s top defensive first baseman.

Massanari hit .325 last year and was named to the Athens Regional all-tournament team following a 10-for-20, six-R.B.I. postseason performance. Bryce is most famous, of course, for being married to Lauren Massanari, of whom Quinton McDawg famously said: "The more shots of Lauren Massanari, the better."

Here’s hoping for a great Georgia baseball season in an odd-numbered year. Hey, it could happen . . . and, after this football season, we’re owed one, anyway.