Let’s be honest, now. This year, "S.E.C. Power Poll" is a bit of a misnomer. "S.E.C. Weakness Poll" would be more like it, complete with a countdown from worst to first, from "weakest" to "least weak team of the week." Unfortunately, I don’t have the ability to change the format of the balloting, so here are the teams of the Southeastern Conference, arrayed from best (such as it is) to worst:

1. Florida: Every time a bell rings, an angel gets its wings, and, every time a prominent Gator coach or player mists up in public, the Orange and Blue cut a swath of destruction through all in their path. If word gets out of Gainesville that Urban Meyer and Tim Tebow plan to spend Friday night watching the Lifetime Network with a box of Kleenex and a Sara Lee pound cake sitting on the table between them, you’ll know a truly epic thumping is coming in the Georgia Dome.

2. Alabama: The Crimson Tide finally took out their frustrations on someone by hauling Auburn behind the woodshed. As impressive as it was, though, ‘Bama was only approximately as dominant as Florida was against a much better team. Nevertheless, the Red Elephants are undefeated . . . and I seem to recall a Sugar Bowl at the end of the 1992 season that pitted poor old overmatched Alabama, a team that just scraped by and hadn’t beaten anyone, against an invincible squad from the Sunshine State that was going to ruin the Tide’s unbeaten season. Does anybody remember how that game turned out for Alabama? 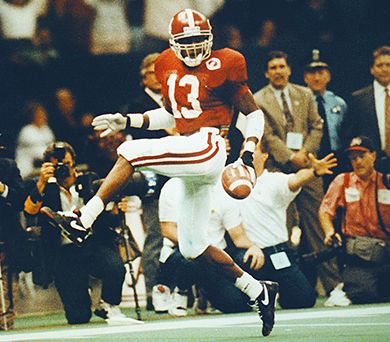 3. Ole Miss: The Rebels, who beat the Gators in Gainesville and very nearly defeated the Crimson Tide in Tuscaloosa, are the third-best team in the conference. That’s not exactly a sign of the Apocalypse, but it ain’t far off. (I hope it’s just far enough off, though, because the last thing I want is for the world to end with Georgia Tech holding a one-game winning streak over Georgia, because you know we’d be hearing about that for all eternity, to the point where, ultimately, we’d have to have a "Best of Times"-style loser-leaves-Heaven rematch between the Bulldogs and the Yellow Jackets in the afterlife. Hey, if we’re going to sing "to Hell with" each other, we might as well make it literal.)

4. Georgia: This ranking should be taken as indicative of the fact that eight S.E.C. teams are even worse than we are and should in no way be confused with a compliment to the most disappointing Red and Black club since 2000. Nothing I’ve seen this season has been on a par with the Quincy Carter five-interception game in Williams-Brice Stadium or the ignominy of an O’ahu Bowl berth, but it’s worse than anything I’ve seen in the interim.

5. Louisiana State: How does that work, exactly? If you lose your starting quarterback, you start giving up 30+ points per game to every opponent with a pulse? I guess, if your new starting quarterback was designed in a Cal Tech laboratory to be a perpetual-motion pick-six machine, it could cause some scores to get out of hand.

6. South Carolina: I think some school consolidation is in order in the Palmetto State. As distasteful as it might be to both fan bases, think of the advantages of combining Clemson and South Carolina into a single school. That way, the university could field the Gamecocks from Labor Day weekend through mid-October, then field the Tigers from mid-October through Thanksgiving. The team would never go worse than 10-2! 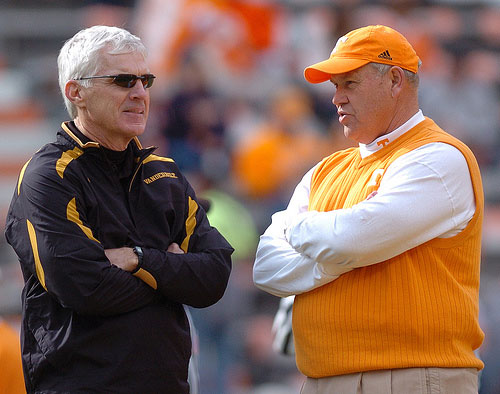 It’s possible you could duplicate that effect by combining Vanderbilt’s early season with Tennessee’s late season.

7. Vanderbilt: A quarter-century of tireless effort has allowed the Commodores to break through the glass ceiling and achieve the genuine mediocrity of which every Vandy fan has dreamt for as long as he can remember.

8. Kentucky: The Wildcat fans are going to basketball games, the rest of us are ignoring U.K. completely, Rich Brooks is pouring himself a Scotch, and Joker Phillips is counting the days. The fact that this team merely inspires utter indifference from all concerned earns Kentucky a No. 8 ranking in the league, because it’s better to be inconsequential than bad.

9. Tennessee: When the Volunteers’ rallying cry became, "Let’s go out and beat Vandy and Kentucky!" it was official that Rocky Top had hit rock bottom. The Lane Kiffin hire doesn’t impress or scare me. If you think hiring an underwhelming coach is a good idea because of who his father is, I’d like to introduce you to a fellow by the name of Mike Shula.

10. Arkansas: The win over L.S.U. was huge. Good for the Razorback players for sending Bobby Petrino out a winner in his last game before bolting for whichever job he’s taking later this month. 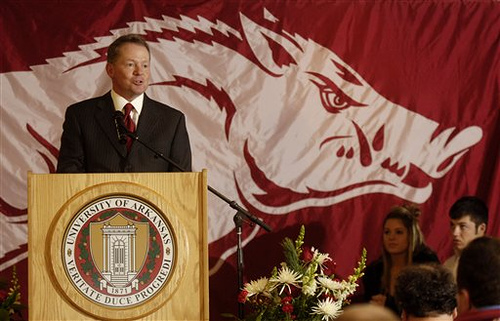 "I’m proud to be the new head coach at Tennessee Clemson Auburn! Wait . . . the Auburn job isn’t open yet? Well, that never stopped me from accepting it before!"

11. Auburn: It’s a good thing the Plainsmen lost last Saturday, because, if they hadn’t, the Yellowhammer State would have reverberated for the next year with the cry, "Fear the ring finger of the other hand!"

12. Mississippi State: Class act that he is, Sylvester Croom recognized that last season was a statistically anomalous aberration and fell on his sword like a good soldier should. Sly, you have just been self-Croomed.

That’s how it looks from here, but, then, I’m cold and mad and dejected, and that may have affected my judgment, so, by all means, let me know whether and where you take issue with any of the foregoing.