We have gone around the S.E.C., where my prognosticating skills have appeared better than they are, but last week’s national picks brought me back down to earth more than just a bit. My 1-5 record in nationwide forecasts left me stranded at 30-25 for the year, so it really ought to go without saying: Don’t Bet On It!

Here are the national games of interest, each of which will be played on Saturday, November 8, unless otherwise noted:

Cincinnati at West Virginia: The Bearcats and the Mountaineers are two of the three Big East teams currently claiming 6-2 records and the winner of this one immediately becomes the favorite to win the league. Yeah, I know, West Virginia is the name you know, but Bill Stewart is no Rich Rodriguez. Actually, these days, Rich Rodriguez is no Rich Rodriguez, either, but that’s a separate conversation. Cincy has been better than you think for longer than you think and this is the Bearcats’ opportunity to register a signature win. Coming off of a nine-day layoff, Cincinnati will be rested and ready---it’s November and the team is from Ohio, so I’m pretty sure they won’t be tanned---and this will be the time for the Bearcats to shine (assuming, of course, that Bearcats are shiny).

That was shiny cat, not smelly cat.

Georgia Tech at North Carolina: I don’t know why I torture myself by trying to pick A.C.C. games. Really, I don’t. I know the final score is going to be twentysomething to somethingteen, and I’m pretty sure that, if every A.C.C. game were to be replayed the following week, the team that lost the first time would win the second time, but, beyond that, I’ve got nothing. Since a Yellow Jacket win would seem to make the least sense here, I’m going with the visitors. Honestly, it’s either that or flip a coin . . . you know, pretty much like I did in the voting booth on Tuesday.

Ohio State at Northwestern: Don’t look now, but the Buckeyes and the Wildcats sport identical 7-2 ledgers and a Northwestern win in Evanston would give both teams 4-2 records in Big Ten play. Believe it or not, Northwestern is very nearly as good as Ohio State. O.K., that seems like a bit of a stretch, doesn’t it? Well, how about this, then: Ohio State is very nearly as bad as Northwestern. Yeah, that seems plausible, doesn’t it? I’m pretty sure the Wildcats can hang with the Buckeyes for a while, but I don’t see them pulling off the upset. Ohio State will win a game that is moderately close and thoroughly dull.

California at Southern California: Perhaps it is because Washington and Washington State are so awful---between them, the Huskies and the Cougars are 1-16 overall and 0-11 in conference play---but parity seems to reign supreme atop the Pac-10, where no teams are undefeated yet six teams have two or fewer conference losses. At the apex of the league, of course, are the Trojans, with the Golden Bears only a half-game behind in the Pac-10 standings. Is this the year Cal does what it has not done since 2003’s triple-overtime win over U.S.C. in Berkeley and beats Southern California? It seems that, the longer the national news media treat this as the defining rivalry in the league, the greater the gap grows between the Men of Troy and Jeff Tedford’s squad. I know of no reason to think this year will be any different. U.S.C. claims another conference victim. 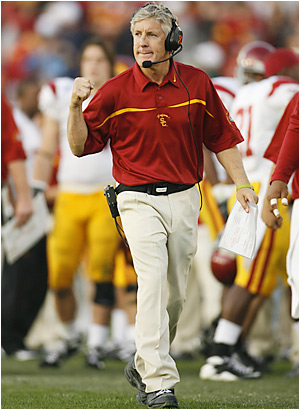 Pete Carroll is totally jazzed about my pick.

Texas Christian at Utah (Thursday, November 6): Not since B.Y.U. in the early 1980s has any program from outside the major conferences become as much of a fixture in the national college football consciousness as have the Utes. The original B.C.S. busters put themselves on the map with an undefeated season in 2004 and, while they have not remained at center stage constantly in the interim, they always have been among the favorites to provide a repeat performance, which they seem set on doing this season. Meanwhile, the Horned Frogs toil in relative obscurity. A T.C.U. program which won national championships as a Southwest Conference power many moons ago hasn’t been to anything better than a Liberty Bowl in recent memory, but the Frogs have been a constant thorn in the side of the B.C.S. big boys, notching wins over Big 12 opponents five times since the start of the 2005 campaign. The last time I believed in Texas Christian’s ability to bump off an undefeated conference competitor, the result was a beatdown of Brigham Young. I’m going with what works and picking the visitors to register the victory that makes the nation sit up, take notice, and proclaim, "How ‘bout them Frogs!"

Oklahoma State at Texas Tech: Although I tipped my hand on this one in response to Beergut’s comment, I feel a word of explanation is in order here: I am not picking an upset in this game. I believe the Red Raiders are due for a letdown---how could they not be after the biggest win in school history?---but let’s make sure to avoid any misunderstanding in this instance. Texas Tech is 9-0. Oklahoma State is 8-1. The Cowboys lost to Texas by four points in Austin when an O.S.U. Hail Mary from the U.T. 49 came up just short of producing the winning touchdown in the game’s final seconds. The Red Raiders beat Texas by six points in Lubbock when Michael Crabtree caught a pass thrown by Graham Harrell from outside the U.T. 28 and the T.T.U. receiver only barely remained in bounds in order to score the winning touchdown in the game’s final seconds. Given the venues and the closeness of the contests in question, the Pokes and the Raiders played the Longhorns pretty evenly. Both teams have destroyed every other team on their respective schedules except one; Oklahoma State won a close one over Missouri in Columbia and Texas Tech won a close one against Nebraska in Lubbock. The Tigers beat the Cornhuskers by 35 points in Lincoln. The Cowboys are going to win this game for one simple reason: Oklahoma State is the better team.

You heard it here first, folks. Of course, you also heard my usual disclaimer, reminding you not to put any trust whatsoever in my predictions, so permit me to end with a gentle reminder of a rule you must follow, no matter what the circumstances: Don’t Bet On It!