Now, let’s move along to this week’s picks. I don’t mind telling you that I owned last week’s predictions the way Georgia is about to own the Gators, going 6-0 to boost my season-long S.E.C. ledger to 52-12. Naturally, that sort of good fortune cannot last, so, please, whatever you do, when it comes to my forecasts . . . Don’t Bet On It!

Here are the games being played on Saturday, November 8, involving Southeastern Conference squads:

Tennessee-Martin at Auburn: This was smart scheduling on the Plainsmen’s part. Give Tony Franklin the better part of a year to implement his system, then line up a tune-up game before taking on your two biggest rivals. That was pretty good thinking, apart from that whole firing-your-offensive-coordinator-at-midseason thing. The Skyhawks come into this game boasting a 7-2 record and a 5-1 mark in Ohio Valley Conference play, but I’m looking for a short-lived offensive outburst from the Tigers in this glorified scrimmage. 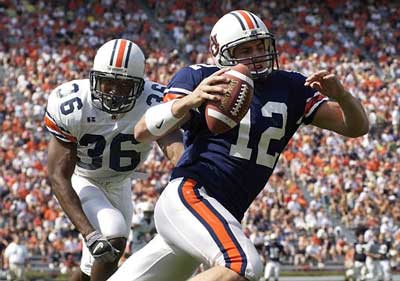 Wyoming at Tennessee: The team from the state Dick Cheney used to represent in the House takes on the team from the state Al Gore used to represent in the Senate. Are you kidding me? Al Gore buys carbon set-asides to offset his environmentally unfriendly emissions. Dick Cheney invades countries that look at him funny and shoots his buddies in the face. Why, even the mascots are mismatched: Cowboys lead cattle drives while Volunteers do community service in local soup kitchens. On the weekend after the presidential election, the red-meat red staters from Laramie take on the tree-hugging do-gooders from Knoxville. Can the Vols, bent on sending their coach out a winner and ready to take out their frustrations on a non-conference patsy, knock off Wyoming? Yes, they can.

Florida at Vanderbilt: It could happen. No, I’m not saying it’s going to happen. It’s just that it could happen. That’s all I’m saying. The Gators are sure to have an emotional letdown after their big win in Jacksonville. Urban Meyer has shown himself to be a much better coach in big games than in little ones. The Commodores are scrappy. They need the win to attain bowl eligibility. They need the win to regain some lost respect. The game is being played in Nashville. Two of the last three series meetings have been decided by single-score margins, including one in double overtime. Vandy has been bumping off the big boys with something approaching regularity in recent years. In light of all that, I’m just saying that it could happen. The problem is that it’s not going to happen, because Florida is going to win by 30 points. 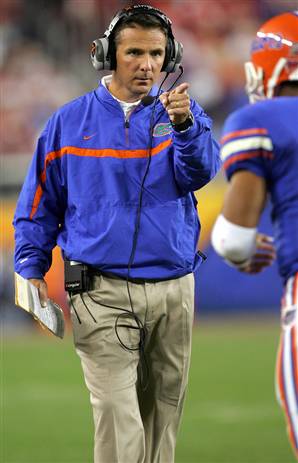 Arkansas at South Carolina: While it has not yet attained the level of being a storied rivalry, this annual clash between 1992’s S.E.C. newcomers is one of my favorite games of the year. I love the Battle of the Barnyard between the Gamecocks (a gamecock, after all, being merely a chicken) and the Razorbacks (a razorback, after all, being merely a pig); it’s like a fight scene out of Animal Farm. Both teams are coached by offensive masterminds who made names for themselves with high-flying passing attacks at other schools, and both clubs have made great strides since September, but, although all animals may be equal, some animals are more equal than others, and I believe the Gamecocks will get it done in Columbia.

Alabama at Louisiana State: You may not be aware of this, but, apparently, Nick Saban used to coach at L.S.U., and that seems to be a bit of a sore subject with some folks. Evidently, he’s in for a rude reception from the Tiger faithful when he returns to Baton Rouge, and you can certainly understand why. For one thing, Coach Saban left the program in a complete shambles after taking over a perennial power on the bayou. Wait a minute . . . actually, Coach Saban took over a Louisiana State program that hadn’t won an outright conference crown since 1986 and had posted eight losing seasons in the previous 11 years, proceeded to go 48-16 with two S.E.C. championships and a national title, and handed over a top-tier program to Les Miles after five years on the job. O.K., but they’re mad at him for doing what Houston Nutt and Tommy Tuberville did, leaving one S.E.C. West program to take over at another. Hang on, though . . . Coach Saban didn’t do that. He actually left to coach the Miami Dolphins, having previously served as an N.F.L. defensive coordinator with the Cleveland Browns. Maybe it’s the way Coach Saban’s first Crimson Tide team beat L.S.U. in Tuscaloosa last year. No, that can’t be it, either . . . the Bayou Bengals beat ‘Bama last season and Louisiana State outgained the Tide, 475 yards to 254. Exactly what is it the L.S.U. faithful don’t like about Nick Saban again? Oh, yeah . . . it’s the fact that Alabama is going to beat the Fighting Tigers on Saturday. 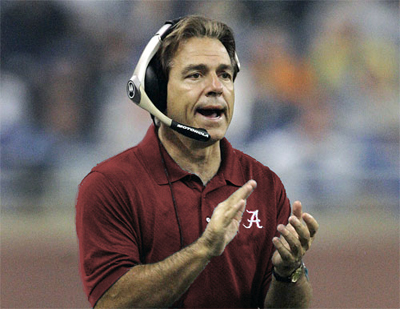 Nick Saban doesn’t have time for this pick.

Those are this week’s S.E.C. predictions, boys and girls. Just know going in that I’m wrong a lot more often than I’m right, so last week’s unblemished record most likely is a sign than I’m due for a letdown, so, by all means, please . . . Don’t Bet On It!