Yesterday, I took you around the S.E.C., so the time has come for me to provide you with the national picks for the upcoming holiday weekend. I actually went 3-1 in last week’s nationwide prognostications to improve to 40-31, but I was way wrong about the one I missed, so my usual disclaimer still very much applies. Whatever you do . . . Don’t Bet On It!

Here are this week’s national contests of note, the first of which will be played on Friday, November 28:

West Virginia at Pittsburgh: Both Big East teams sport 7-3 records. The Mountaineers are half a game out of first place in the league. The Panthers are in fourth place in the conference. Can someone remind me again why I think Pitt is having a better season than W.V.U.? There may not be a game anywhere in America involving two B.C.S. conference clubs that features two head coaches in whom I repose less faith than this chess checkers tic-tac-toe rock-paper-scissors match between Bill Stewart and Dave Wannstedt; there has not been so little sideline acumen assembled in a single stadium since Bill Curry coached alone. I’m going with West Virginia for no particularly good reason.

Maryland at Boston College: The only reason this game doesn’t represent a crucial contest in the determination of the Big East bowl pecking order is that both of these teams inexplicably find themselves in the Atlantic Coast Conference. Go figure. In a league as topsy-turvy as the A.C.C., I’m hesitant to pick the better team to win, but surely nothing in nature suggests that a Terrapin is capable of fending off an Eagle, right? 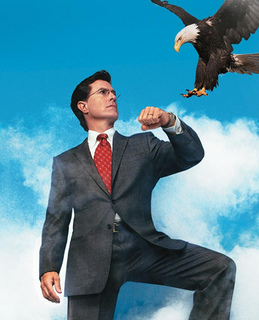 The namesake of the oldest college of the University of Georgia may have wanted our national symbol to be the bird we’ll all be eating tomorrow evening, but there’s a reason no one ever advocated making a turtle an American emblem.

Fresno State at Boise State: Remember back in the preseason when we thought this one would be worth circling on the calendar? A funny thing happened on the way to the Golden State Bulldogs’ full-fledged return to Western Athletic Conference prominence. The West Coast F.S.U. isn’t a bad team by any means, but the Broncos are the class of the league by a good-sized margin and that fact will not change this Saturday, as Boise State will improve to 12-0. Do not doubt the mojo of the blue turf.

Oregon at Oregon State: This year’s Battle of the Color-Blind Equipment Managers Battle of the Webbed Feet (sorry; "Civil War" is not a term my people use, although I’ll be happy to call it "The War Within the State") carries extra added significance, despite the fact that Jacquizz Rodgers’s shoulder injury may represent a departure from the expected script for the Beavers, who are one win away from plunging over the precipice separating the they-haven’t-been-to-the-Rose-Bowl-in-how-long? feel-good story of the college football season from the they’re-being-rematched-in-a-bowl-with-a-team-that-beat-them-how-badly-in-September? ratings-deflating disappointment of the college football postseason. Although the Ducks have matched their in-state rivals in overall record (8-3) and are but a game behind O.S. in the conference standings, Oregon’s wins have come over teams with a combined ledger of 27-62, which is why I resisted ranking the squad from Eugene for so long. Even with Rodgers sidelined, I like Oregon State to close the deal in Corvallis.

Oklahoma at Oklahoma State: Was ever there a team in a more prime position for a letdown than the Sooners in Stillwater this Saturday? The Cowboys, being the "little brothers" in this series, likely take the game more seriously than O.U. Bob Stoops’s troops are coming down off of a huge victory in Norman that has everyone talking about division crowns, poll rankings, and national championships . . . everything, in short, except for Saturday’s game. The Pokes are coming off of an open date and O.S.U. is playing at home. The problem, though, is that Coach Stoops reminded us last weekend how he got the nickname "Big Game Bob," whereas Mike Gundy’s lifetime record against Oklahoma, both as a quarterback and as a head coach, is 0-7. This weekend will make it 0-8 as the visitors register the victory, Sooner or later. 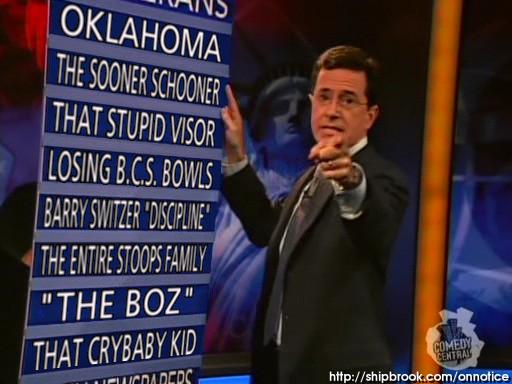 As long as we’re working a Stephen Colbert theme here, I’d like to remind everyone that Oklahoma is on notice!

I feel pretty good all right utterly uncertain about some most all of those picks, so, if I’m not sure, you clearly shouldn’t be. The lesson to be learned from my self-doubt is simple: Don’t Bet On It!