The final weekend of the regular season is upon us, so every team in the league is diving into the deep end for a final 60 minutes’ worth of action. Even with what I erroneously thought was a bold prediction that Ole Miss would beat L.S.U. (with respect to which C&F quite reasonably asked whether it was an upset if everyone saw it coming), I still only broke even in last week’s S.E.C. picks to fall to 62-16 in conference contests. At this point, I shouldn’t even have to tell you this, but, then again, no one should need a warning label anymore to know that smoking cigarettes is bad for their health, so let me reiterate: Don’t Bet On It!

These are the games on the docket for this week, the first two of which will be played on Friday, November 28, in order to make us even more thankful:

Louisiana State at Arkansas: Does anyone else remember when this game used to be a big deal? You know, like, last year? Although the Tiger faithful have concerns about the direction of their program, this is strictly a brief downcycle for an elite team; that’s a very different thing from being in the position of the Razorbacks, who are suffering the consequences of decades of mismanagement by a self-serving athletic director who hung on too long, tolerance for a climate of rabid fan animosity towards a successful coach that got out of hand even by S.E.C. standards, and the hiring of a quick-fix artist whose commitment issues would make him a fit subject for a Cosmo quiz. Add to that the fact that the Bayou Bengals are looking to end their season on a high note and have revenge on their minds, and it all adds up to an L.S.U. victory.

Mississippi State at Ole Miss: My sister-in-law and her husband are University of Mississippi alumni and we’ll be seeing them at Thanksgiving, so this is a game to which I particularly am looking forward, as it combines family, football, and Thanksgiving leftovers. Who among us doesn’t enjoy watching the Egg Bowl while eating from the deviled egg bowl? I’d pick the Rebels on general principle, but it helps that they’re good and M.S.U. is bad. 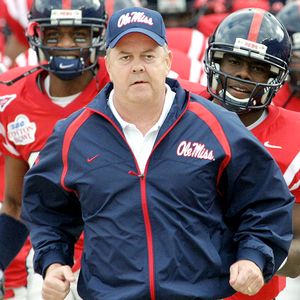 That David Cutcliffe is doing a fine job in Oxford. Oh, wait. . . .

Florida at Florida State: I’ll admit it; I had given the Seminoles up for dead, not just as a team, but as a program. It had been my belief that F.S.U. might never be good again, and certainly wouldn’t return to national prominence until Bobby Bowden ceased to stroll the sideline. The ‘Noles, however, have improved substantially. They just haven’t improved nearly enough to compete with Florida.

Vanderbilt at Wake Forest: It seems to me the math on this one is pretty simple. The Commodores beat Ole Miss by six points in Oxford. The Demon Deacons beat Ole Miss by two points in Winston-Salem. Taking home field advantage into account, Vandy ought to be about a touchdown better than Wake. Of course, my math skills weren’t good enough to get me into, say, Vanderbilt or Wake Forest, so I’m going with the Deacs to conquer the Commies.

Kentucky at Tennessee: I have an interesting exercise I would challenge you to attempt. Try to identify the latest date on which you would have looked at me funny had I said to you: "Rich Brooks will outlast Phillip Fulmer as a head coach in the Southeastern Conference." For all the disappointments this season has held in Knoxville, however, the Volunteers proved in their win over the ‘Dores that they are not done fighting for the Great Pumpkin, at least insofar as division rivals the Big Orange historically have owned are concerned. This week will be no exception, as Tennessee will send Coach Fulmer out a winner in his last game at the U.T. helm.

South Carolina at Clemson: I will confess to having a disproportionate degree of interest in this game. Because Georgia will visit Fort Hill in 2013, the Tigers’ next head coach almost certainly will be on the sideline in Memorial Stadium when Mark Richt leads the Red and Black back into Death Valley. Although Clemson football owes its genesis to Auburn through such figures as Walter Riggs and John Heisman, it is to the other half of the Iron Bowl that the Country Gentlemen have been beholden in their modern incarnation: Jess Neely and Tommy Bowden both served as assistant coaches at Alabama; Frank Howard and Hootie Ingram both played for the Crimson Tide; Charley Pell and Danny Ford each played and coached for Bear Bryant in Tuscaloosa. That is why I hope Ron Morris is right that Dabo Swinney will be the next head football coach of the Clemson Tigers. Coach Swinney walked on at ‘Bama as a wide receiver in 1990, was a scholarship player for the Tide from 1990 to 1992, made academic all-S.E.C. and earned two degrees from the University of Alabama, served as a graduate assistant at his alma mater from 1993 to 1995, and coached wide receivers and tight ends for the Red Elephants from 1996 to 2000. As an Alabama guy, he’s just a natural fit for a program at which six of the nine coaches to have served since 1931 have had ties to the Tide. Because I’m rooting for the symmetry that Coach Swinney’s hiring would bring, I’m picking Clemson to win by the shores of Lake Hartwell against the Palmetto State Poultry. 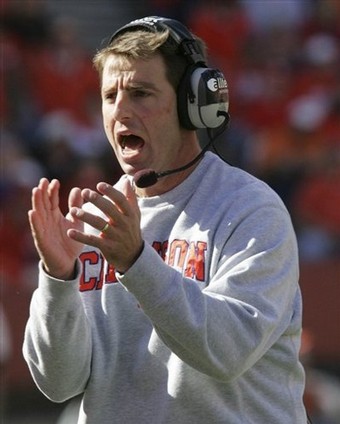 I will, however, concede the possibility that I may just like my team’s chances against a longstanding rival if that opponent is coached by someone who looks like Jack from "Will and Grace." (Associated Press photograph by Mary Ann Chastain.)

Auburn at Alabama: Don’t think this one won’t be close. Every last one of the Plainsmen’s S.E.C. outings this autumn has been a tight ballgame. The Red Elephants are winning ugly without really overpowering anyone. Auburn has had the psychological edge in this series for the last several years and the Tigers may be battling to save their head coach’s job. Auburn will give the Tide faithful more than their fair share of nervous moments. In the end, though, ‘Bama isn’t about to have its perfect season ruined by its fiercest rival. Naturally, I’ll be rooting for the Crimson Tide, because anybody who hates Auburn is all right by me.

Those are this weekend’s S.E.C. picks, for whatever limited value they may have. While I hope they kept you at least somewhat entertained, and maybe even made you a little bit better informed, I must emphasize---and I cannot stress this strongly enough---that, whatever transpires, you must remember this one thing: Don’t Bet On It!