Because the ‘Dawgs are idle this Saturday (and, thus, there is no need for me to prepare an installment of Too Much Information), I have been able to take a more leisurely approach to this week’s posting schedule. For instance, I didn’t take you around the S.E.C. until Thursday morning, which means I didn’t get to the national games of interest before now. Had I done this earlier, though, I, uh, would have called Wednesday’s Ball State-Central Michigan showdown and Thursday’s Georgia Tech-Miami (Florida) matchup correctly. Really, I promise I would have.

The credibility of the preceding claim may or may not be bolstered by my 4-2 ledger in last week’s national picks, which improved my season-long record in non-S.E.C. predictions to a middling 37-30. Surely it goes without saying that such a prognosticating resume offers all the incentive you would ever need for following my regular recommendation: Don’t Bet On It! 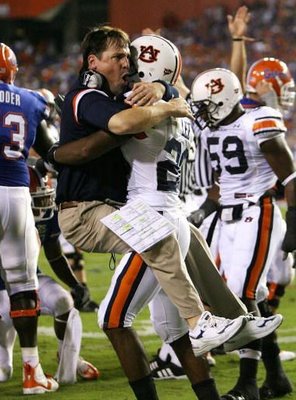 Will Muschamp proving to be the finest hire of the 2008-’09 coaching carousel? You can bet on that!

Pittsburgh at Cincinnati: This game presents a lot of unanswered questions. Will Brian Kelly’s apparent candidacy to take over at Tennessee distract the Bearcats? Is Dave Wannstedt really on the verge of leading the Panthers to a conference crown? Is this game being played in 2008 or in 2001? Before the season started, I voiced my doubts about Pitt and heeded the apparent wisdom of my brother-in-law, who advised me: "Every time someone ranks Pitt in their top 25, an angel loses its wings." The Mid-American Conference refugee ‘Cats, on the other hand, seem like the odd men out in a Big East otherwise made up of disappointments (Louisville, Rutgers, South Florida, and West Virginia), flukes (Connecticut and Pitt), and disasters (Syracuse). Cincinnati, by contrast, actually seems like a solid program, which is why I’m going with the Bearcats to keep their heads about them while the Panthers inevitably implode.

Brigham Young at Utah: I don’t know whether this year’s edition of the Holy War will be the best game money can buy, but there’s a good chance it will be the best game you won’t get to see. I don’t know that this is such a terrible thing, though, because the Utes clearly appear to be by far the best of the non-B.C.S. conference teams and the Cougars look like the most overrated of the potentially rankable mid-majors. I like Utah to take care of business at home in a game that won’t be particularly close. 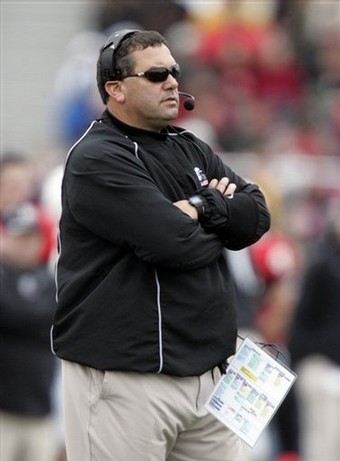 When I note that B.Y.U. is the most overrated of the possibly top 25-worthy squads from outside the longstanding power conferences, I am even including the Hawaii Warriors of the Midwest, the Ball State Cardinals, who have played no one but at least have gone undefeated. (Associated Press photograph by Michael Conroy.)

Michigan State at Penn State: I have to give the Spartans credit; I keep waiting for them to collapse, and they haven’t done it yet. It would be more than a bit of a stretch to claim that a loss to the Nittany Lions in Happy Valley followed by a loss to, oh, say, Georgia in the Capital One Bowl would constitute a late-season fade, but, just the same, let’s give it a shot, shall we? Michigan State gets some semblance of a downturn underway with a loss to Penn State; we’ll see how the rest of it plays out come January 1.

Texas Tech at Oklahoma: I know it’s sacrilege for an active participant in the college football blogosphere to say so, but I don’t particularly care for Mike Leach. I respect him as a coach, and I have no basis for disliking the man personally, but he strikes me as being like those guys in high school who tried to be weird strictly for the sake of being able to brag about how weird they were. That’s the hit I get off of Coach Leach’s public fixation with pirates and his purposeful quirkiness. I don’t mind those attributes in a sportscaster or a blogger, but I don’t particularly need to see a Division I-A head coach let his freak flag fly solely so he can make a production out of celebrating how odd he is. It’s like he’s a sports talk radio host caught in a football coach’s body. To give credit where credit is due, though, Coach Leach has put together a complete team in Lubbock and is no longer entirely reliant upon soft scheduling and ludicrous aerial numbers for his success. Can he win on the road against a man who has done little of late to earn the nickname "Big Game Bob"? I’m not sure whether this has more to do with faith in Texas Tech or a lack of same in Oklahoma, but, either way, I’m going with the Red Raiders to cement their claim to the No. 1 ranking with a Norman conquest.

Those are my picks for tomorrow’s college football action on the national stage. Since my track record is what it is, the foregoing forecasts are for entertainment purposes only; no matter what your particular circumstances happen to be, you ought to take my weekly advice: Don’t Bet On It!