I had a 4-1 Saturday in last weekend’s S.E.C. picks---thanks a bunch, Wyoming!---so I come into the latest round of Southeastern Conference predictions sporting a pretty spiffy 56-13 record for the season, but that ledger, like Georgia’s early season run defense, is a mirage. Accordingly, I feel the need to reiterate my usual admonition, which I urge you to heed: Don’t Bet On It!

Here are this week’s S.E.C. picks for games not involving the Deep South’s oldest football rivalry. Each of these games is scheduled to be played on Saturday, because that’s when real spouse-biting, neighbor-shooting Americans play their football:

Louisiana-Monroe at Ole Miss: I am starting with this game because, frankly, it is the easiest pick of the week. It’s obvious that the Rebels are going to lose. In fact, I’ll come right out and say it: Houston Nutt is going to order his team to throw the game! That’s right . . . the fix is in and Ole Miss is taking a dive. Coach Nutt may be crazy, but he is crazy like a fox and he knows the way it works. The Rebs’ division rival in Tuscaloosa is enjoying an undefeated season and a No. 1 ranking right about now and what did the Tide do against U.L.M. last year? Exactly! Lose to Louisiana-Monroe this year, go undefeated next year. There is empirical evidence and everything. Of course, ‘Bama hasn’t gone undefeated quite yet, so maybe it’s not a sure thing. Just to be on the safe side, I’m going to go with Mississippi to win at home. 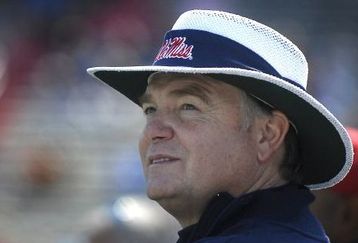 Still, I wouldn’t put it past him to try that whole losing-to-Louisiana-Monroe-so-he-can-go-undefeated-next-year thing.

Troy at Louisiana State: This is a tough one for me. A Tony Franklin joke would only be funny if the former Trojan offensive coordinator was still employed at Auburn. Les Miles jokes are no longer funny now that we all have been forced to acknowledge that he’s actually a darned good football coach. A Troy?-of-course-L.S.U.-can-beat-Troy-‘cause-Troy’s-only-one-guy! joke would be nothing more than a modern derivation of the old they’ve-got-William-&-Mary-for-homecoming-but-Mary’s-playing-on-a-bad-ankle bit. Honestly, I’ve got nothing for this game, which is fine, because Troy can say the same. The Bayou Bengals will maul the Trojans.

Mississippi State at Alabama: Maybe it’s the fact that we’ve just come through a presidential campaign, but there is a part of me that would like to see Sylvester Croom and Nick Saban standing on stage at matching podiums engaged in a debate. I can picture Coach Croom turning to Coach Saban and saying, "I played for Bear Bryant. I coached for Bear Bryant. Bear Bryant was a friend of mine. You, sir, are no Bear Bryant." There are two problems with that scenario, though. First of all, you know Coach Saban’s retort would be to say, "I don’t have time for this"---all right, there might be another word after "this"---and walk off the stage. Secondly, Coach Saban is doing a pretty good impersonation of Coach Bryant this year, at least insofar as that whole winning-‘em-all thing is concerned, so I see no reason to doubt ’Bama in Tuscaloosa. Neither of these fellows has time for this pick.

Vanderbilt at Kentucky: Please, please, please tell me this game isn’t being televised anywhere. If it is, I think that’s simply cruel. You see, Tennessee has an open date this weekend, which means that, if this game is being televised, Phillip Fulmer will be forced to sit and watch it---whether, by "forced," I mean it in the sense of the he-is-a-loathsome-offensive-brute-yet-I-can’t-look-away Kramer portrait from "Seinfield" or in the sense of the experimental aversion therapy undergone by Malcolm McDowell in "A Clockwork Orange," I leave for your determination---while dreading his team’s inevitable losses to each of these clubs, neither of which is any longer an S.E.C. bottom-feeder. By the way, I’m taking the ’Cats to outduel the ‘Dores. 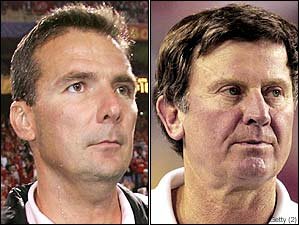 Who would have thought four years ago that I’d ever feel more animosity towards the guy on the left?

That’s how this week’s Southeastern Conference contests shake out, at least from my perspective. Your views to the contrary are, as always, most welcome, but, should you find yourself agreeing with any of the foregoing, let me disabuse you right away of any inkling you might have had of putting your hard-earned money on my prognostications. I’m bad at this, folks, so, whatever you do, please . . . Don’t Bet On It!