I am tanned pale, rested slightly less sleep-deprived than normal, and ready contractually obligated to provide this week’s Southeastern Conference prognostications. Following a Saturday on which my bold prediction of a Vanderbilt victory over Auburn vaulted me to a 4-1 record in last week’s S.E.C. picks, I now stand at 37-7 in league-wide forecasts overall, but don’t let my recent run of success fool you: I stink at this, and there’s only so long my luck can hold out, so, whatever you do . . . Don’t Bet On It!

All of this week’s conference contests will be played on Saturday, October 11, because, hey, what do we look like, the Big East? Here are the outings that could use a good picking:

Arkansas at Auburn: Shortly before bolting Oxford for the so-called Loveliest Village, Tommy Tuberville famously said that he would only leave Ole Miss in a pine box. Tubs subsequently went hunting in the Natural State and, evidently, bagged a job offer to coach the Razorbacks while sitting in a duck blind. How is it that he will be the second-smarmiest disloyal careerist in Jordan-Hare Stadium this weekend? I’m guessing that Coach Tuberville hasn’t yet forgotten a certain clandestine meeting in the Bluegrass State that cost the president and athletic director of the Alabama Polytechnic Institute their jobs, which ought to give the Plainsmen a little extra motivation to rout the Hogs. Smarter people than me don’t know what Auburn’s offense is, but I’m pretty sure the worst team in the S.E.C. is due for another drubbing. 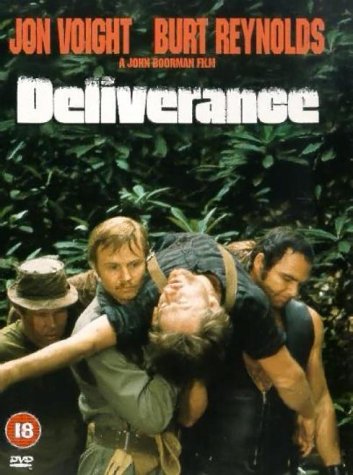 An inbred toothless hillbilly exhorting his helpless captive to "squeal like a pig"? Nope, no analogy to the Auburn-Arkansas game there!

Vanderbilt at Mississippi State: In order to save time, could Sylvester Croom go ahead and pass the S.E.C. coach of the year trophy off to Bobby Johnson during the postgame handshake? No fan base outside of Nashville will be rooting for the Commodores harder than the denizens of Bulldog Nation, as we want an undefeated and highly ranked Vandy squad rolling into Athens one week hence. I’m nervous, though. It’s not because Coach Johnson’s club ranks behind Coach Croom’s squad in passing offense, pass defense, total offense, total defense, first downs gained, and first downs allowed, although all of those things are true. It’s not even because the 2008 edition of Vanderbilt appears eerily similar to the 2007 edition of Mississippi State, although it does. It’s because I remember the 2005 season, in which Coach Johnson’s Commies leapt out to a 4-0 start, had bowl eligibility squarely in their sights, and lost to Middle Tennessee at home as a two-touchdown favorite. I think the ‘Dores are going to get caught looking ahead to a road game against one set of Bulldogs and are going to forget about taking care of business against the set of Bulldogs they happen to be playing this weekend. I like Vanderbilt, but I’m going with Mississippi State.

South Carolina at Kentucky: This is an intriguing matchup, and not just for the guys standing on the sidelines in polyester blazers scouting the game for the Music City Bowl selection committee. The Gamecocks have gotten their passing attack going---the Palmetto State Poultry lead the S.E.C. with ten touchdowns through the air---while the Bluegrass State Felines certainly have confirmed (for the first time in living memory) that, yes, there is a "D" in "Wildcat": U.K. stands atop the conference in scoring defense (7.8 points per game allowed) and the ‘Cats have surrendered a league-low two touchdown passes this season. We’ll see how much Kentucky’s defensive numbers have been inflated---or, I guess, deflated---by suspect competition when the Wildcats host the team that boasts the S.E.C.’s best third-down conversion percentage. My guess is that the ’Cocks will emerge victorious from the Commonwealth following a close contest.

If the Wildcats lose, Rich Brooks plans to give his team’s spirits a much-needed boost by taking his players out for Kentucky Fried Chicken to take their mind off of the game. This tactic will be of limited effectiveness.

Louisiana State at Florida: Rumor has it that Les Miles will be leaving his punter in Baton Rouge and going for it on every dadgum fourth down, baby! On paper, this looks like a clash of elite teams who routinely square off for harrowing showdowns, but looks sometimes are deceiving. Since falling to the Gators in 2006, the Fighting Tigers have put together a 23-2 ledger, whereas Florida has dropped five of its last 14 decisions, including---you can look it up---four of the last nine outings the Saurians have played within the borders of the Sunshine State. The Bayou Bengals are coming off of an open date and L.S.U. has taken three of the last four series meetings, while Urban Meyer’s club has struggled to get untracked, as the Gators failed to score in the first quarter against desiccated Hawaii, led defenseless Miami (Florida) by a 9-3 margin after three quarters, were outgained by a downtrodden Tennessee team while benefiting from Volunteer miscues, lost to mediocre Mississippi, and were up 17-7 against awful Arkansas with twelve minutes remaining in the game. The Tigers are going to romp in the Swamp.

For whatever they might be worth, those are this week’s S.E.C. predictions, in which you should place no stock whatsoever. Remember . . . I’m awful at this, so you rely upon my prognosticating skills at your own considerable peril. Succinctly stated, the governing principle is simple: Don’t Bet On It!