Share All sharing options for: The Dawg Sports Review of Rob Suggs's Look at Mark Richt and the Georgia Bulldogs 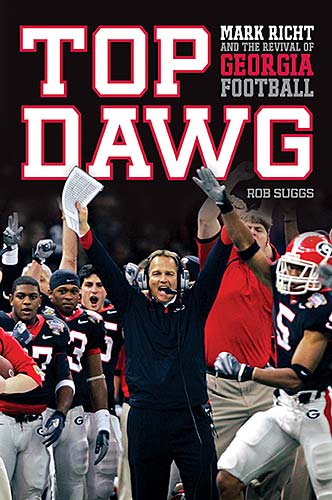 By now, you probably have read several reviews, and maybe even an interview, about Rob Suggs’s Top Dawg: Mark Richt and the Revival of Georgia Football (Thomas Nelson 2008). I recently was given the opportunity to read Suggs’s latest work and I wanted to add a few words of praise for the book, which you may purchase by clicking the cover image above.

Suggs begins by telling two tales simultaneously, charting the courses of a quarter-century in the lives of Mark Richt and the Georgia football program. The two initially followed parallel paths, moving first downward, then upward, commencing in the 1980s, before ultimately intersecting for the betterment of both.

Much of the story is familiar to all of us in Bulldog Nation; we have learned about Mark Richt’s background over the years, and, of course, most of us lived through the 20-year title drought between the 1982 and 2002 Southeastern Conference championships. However, Suggs gathers those data together in a single place for the first time and weaves a fluid narrative which shows the struggles of the young quarterback and the faltering football power as they each grappled with the false sense that the glory years were behind them.

Among the interesting nuggets Suggs drops into his story is this intriguing detail: two weeks before Vince Dooley stepped down as Georgia’s head coach in 1988, Bulldog defensive coordinator Bill Lewis was placed in charge of the East Carolina program. At the suggestion of future Georgia offensive coordinator Wayne McDuffie, Coach Lewis hired Mark Richt to be the Pirates’ offensive coordinator.

Of course, the search for Coach Dooley’s successor led to the consideration of George Haffner and the hiring of Ray Goff. Had Bill Lewis still been on the staff, it is not unlikely that the man who succeeded Erk Russell as Georgia’s defensive coordinator would have been offered the opportunity to fill Vince Dooley’s shoes, as well. If Coach Lewis had been named the head coach at Georgia rather than at East Carolina in 1989, might Coach Richt have been an assistant on the Bulldog staff more than a decade before making his eventual move to the Classic City?

Suggs tracks Coach Richt’s career through his tenure in Tallahassee while taking the reader through the frustrations of the Ray Goff and Jim Donnan years before bringing the two tales together. From there, the denizens of Bulldog Nation get to enjoy reliving the first seven seasons of the Mark Richt era.

Top Dawg takes the same approach as such sports books as Ben Brown’s Saint Bobby and the Barbarians, merging events on the field with background details, some of which are commonly known but explored in unusual depth and some of which we are learning for the first time. We are taken through the search process through which Coach Richt was hired, as well as his own efforts to assemble a staff of capable assistants.

Suggs’s short volume covers more than 20 years in a little over 200 pages, so there are times when the reader wishes for additional material, but Suggs provides a lively overview of Coach Richt’s tenure at Georgia. He paints a vivid portrait of what the famous mat drills were like, and how they helped not only to mold championship teams, but to remove the last vestiges of doubt from the athletic director’s mind that he had hired the right man. Writes Suggs:

[Richt] was so quiet, so polite in all those press conferences. He was a churchgoing man who prayed about every decision. You could imagine him as a Sunday school teacher, but could he be the guy to beat Phil Fulmer or Steve Spurrier? Dooley had wondered about that when he was considering Richt for the job, and he had put the question to Bowden: "Is Mark Richt tough enough?"

During the winter drills, Dooley stopped in and had a look. Later, during spring practice, he watched Richt crawl all over Fred Gibson, who looked as if his mind were somewhere else. Richt gave it to Gibson pretty good before exiling him to the locker room. Dooley later told writer Terence Moore that he wanted to sprint out onto the field and hug Richt at that moment.

Top Dawg is full of such gems and Georgia fans will enjoy reviewing a virtual highlight film of the last seven seasons while gaining a deeper appreciation both for how far the Bulldog football program has come and for the head coach who took the ‘Dawgs that distance.

Because Mark Richt’s story is one of religious redemption, our head coach’s Christian faith is a major theme of the book. The steadying influence of Coach Richt’s belief system recurs throughout Top Dawg, as well it should. I particularly enjoyed Suggs’s brief description of team chaplain Kevin "Chappy" Hynes, whom I had the privilege of interviewing last year, whose exuberant personality comes through even on the printed page.

Rob Suggs has put together an enjoyable account of Mark Richt’s and the Georgia Bulldogs’ separate journeys through the wilderness and their travel together out of the desert and into the promised land. If you haven’t yet taken the time to pick it up, do yourself a favor; whether for yourself or for that special Bulldog fan on your Christmas list, get a copy of Top Dawg and enjoy reliving the course that has gotten us this far and will take us even farther beyond, both in this life and in the next.