Urban Meyer: What a Bozo.

Share All sharing options for: Urban Meyer: What a Bozo.

You could write a book about all the nasty things people have to say about Florida coach Urban Meyer. I'm not going to get into those things here. I'm really not concerned with whether he lied to Jevan Snead or flagged a recruit's test scores because of sour grapes. While those stories, if true, would not reflect well on Meyer, there are generally two sides to these things. Also, being recruited to play Division 1-A football is the equivalent of diving on the Great Barrier Reef with baitfish in your pockets. You shouldn't be surprised if you see a shark or two.

But you know what really gets me about him? The fact that Meyer is an unrelenting killjoy. Take for example this quote from theGainesville Sun:

Florida's coach said after Wednesday's practice that the amounts of work the team, coaches and support staff have put in this year has been "overwhelming," and it's making a difference.

Ladies and gentlemen, what kind of a weirdo doesn't like children or clowns? That's borderline un-American. Remember, cheering for Urban Meyer means that the terrorists win. And the children lose. Just think of the children. 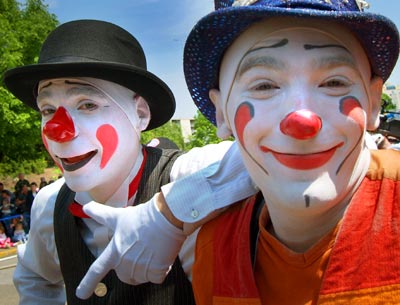 And the clowns. Don't forget the clowns. Hey, I think the one on the left is a Ronnie Wilson fan.

I'll be back tomorrow with the five things you'll see on Saturday. Until then . . .