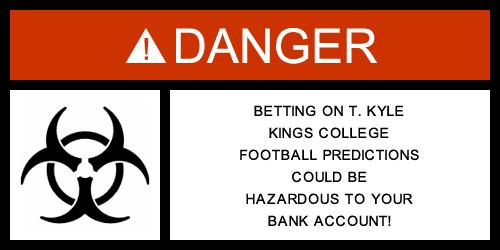 It’s official. The U.S. government now requires that my weekly college football forecasts be accompanied by a warning label. After my 3-3 record in last week’s S.E.C. predictions caused my ledger for 2008 to drop to 46-12, I should not have expected otherwise. If you don’t trust me, at least trust the Washington, D.C.-based bureaucracy that now joins me in telling you: Don’t Bet On It!

Arkansas State at Alabama: Go ahead. Say it. You know you’re thinking it. It’s all right. I understand. Really, it’s O.K. Go on. You’ll feel better if you do, honestly. That’s it. "Louisiana-Monroe! Ha ha ha ha ha!" Good for you for getting that out of your system. That was a nice moment for you. Seriously, we’re making real progress here. Meanwhile, the Red Elephants are going to roll all over the Red Wolves as the Crimson Tide cruise to victory. 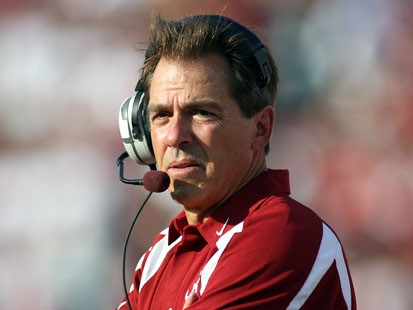 Tulane at Louisiana State: A lot of people give the Bayou Bengals a hard time for scheduling games like this, but I think it’s really swell of them. No, I’m not kidding. Here L.S.U. has an in-state rival that used to play in the S.E.C., a fallen former power that fancies itself a bit more academically upscale than it actually is, and the Fighting Tigers have the courtesy to continue playing this local onetime foe as though it still fielded a legitimate Division I-A football team. You know . . . basically the same thing we do for Georgia Tech. Louisiana State has big fun on the bayou.

Auburn at Ole Miss: The worst 4-4 team in America visits the best 4-4 team in America! With Tommy Tuberville in trouble, you don’t suppose the Mississippi faithful would like to see the Rebels put the final nail in Tubs’s coffin pine box, do you? Yeah, come to think of it, they just might, at that. The Rebs register a big win at home over their old coach. 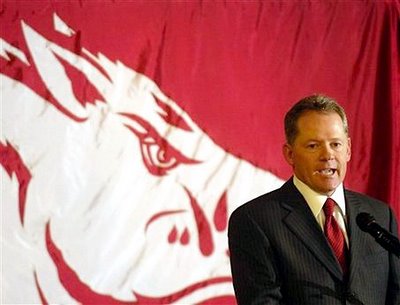 "Did someone say there might be an opening at Auburn?"

Tulsa at Arkansas: The intrigue! The drama! Gus Malzahn! Undercurrents underlying layers as the jilted offensive coordinator brings his high-flying attack back to the Natural State in an effort to have the last laugh! Whatever. At the end of the day, this is a Conference USA team playing a road game against a Southeastern Conference team. Arkansas wins. It’s 50/50 whether Bobby Petrino accidentally picks up the wrong headgear and wears an Auburn cap to the postgame press conference.

Kentucky at Mississippi State: It’s bad to lose some of your best players to injury. Believe me, I know. There are, however, worse things in the world than losing quality players to injury. One of those things is being a lousy football team even when you’re healthy. The truth about ‘Cats and ‘Dogs is that Kentucky is going to win this game. 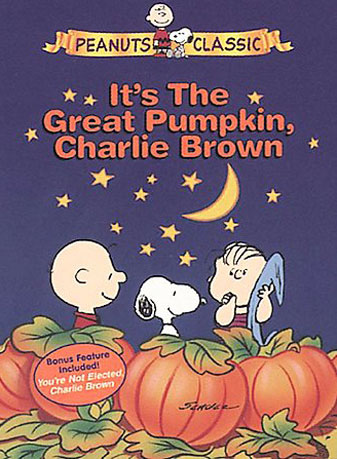 This week features both Halloween and a college football game coached by Phillip Fulmer. Consider yourself forewarned that a "Great Pumpkin" reference is virtually inevitable at this point.

Tennessee at South Carolina: I mentioned a minute ago how much Ole Miss fans would like to see the Rebels bring down the curtain on Tommy Tuberville’s career. Be that as it may, Steve Spurrier would really love to be the one who runs Phillip Fulmer out of the S.E.C. coaching ranks. The Gamecocks hold all the cards in this one---they’re playing at home; the Palmetto State Poultry are peaking while the Volunteers are fading; Coach Fulmer is bound to be tired on Saturday after visiting Linus Van Pelt and Sally Brown in the pumpkin patch on Friday night---so I’m taking South Carolina. You can’t spell "thumped" without U-T.

That, for what it is worth, is how it looks to me in the S.E.C. this week, at least with regard to games not being played within spitting distance of the St. John’s River. Although I hope you enjoyed my prognostications, newly promulgated federal regulations obligate me to reissue my standard disclaimer: Don’t Bet On It!