While the debate rages on about my BlogPoll ballot (to which I will be making revisions before the Wednesday morning deadline), I will take up the task of ranking not 25 teams, but twelve; namely, the dozen squads comprising the Southeastern Conference. That shouldn’t be too tough, right? Here goes:

1. Alabama: This is the easy one. The Crimson Tide are 8-0 and, while it took the Red Elephants a while to pull away in Knoxville, they left no doubt that they were by far the better team. When you’re the last undefeated team left in the S.E.C., you’re the top team in the league. (Those are the kind of keen insights you can’t get just anywhere, by the way.)

2. Florida: Bear in mind, I’m a BlogPoll resume ranker but this is the S.E.C. Power Poll, which explains why I have the Gators ranked higher than the ‘Dawgs. The Saurians and the Bulldogs share the same "best win," but U.F. annihilated the Bayou Bengals, whereas the Red and Black merely beat them convincingly. Florida appears to be hitting its stride more than any other team in the conference, so much so that I feel sorry for whichever team has to travel to the Sunshine State to play the Gators next weekend . . . hold on, wait a minute . . . oh, dang.

3. Georgia: The Classic City Canines appeared to flip the switch in Death Valley last Saturday. While I recognize that pride is a deadly sin, the Bulldogs have shown resiliency in the midst of adversity, and, while injuries have prevented this team from being all that we hoped it could be in the preseason, we’re starting to see more frequent flashes of what we expected. 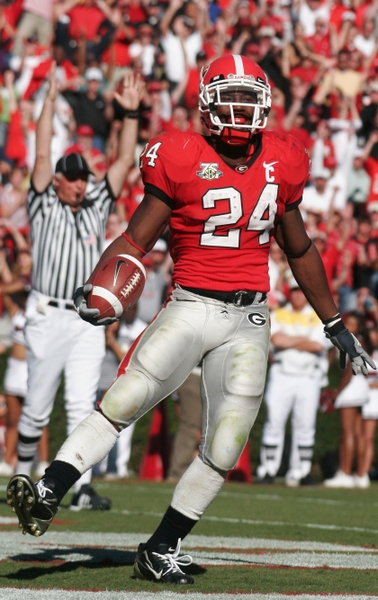 How can you be The Man when Knowshon Rockwell Moreno is The Man?

4. Louisiana State: O.K., clearly, there’s a bit of a gap between the top three teams in the S.E.C. and the fourth-best team in the league. (I’d estimate that gap to be between 14 and 21 points separating third from fourth and 30 points separating second from fourth, but those are just approximations.) Still, the Bayou Bengals are a team you wouldn’t want to run into in a dark alley or a New Year’s Day bowl game. Also, their fans don’t hate us, which is nice.

5. South Carolina: The Gamecocks are as tough and scrappy as their namesakes. You may beat ‘em by a touchdown, or they may beat you by a touchdown, but, either way, it’s going to be a battle for 60 minutes and, afterwards, you’re going to know you’ve been in a fight. The Palmetto State Poultry field perhaps the fiercest defense in the league. They’re just trying to take ‘em one game at a time and do what they can to help the ball club, but they’re staying within themselves and . . . oh, sorry. I kind of got off on a cliché tangent there. I’m thinking of writing a new song for Jimmy Buffett called "Changes in Attitudes, Changes in Platitudes."

7. Kentucky: Not since he was operating alongside Hawkeye Pierce and Trapper John McIntyre at a mobile army surgical hospital in Korea has Rich Brooks seen so many combatants lost to injury. (All right, I admit it; I have no idea if Coach Brooks really served in the Army during the Korean War, but, honestly, it seems like he should have, doesn’t it?) The Wildcats’ depth issues were exposed in a big way last weekend and it won’t get much better from here for U.K. Here beginneth the race to the bottom, which ultimately will end with my final S.E.C. Power Poll ballot explaining of my seventh-ranked team, "Hey, they can’t all be twelfth!" 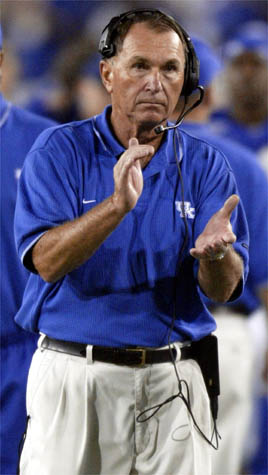 Coach Brooks applauds my evaluation of his team. I’m pretty sure his clapping is sarcastic.

8. Vanderbilt: The Commodores are hanging on by their fingernails. You know, I know, and the American people know that the annual Vandy bowl flirtation is over; when you can’t beat Duke at home to attain bowl eligibility for the first time in more than a quarter of a century, you can stick a fork in your season, ‘cause it is done. (It’s official; this is now the laziest writing of my blogging career. If I keep this up, I could be Stewart Mandel.)

9. Arkansas: Yes, I know the Razorbacks are just 3-5, but they’re a team on the rise. The Hogs clearly are making progress, and I fully expect the next Arkansas coach to inherit an improved program when Bobby Petrino bolts for his next gig in the dead of night.

10. Auburn: Remember how I said Ole Miss might be the best 4-4 team in the country? Well, the Plainsmen might be the worst 4-4 team in the land. Given the Tigers’ penchant for upsetting higher-ranked Georgia teams, Tommy Tuberville’s club scares me to death. Thank goodness we get to play the game at Jordan-Hare Stadium!

11. Tennessee: Right about now, being a Volunteer fan is a lot like being a Michigan fan, only with better manners and more inbreeding. Both fan bases find themselves looking back wistfully to the halcyon days of 2005 and wondering whether the crusty old curmudgeons they nudged aside for their current coaches would be willing to come back to the sidelines to give it one more whirl. Oh, by the way . . . go vote in the Rocky Top Talk poll! 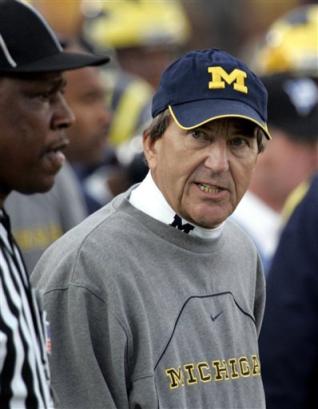 Lloyd Carr greets my suggestion with what qualifies by his standards as an upbeat attitude.

12. Mississippi State: Dudes . . . you lost to Tennessee! If you keep this up, don’t think we won’t kick y’all out and go poach South Florida from the Big East!

While I trust those rankings are a lot more straightforward than my BlogPoll ballot, there still is room for reasonable disagreement, so, by all means, let me know where you think I’ve erred . . . about the rankings, that is, not the writing. I know the writing stunk, but, trust me, there’s a reason; three-fourths of the members of my household, including me, are (like Todd) fighting off seasonal colds. I felt so badly yesterday morning that I went in to work in jeans and a sweatshirt. I actually considered dropping an Airborne into my cup of coffee when I got to the office. So, yeah, I know this wasn’t my best work, but, in my defense, I’m 87 different kinds of under the weather, so cut me some slack, O.K.?