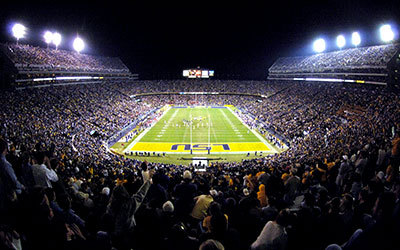 Even though I walk through the valley of the shadow of death, I will fear no evil.

Well, I told you it wouldn’t be easy!

Before beginning what will be a briefer encapsulation of the previous day’s game than usually is the case, I would be remiss if I did not congratulate Louisiana State on a tough, hard-fought game of football. The Fighting Tigers trailed by seven points 20 seconds into the first quarter, by 14 points five seconds into the second quarter, and by 21 points fewer than five minutes into the fourth quarter.

A lesser team than the Bayou Bengals would have folded, surrendered, and been blown out of its own building. It is to the credit of the defending national champions that the L.S.U. players and coaches never quit. They continued to fight for every last one of the 60 minutes of a game in which they never led, letting the victors know that their triumph was a meaningful one over a valiant foe and making it plain that, although Georgia won, they certainly had been in a fight.

Because 3:30 kickoffs require me to meet my parental obligations while watching the game, I was unable to participate in the open comment thread, but my review of that streaming commentary over the course of the contest leads me to believe that I felt a good deal better throughout the game than many in Bulldog Nation.

Obviously, a team has been guilty of more than a couple of defensive breakdowns in any game in which it gives up 497 yards, 21 first downs, and 38 points, but let’s give credit where credit is due here: Georgia picked off a trio of Jarrett Lee passes, turning two of them into Darryl Gamble touchdowns, and the Bulldogs never led by fewer than 14 points at any juncture after A.J. Green’s 49-yard touchdown reception with a little over eight minutes remaining in the third quarter. When Knowshon Rockwell Moreno went 68 yards for a score with a little under 19 minutes remaining in the game, this one effectively was a done deal.

Yeah, it remained a shootout; Louisiana State is too tough, too disciplined, too physical, too talented, too well-coached, and too accustomed to winning not to hang with virtually anyone they play, particularly at home. Sometimes, though, it’s just your day.

Every dog has its day, and, on Saturday, the ‘Dawgs had theirs . . . not for the first time and not for the last time, but certainly this time.

The Red and Black went on the road to face a darned fine team, played a darned good game, and got out of Death Valley with the biggest win they have notched in a year, maybe longer.

I tip my cap to the Fighting Tigers, who demonstrated why Death Valley is such a daunting place in which to play. They are a fine team and beating them is an achievement of significance. The Louisiana State faithful shouldn’t feel badly about this one, and neither should the denizens of Bulldog Nation.

Now let’s forget all about it and focus on next week, when the Eastern Division championship almost certainly will be settled and, in all likelihood, the winner will earn the right to play for a whole lot more.