Share All sharing options for: The Mark Richt Victory Watch

In the game in which he tied Harry Mehre for the third-most games coached in a Georgia career, Mark Richt claimed his 79th win to move within 122 victories of matching Vince Dooley for the school record.

By improving his ledger to 79-20 after 99 games, Mark Richt remained well out in front of his peers, none of whom had matched his success at the same juncture in their respective careers in the Classic City. Harry Mehre (59-34-6), Wally Butts (71-25-3), and Vince Dooley (66-28-5) all trailed Mark Richt after as many games. 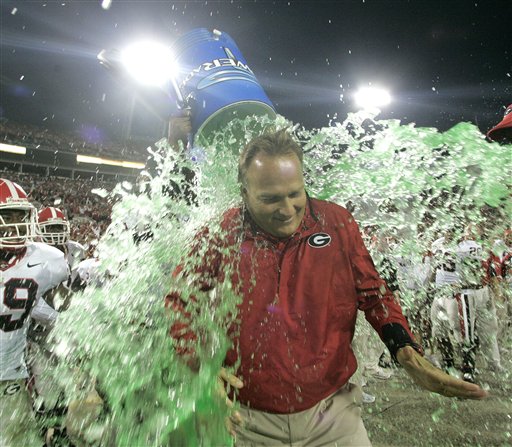 The victory improved Coach Richt’s road record to 28-4 and gave him at least one win in each of the eleven Southeastern Conference stadiums in which he has coached. (The Swamp, obviously, is the one on-campus arena in the league into which he has never led a Bulldog squad.)

Georgia has now won six of the last eight series meetings with L.S.U. and 14 of its last 15 games overall. Since falling to the Bayou Bengals in the 2003 S.E.C. title tilt, the Red and Black have gone 3-0 over the Fighting Tigers, outscoring them by a combined margin of 131-68.

This was as big as it gets, boys and girls . . . well, unless you count the fact that next week just got even bigger.