This week, we put the cart before the horse by declaring the national game of disinterest early, but it is now time to settle back into a more ordinary routine by looking at this week’s S.E.C. outings.

Although none of last Saturday’s Southeastern Conference contests was quite the runaway that I expected, I still managed to go 4-0 in last week’s predictions to improve to 43-9 for the season . . . and that’s not even counting my precise forecast of the final score for Georgia’s homecoming win over Vanderbilt!

Here are this week’s S.E.C. showdowns not involving the ‘Dawgs, all of which will be played on Saturday, October 25, unless otherwise indicated: 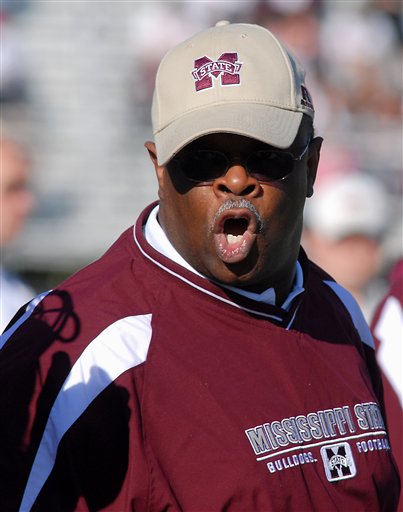 Mississippi at Arkansas: Each of these teams sports an overall record of 3-4 and a conference ledger of 1-3, so why does it feel like the Rebels are having ten times the season the Hogs are having? This is just a theory, but it might have a little something to do with the fact that Mississippi sustained close losses on the road against Alabama and Wake Forest, while Arkansas carded come-from-behind wins over Western Illinois and Louisiana-Monroe. Still, Bobby Petrino’s Razorbacks showed signs of improvement in a win at Auburn and a one-point loss at Kentucky, so this ought to be a ballgame. What makes this matchup really interesting, of course, is the bad blood that festered between the Arkansas faithful and their former coach. Houston Nutt, whose sideline gesticulations resembled those of a cocaine-addled Pentecostal preacher with an itch in a place he couldn’t quite reach even before his fan base wisely advised him to eschew the running game when all he had in the backfield were Darren McFadden and Felix Jones, is apt to make the most of his opportunity to teach Pignocchio that life in the Natural State is solitary, poor, nasty, brutish, and short as the Rebels knock off the Razorbacks on the road.

Duke at Vanderbilt: If the Commodores don’t pull this one off, I’m probably going to hear about it from FSUncensored and dpearson6, aren’t I? The Blue Devils may have a bit of an edge, given David Cutcliffe’s familiarity with the Commodores following his lengthy coaching stints in the Southeastern Conference, but this game will come down to the Commies’ ability to do simple math. Bobby Johnson said it best: "Our guys can count." The ‘Dores have five wins and five remaining games. These are they: Duke, Florida, at Kentucky, Tennessee, and at Wake Forest. Of these, only the game against the Gators appears absolutely out of reach, but there’s no question that a homecoming game in Nashville against the Dukies represents Vandy’s best chance to become bowl eligible. I find it hard to believe that the Music City Sailors will let that golden opportunity pass them by, so I’m picking the Commodores. 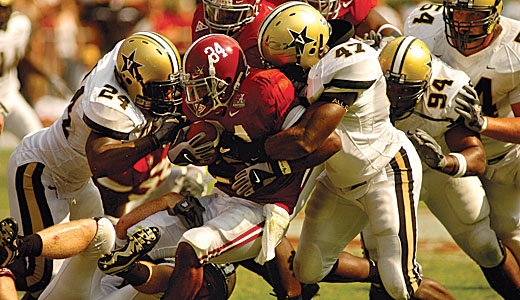 The honor of the Southeastern Conference good order of the comment thread that follows this posting is at stake!

Kentucky at Florida: Not to get all John Belushi on you or anything, but check out the Wildcats’ sick list: Derrick Locke? Done! Myron Pryor? Done! Micah Johnson? Done! Marcus McClinton? Done! Dicky Lyons? After a twelve-year college career, finally done! (O.K., Pryor, Johnson, and McClinton are merely questionable. I’m working on a theme here, people. Do you mind?) Is this a good position for U.K. to be in as the team heads into Gainesville as the homecoming opponent for a well-rested Gator squad coming off of an open date? Uh, I’m thinking no. Florida makes it 22 in a row over the ‘Cats. Whether Rich Brooks and his Delta Tau Chi fraternity brothers crash the pregame parade remains open for debate, however.

Alabama at Tennessee: Not to be overly technical or anything, but isn’t this the fourth Saturday in October? I guess that whole "third Saturday in October" thing is just an historical numerical designation with no latter-day significance. You know, like the fourth position in ballet or the Tenth Amendment. It goes without saying that ‘Bama is by far the better team, but, then again, the Gators were better than the Rebels, too, right? The Crimson Tide struggled with Kentucky and Ole Miss, the Volunteers have revenge on their minds after last year’s 41-17 thumping, and Phillip Fulmer’s job is on the line. The game is in Knoxville, where the Big Orange have been 5-1 against the Red Elephants since 1996. Last week, Tennessee ran it up the middle effectively and, this week, Alabama will be playing without Terrence Cody. No one is getting through the S.E.C. unscathed this year and, this Saturday, the Vols seem to hold all the cards. I’m taking Tennessee to register the upset. 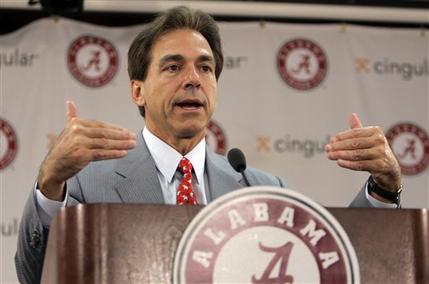 Auburn at West Virginia (Thursday, October 23): Right and wrong are not relative, but there are varying degrees of incorrectness. There’s the minor wrong of transposing the last two digits when you dial a phone number and there’s the major wrong of the labor theory of surplus value. There’s the minuscule mistake of typing "your" when you mean "you’re" and there’s the colossal misapprehension of Albert Camus’s The Myth of Sisyphus. It is into the latter category reserved for the enormously erroneous that my preseason prediction regarding this game falls:

Auburn is going to be good. Both teams should be undefeated heading into this one, since the Plainsmen get L.S.U. in the so-called Loveliest Village to renew a rivalry in which the home team has won eight straight and the Tigers’ first two road games are in Starkville and Nashville, while the Mountaineers should cruise through their first six opponents. Both teams get a dozen days to get ready for one another, but, whereas W.V.U.’s preparations will be led by caretaker coach Bill Stewart, the War Eagle’s game-planning will be guided by Tony Franklin (who will have had seven Saturdays followed by an open date within which to install the offense that worked so well in the Chick-fil-A Bowl).

In the words of Harry Doyle, "Just a bit outside!" Let’s see, now . . . Auburn isn’t good, neither of these teams is even remotely close to being undefeated, the Plainsmen didn’t beat Louisiana State, the Tigers barely won in Starkville and didn’t win in Nashville, West Virginia has struggled with just about everyone (including Syracuse), and Tony Franklin was fired seven games into his tenure as A.U.’s offensive coordinator. I was, however, right about the twelve days, but, hey, I’m a lawyer; counting days on a calendar correctly is an integral part of what I do for a living. Out of that airtight bundle of tightly-wound inaccuracy there has escaped just this much that was correct, though: Auburn will win this ugly, ugly game.

Those, my friends, are this week’s Southeastern Conference contests and my forecasts concerning the outcomes thereof. I hope I managed to amuse and inform you a little, but, regardless of whether I did, I trust I at least managed to pound this important message into your brain: Don’t Bet On It!