A Dawgsports Public Service Bulletin: Could Somebody Throw Asher Allen a Wombat?

Share All sharing options for: A Dawgsports Public Service Bulletin: Could Somebody Throw Asher Allen a Wombat?

Yes. I know. I promised you that I would help you get to know Les Miles. But there are more pressing things facing Bulldog Nation. As you may have heard, Willie Martinez's defense has had the dropsies lately. Especially during last Saturday's win against the Vanderbilt Commodores.

I for one was up into the early hours of Sunday morning trying to figure out why. First I blamed myself. On Saturday I wore the same shirt which had brought victory against Tennessee (I'd jettisoned my previous golfshirt after the home game of which we do not speak, but which involved dark clothing and John Parker Wilson, for one night only, refusing to be a walking, talking bouncy-banged interception dispenser). Was that it? I ate the same gameday lunch that had coincided with a solid effort against Arizona State (two slawdogs, fries and a Coke from the Nu-Way Weiner). Surely the lunch of the gods couldn't be implicated.

Then I began casting about for other, more distant  scapegoats. How could I pin this one on DAve Akins? I couldn't. Dave clearly had a ticket to the Tennessee game, and we won, thereby exonerating our fellow blogger.

What about Mackenzi Adams? I'm naturally distrustful of men with preppy sounding names which end in an "i". Probably goes back to my south Georgia upbringing, where I knew several girls named "Nikki", "Shelli", "Wendi" and "Brandi", but never a boy named "Mackenzi". Especially not one who played football. Because if I had, I definitely would have harrassed him unmercifully for having a girl's name. But I digress. Was it that Vanderbilt's newly minted starting quarterback was throwing the ball too hard? Too soft? That is what you would expect from a quarterback named Mackenzi, after all. 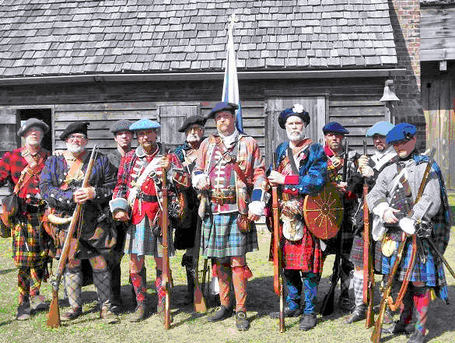 This is a picture of my Scottish forebears, cynically mocking Mackenzi Adams for the arguably effeminate spelling of his traditionallyScottish name. Or maybe they're doing something else cynical. They are Scottish after all. Cynical is kind of our thing.

But that's probably not it. Both Reshad Jones and Darius Dewberry each picked off an Adams throw. These exceptions, while not definitively disproving the rule, certainly make it seem less plausible.

But then, as I was reading the Athens Banner Herald online, Asher Allen, inadvertantly perhaps, made it all crystal clear. "My brother was in town for the game and right when I came inside the door, he threw a pillow at me," Allen said. "He was like 'Asher, what are you doing?' The whole day he was throwing inanimate objects at me."

That's it. I've found the problem. Our coaches have been having the players practice by catching inanimate objects. Everybody knows that if you really want to improve your ball skills you have to work with animate objects. How did our staff miss this?

So, in furtherance of the cause, I thought I'd suggest a few animate objects that the coaches may wish to work with in the coming days to tune up for LSU. They can certainly thank me later. I'm just a patriot trying to help the cause here:

1) Wombats: Large claws. Big rodent-like front teeth. Shaped like oblong fur-covered footballs. Pro: If you can catch a Matt Stafford thrown Wombat then you, sir, are what is colloquially known as a "badass". Con: Aforementioned claws. Given that most of our players already have a knack for  personal destruction straight out of The Happening, the addition of aggitated quadrapeds can only end badly. 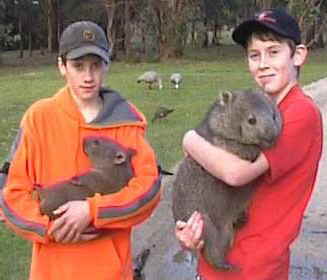 Wombat catching. So easy a Clemson fan can do it.

2) Joe Paterno: I know, this is flirting with the whole animate/inanimate distinction. But on the positive side, he doesn't move that fast, so he should be easy to grab, just to kinda get the guys used to the drill. Con: Devours human brains. Again, unacceptable injury risk. 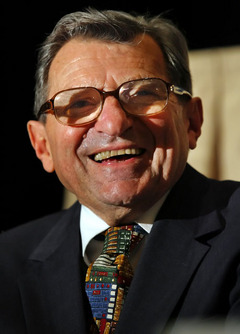 You'd be smiling too if you'd just sucked the life out of the graduate assistant who came to let you know your team is up to #3 in the polls. Geezers represent!

3) Jessica Simpson: Matt Stafford's already a fan, and her boyfriend is the quarterback of an NFL team that would qualify as a disappointment, except that's an insult to disappointing people everywhere America's Team. Surely some football knowledge has rubbed off. The downside? No problem getting players to lock up, but convincing them to let go may be an issue. Booo, sexual battery.

These are just to get the conversation started. Clearly we've got to find something to stop Dropapalooza '08 before someone starts printing commemorative teeshirts. Anybody have a better suggestion? I'll be back this afternoon with your weekend cocktail. Until then . . .