Getting to know . . . Bobby Johnson, Menace to the Blogosphere.

Share All sharing options for: Getting to know . . . Bobby Johnson, Menace to the Blogosphere.

Perhaps it would be unfair to characterize Vanderbilt coach Bobby Johnson as a dull man. But I can't imagine why on Earth that would stop me. I have to be honest. Since I started doing this post, I've reached pretty far in the name of comedy. I've accused Central Michigan's coach of being a former  muskrat trapper. I've insinuated that Georgia Southern's Chris Hatchermakes up inappropriate parody lyrics to emo tunes.

But Bobby Johnson is a hard case. Why? Because there's nothing funny about the guy other than his steadfast refusal to do funny stuff. Because Bobby Johnson makes Rich Brooks look like the wacky lovechild of Britney Spears and Dennis Rodman. The man's idea of "wild and crazy" is going with the apple cinnamon oatmeal rather than plain Quaker oats. He's congenitally boring.

Sure, it was never easy for him. Navin R. Johnson* was born a poor black child, who spent his evenings sitting on the front porch with his family, singin' and dancin' down in Columbia, South Carolina. How can you not feel sorry for someone who spent their formative years in Columbia?** Poor bastard.

Johnson persevered however, and was named the head coach at Furman University in 1994, where he served for nine years. Furman, for the uninitiated is a nice, prestigious little private school in South Carolina. While there Johnson led the esoterically nicknamed Paladins to the Division 1-AA national championship game. This success led to Johnson's hiring to coach the Vanderbilt Commodores, a team hailing from a nice, prestigious, somewhat larger private school in Tennessee, possessing an only slightly less esoteric nickname. See a pattern here?

Other than the fact that Johnson earlier played and coached at Clemson (which he led in interceptions from his cornerback slot in 1971 and 1972) the man's football career has just been dull. No Bobby Petrino job swapping soap operas. No Barry Switzer bourbon soaked hijinx.

Not even a JoePa-esque history of player arrests. Bobby Johnson won't be appearing on "Outside The Lines." The Commodores' Commodore just doesn't color outside the lines. Bobby Johnson is the kind of guy who eschews Splenda in his coffee, deeming it "unnatural" and "risky". To paraphrase Winston Churchill, Bobby Johnson has all of the virtues we bloggers despise and none of the vices we adore. 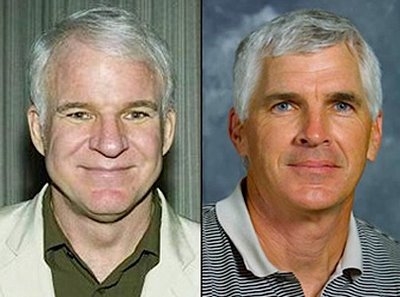 Yeah, they look a bit similar. Big woop. Call me when somebody hires a head coach with the personality of Richard Pryor, circa 1976. Now that could be interesting. This? Dull.

Now, Bobby Johnson probably doesn't think of himself as a dull person. BJ probably views himself as full of vim and vigor. But the rest of us know the truth. Vanderbilt has no Pete Carroll brand wide eyed motivational schtick. No Dan Hawkins new age psychobabble. Bobby Johnson is the Mueslix of BCS conference coaches. No scandals. No suspensions. Wins enough to be a respectable, lovable underdog but not so much that it raises eyebrows. Just a smorgasbord of dull. Bob Dole thinks Bobby Johnson is dull. And John Tesh agrees with him.

In fact, as a member of the blogging community, Bobby Johnson scares the bejeebus out of me. Why? Because he's bad for business. I'm terrified by the prospect that Bobby Johnson is not only himself hopelessly dull, but may in fact be a carrier of the dull pathogen. If it ever spreads to Knoxville, Oxford or Clemson, Kyle and I will have to go back to practicing law full time. Do you see the peril here? Do any of us really want that?

So, for Heaven's sake, if you can get within range of Bobby Johnson, slip a little something in his oatmeal to loosen him up. Anything. Brown sugar would probably do the trick.

*Yes, the Steve Martin character from The Jerk was named Navin R. Johnson. Did the R stand for Robert? I don't know. And I'm not about to research the answer now.

**Except Darius Rucker. As best I can tell, his life consists of playing in celebrity golf tournaments and cashing royalty checks. I'm not sure I can muster a lick of sympathy for Hootie. Though Fairweather Johnson was a much better album than it ever got credit for, for what little that's worth. I'm also fairly certain that Fairweather Johnson is the guy who's backing up Casey Dick as Arkansas's quarterback right now. He's Robert's little brother.