The Scapegoat Has Been Identified and He Must Be Destroyed!

Share All sharing options for: The Scapegoat Has Been Identified and He Must Be Destroyed!

(Author’s Note: What follows is satirical and intended as humorous. I stress this from the outset because, if you don’t know that going in, you might think I am actually advocating the hunting down and killing of a fellow human being, which I am not. If you want to give the object of my disdain a punch in the arm with your knuckle out, though, go ahead, ‘cause he has it coming. Just don’t kill him, really.)

I mentioned in my postgame report that I tailgated at Tent City with Doug Gillett and his friends, including DAve Akins (yes, "DAve," not "Dave"; it’s his thing, let him have it) of Bloggerpalooza ‘08 renown. After the game, I sent Facebook (yes, Facebook) messages to my hosts, including DAve, thanking them for having me. To DAve, I wrote the following:

Right up until kickoff, Saturday was one of the great days ever. It was all downhill from there, of course, but I had a good time hanging out with y'all at Tent City.

Naturally, I wrote Scott and Meimi to thank them for their hospitality and let them know that I regretted the fact that the obvious jinx of me tailgating with all of you prevented me from ever hanging out with any of you ever again.

That's unfortunate, of course, but sometimes you have to take one for the team.

I'll see you in the next life and/or whenever the rational part of my brain resumes control of my behavior. It's a close call which will come first.

Trust me Kyle; If there's any jinx going, it's because of me.

Saturday was the fifth occasion in which I tailgated at Tent City but didn't go to the game and instead watched it on TV.

Good to see you sir, nonetheless. Hope this bye week gives us all a well-deserved respite.

Naturally, this exchange led me to an inescapable conclusion:

Dude! I saw the Bulldogs lose at Columbia twice and that was all it took to convince me never to go back! Two home losses while "College GameDay" was in Athens? Don’t let Chris, Lee, and Kirk come back ever! Paratroopers bringing in the ball for a night game? Cool effect, but it dooms the ‘Dawgs, so cut it out already!

But five times? To paraphrase Paul Reiser, if I dropped an anvil on your head every time you ordered the fruit cup, would it take you five times to figure out the cause and effect relationship and quit ordering the fruit cup?

Look at that list again: Georgia is 37-6 at home since the loss to Auburn between the hedges in 2001, and, of those six losses, DAve tailgated at Tent City before, but failed to attend, five of them! Come on, DAve, what do you need to get the message? Writing on a wall? Dry fleece on wet ground? Silent Bob screaming the correct answer in your face?

Clearly, the problem is DAve tailgating in Athens but not going to the game. As I see it, we can address this in one of three ways:


The first option is untenable. If DAve wants to tailgate with his friends, he should be allowed to do so. The second option is impractical. It shouldn’t be incumbent upon the rest of us to buy DAve a ticket just to stave off the inevitability of a Georgia loss.

Therefore, the only reasonable solution is to kill DAve. Stop him before he jinxes again.

It is for the good of Bulldog Nation that I hereby declare a jihad against DAve Akins . . . or maybe it’s a fatwa . . . O.K., I’m not really up on the terminology, but you know that thing that happened when Salman Rushdie wrote that book and every member of a certain sect of Islam was supposed to want to kill him? We’re doing that thing, only with DAve.

Here is a recent photograph of DAve: 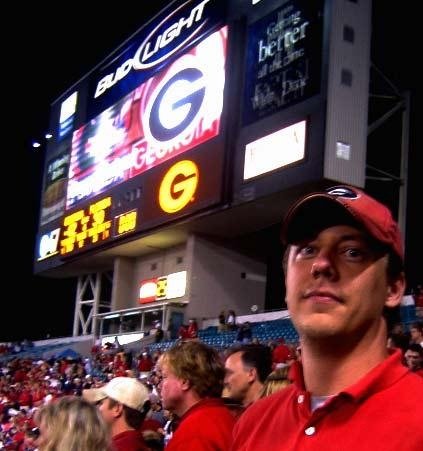 DAve’s in the foreground. Kill him. The scoreboard and the other spectators? They’re cool; leave them alone.

MaconDawg and I haven’t yet gotten around to getting Dawg Sports T-shirts printed, but, when we do, we’ll be giving a free T-shirt to the reader who kills DAve. This has to be a confirmed kill, though, folks, so, if you kill him, strap him to the hood of your car like a deer and bring him to my house so I can know for sure.

Wait . . . I’ve got kids, and they probably shouldn’t see that. All right, take DAve’s dead body to MaconDawg’s house. He’ll verify it for us, you’ll get a T-shirt ("I Saved the Season By Killing DAve and All I Got Was This Lousy T-Shirt," perhaps), and the Bulldogs will run the table.

Everybody goes home a winner. Except for DAve. Who deserves to die.

Let’s put this open date to good use, people. You don’t have a game to go to on Saturday, so use the bye week to hunt down DAve and kill him. If the manhunt goes past that point---which it may (you can tell by looking at him that DAve’s wily)---we will need to maintain our focus, so, until DAve has been killed, we need to change our kickoff chant from "Goooooooooo ‘Dawgs! Sic ‘em! Woof! Woof! Woof! Woof!" to "Kiiiiiiiiiill DAve! Kill ‘im! Kill DAve! Kill DAve!"

(Permit me to re-emphasize: I’m just kidding. Don’t kill DAve. Really, seriously, don’t do it. But, for crying out loud, if you see him at your tailgate, get the man a ticket!)